Aston Martin’s sports cars are generally considered the preserve of the super-rich given that they start at about $200,000 and are best known for zooming James Bond around. But investors will soon get a chance to own a piece of the glamour after the iconic British auto company announced plans on Wednesday to go public on the London Stock Exchange.

The public offering, which Aston Martin Lagonda Ltd. hopes to complete this year, is expected to value the company at around £5-billion ($8.4-billion), and it’s the latest step in a remarkable transformation of the 105-year-old car maker that’s been featured in 12 Bond films but also has a long history of financial turmoil and mismanagement. After going bankrupt seven times, Aston Martin is currently enjoying record sales, surging profit and an expanding production line that will see it open a second factory next year in Wales, about 200 kilometres from the current plant outside Birmingham, England. It’s also expanding its brand into a host of new areas including submarines, powerboats and condominiums.

The turnaround has been led by chief executive Andy Palmer, a former Nissan Motor Company Ltd. executive from Britain who joined Aston Martin in 2014 and immediately launched a sweeping reorganization. Dubbed the “second century plan," Mr. Palmer overhauled the company’s offerings, including updating the DB9 series into the DB11, and launching several new models such as the DBX sport-utility vehicle and a luxury electric car. He’s also pushed into the high-performance ranks with the Formula One inspired Valkyrie, a limited-edition car that sells for around $4-million. And there are plans to take the brand much further.

Aston Martin is working on a three-person submarine that’s capable of diving down 500 metres and costs about $6.7-million. It’s also developing a 37-foot powerboat that can hit speeds of 50 knots, or around 93 kilometres an hour. And it has partnered with developers in Florida to build luxury apartments along the Miami waterfront that include helicopter pads, a super-yacht marina and private outdoor pools in penthouse units.

Part of the success is because of the growth in demand from super-rich customers, particularly in Asia, who’ve long since recovered from the 2008 financial crisis. The soaring demand has allowed the company to push through price increases of 8 per cent on average this year and it’s also expected to help shield Aston Martin from the vagaries of Brexit. Mr. Palmer said on Wednesday the company would likely be able to pass along any tariff increases that come as a result of Brexit, and he played down the overall impact of Britain’s departure from the European Union next year. "If there is a tariff into Europe, it’s countered by a tariff into the U.K. for our competitors, so you might lose a little bit of market share in the EU, but you pick it up in the U.K.,” he told Reuters.

Mr. Palmer has long favoured an initial public offering for the company, which has endured years of unstable ownership. But there are pitfalls. The company is planning to float 25 per cent of its shares on the London Stock Exchange, but the offering won’t raise any new money for the business. That’s because the shares are coming from the current owners, a group that includes Italian and Kuwaiti investment funds as well as Daimler AG, which holds a 4.9-per-cent stake and will remain a shareholder.

The company also hopes to replicate the fortunes of Ferrari NV, which went public in New York in 2015. Ferrari’s share price has jumped from US$52 to US$130, giving it a market value of US$24.5-billion. The Italian car maker made a profit of US$645-million last year and produced around 8,400 cars. With estimates pegging Aston Martin’s value at around £5-billion ($8.4-billion), some analysts say the shares will be expensive relative to Ferrari. They point to Ferrari’s trailing price-to-earnings ratio of 38 times, compared with the Street’s P/E estimate for Aston Martin of 65 times. Russ Mould, investment director at London-based AJ Bell, said the premium to Ferrari is “hard to justify” and he cautioned investors to be careful about getting caught up in the Aston Martin story. “After all, the brand’s first appearance in the Bond films saw 007 drive his DB5 straight into a wall in Goldfinger’s Swiss factory while the spy’s DB10 ended up at the bottom of Rome River Tiber in the last film, Spectre, so accidents can and do happen,” he said. 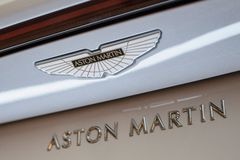 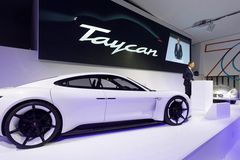 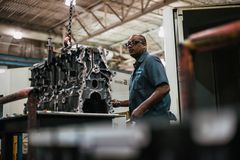