The automotive layoffs in Ontario continued to mount on Monday as the strike by 49,000 General Motors Co. workers in the United States halts the cross-border flow of parts and vehicles.

GM stopped engine assembly work at its plant in St. Catharines, Ont., on Monday, sending another 725 people home as the strike by the United Auto Workers shuts down more than 50 U.S. factories and warehouses.

About 5,300 Unifor union members are laid off, including 3,300 at GM and 2,000 at the companies that supply GM with parts, transportation and other services, said Jerry Dias, national president of Unifor.

The number of job losses at the Ontario companies that supply the GM plants in Canada and the United States is not clear, but is expected to total in the thousands as the strike drags on and the economic damage spreads. Ontario’s auto-parts makers employ 100,000 people and export $18-billion worth of components to the United States. GM accounts for as much as one-third of export and domestic sales.

In a phone interview with The Globe and Mail, Mr. Dias said the layoffs, which GM says are temporary, are “just a snapshot of what’s going to happen” when the Oshawa assembly lines shut down in December, part of GM’s move to end production of slower-selling cars.

Mr. Dias said the laid-off Canadian workers sympathize with their striking U.S. counterparts, and support their move to shut down company operations.

“Our people understand what the hell is going on,” he said. “Our members who work at GM and the supply base all feel completely betrayed by GM. The strike is about job security. It’s about our jobs going to Mexico.”

“We actually feel pretty good that we’ve been able to keep half our people up and to keep all of the [Equinox] production going … for the foreseeable future,” David Paterson, a GM spokesman in Canada, said by phone on Monday. “Of course, we would like to see the end of the UAW strike so that we can get up and going as quickly as possible.”

The UAW walked off the job on Sept. 16 after failing to reach a new contract with GM. Talks on Monday failed to yield a deal.

The union is seeking a bigger piece of GM’s profits, better benefits and work for four U.S. plants slated to close. GM said it has offered to spend US$7-billion to keep or create 5,400 jobs.

GM’s Oshawa plant is slated to close by December. GM and Unifor recently agreed to retain part of the shop to make after-market parts when the vehicle assembly lines shut down, a move that keeps the lights on ahead of next year’s Canadian contract negotiations.

Mr. Dias confirmed the union is making plans to fight for a new vehicle at the plant. “It’s not as if you need a huge investment at the plant. As a matter of fact, you don’t,” he said, saying the paint shop is “fairly new” and the flexible or “flex” assembly line can be quickly retooled to make different vehicles.

“And with the Canadian dollar hovering about 75 [US] cents, 76 [US] cents, it’s pretty cheap to make cars in Canada,” Mr. Dias said. 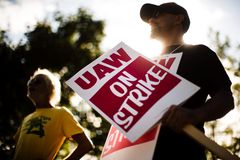 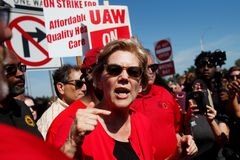 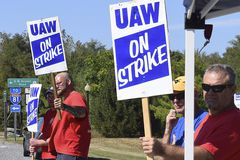