Seven years ago, Tiff Macklem was passed over for the top job at the Bank of Canada in favour of a relatively unknown dark horse choice named Stephen Poloz. Now, he’s stepping out of the shadows of academia to make his surprise comeback.

On Friday, Finance Minister Bill Morneau named the 58-year-old central banking veteran to take over as Bank of Canada governor effective June 3, when Mr. Poloz’s term expires. Mr. Macklem spent parts of the past four decades with the central bank, culminating in a four-year stint as senior deputy governor from 2010 to 2014, serving as right-hand man to Mark Carney.

The announcement ends a four-month search by an independent committee of the central bank’s board to choose a replacement for Mr. Poloz, who announced in December that he wouldn’t seek a second term, and is something of a surprise to those who follow the bank closely.

Who is Tiff Macklem, the new Bank of Canada governor?

Poloz’s successor will work in the pandemic’s shadow

Tiff Macklem knows the Bank of Canada well. He’s already worked there for about 25 years

Carolyn Wilkins, who has served as Mr. Poloz’s highly capable senior deputy for the past six years, had long been considered the favourite to succeed him – and, indeed, had been groomed for the job by Mr. Poloz. Mr. Macklem, by contrast, had been relatively low profile in the competition – even people close to the bank’s senior ranks said it was never entirely clear whether he was pursuing the job.

But Mr. Morneau and Prime Minister Justin Trudeau, who had final say on the board’s recommendations, opted to bring back Mr. Macklem. Ironically, Mr. Macklem had been considered the favourite for the top job seven years ago, only to lose out to Mr. Poloz, then head of Export Development Canada, who had been out of central banking for nearly two decades.

Mr. Macklem remained as senior deputy for less than a year before leaving to become dean of the University of Toronto’s Rotman School of Management, where he has spent the past six years.

The decision to choose someone from outside the central bank’s current management ranks was made at one of the most complicated times for policy-setting in the bank’s 85-year history. The financial and economic strains brought on by the COVID-19 crisis have prompted Mr. Poloz and his colleagues to slash interest rates to the bone and roll out a complex web of market supports over the past two months, resulting in a massive expansion of the bank’s balance sheet and turning it into a large-scale buyer of government bonds for the first time.

Mr. Macklem is considered well-connected in financial, central banking and political circles both in Canada and internationally, having served a variety of roles with the Bank of Canada, international financial committees, the Department of Finance and the private sector over the years.

In addition to his position at Rotman, Mr. Macklem sits on the board of Bank of Nova Scotia – a position he said he will relinquish next week, before rejoining the Bank of Canada. He also earned his crisis-management credentials during the 2008-09 financial crisis, when he was on the front lines as a senior official in the Department of Finance.

In choosing Mr. Macklem over Ms. Wilkins, the government turned down an opportunity to deliver the central bank’s first female governor – which many observers had thought would be a strong consideration for a government that has been vocal about gender equality. Ms. Wilkins has also played a key role in overseeing the implementation of the many market actions the bank has taken over the past two months, putting her front and centre in the work the bank is doing to guide the markets and economy through the crisis.

Reaction in the business and financial communities to Mr. Macklem’s appointment was generally positive. But some critics were disappointed in the decision to bypass the most senior woman, and most qualified female candidate, in the central bank’s history.

“Why is the man always the right choice?” Tanya van Biesen, executive director of women’s leadership advocacy group Catalyst Canada, said in a telephone interview. “Statistically, the math doesn’t add up. If 50 per cent of the population is not a man, then men can’t always be the right choice. We have to force ourselves to ask the question: Why not Carolyn? That doesn’t mean that it shouldn’t be Tiff, but why shouldn’t it be Carolyn?”

Still, the choice was consistent with the recent history of governments looking outside the Bank of Canada for its next leader. Each of the past four choices – Mr. Macklem, Mr. Poloz, Mr. Carney and David Dodge – were working outside the bank when they were asked to take the helm, and each was chosen over a senior deputy who was considered the front-runner.

“The bank only has one governor at a time,” he said. “We’re not going to take any interest-rate decisions today.”

He did indicate his general support for the key elements of the stance that the bank has taken under Mr. Poloz: that supporting market stability and providing liquidity is the bank’s most immediate priority, that negative interest rates are a “disruptive” proposition at a time when financial stability is already shaken, and that the bank was justified in not making firm economic forecasts in its recent monetary policy report, given the risks and the wide-ranging uncertainty in how the COVID-19 recovery plays out.

“The bank has to be humble about what it doesn’t know. There’s a lot we don’t know about this disease,” Mr. Macklem said.

“Clearly there are downside risks. ... It’s going to be very important that the Bank of Canada gets the best economic information it can."

In the near-term, Mr. Macklem and the rest of the central bank’s governing council will have to decide whether current policies are doing enough to support an economy that is in the midst of a record-breaking contraction, said Josh Nye, senior economist at Royal Bank of Canada.

“The bank has already had some success in improving financial market functioning and keeping borrowing costs manageable," he said. "But the longer the crisis drags on, and the greater the borrowing needs of governments, businesses and households, the more the BoC will face pressure to expand its offerings or provide more direct credit support as other central banks have done. Mr. Macklem will also have to ensure policies are in place to support an eventual recovery when coronavirus containment measures are eased.”

With a report from Rita Trichur in Toronto 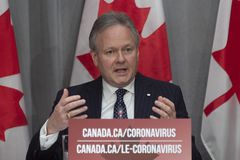