The Bank of Canada opted against an “insurance” rate cut to safeguard the Canadian economy against a slumping world economy, but it warned that Canada looks increasingly at risk of catching the contagion of the deepening global malaise.

“We are not an island. We are not immune to these global developments,” Bank of Canada Governor Stephen Poloz told reporters at a news conference after Wednesday’s release of the Bank of Canada’s interest-rate decision and quarterly outlook report. The bank left its key rate unchanged at 1.75 per cent, where it has stood for the past year, even as the U.S. Federal Reserve and other major central banks have cut their rates.

The bank’s decision to hold steady came just hours before the Federal Reserve announced another quarter-percentage-point cut to its own key rate, its third cut in the past three months, in light of growing concerns about the risks posed by the U.S. trade war with China. Fed chair Jerome Powell said at a news conference that “It would take a material reassessment of our outlook” to prompt the Fed to cut further.

The Fed’s rate is now in a range of 1.5 per cent to 1.75 per cent – moving it below the Bank of Canada for the first time in nearly three years. That leaves Canada with the highest official interest rate among the world’s advanced economies.

Mr. Poloz said that he and the other members of the bank’s Governing Council did consider lowering rates, amid signs that the global troubles are increasingly weighing on Canadian growth.

“We definitely talked about what [a rate cut] would look like,” Mr. Poloz said.

But the Bank of Canada was concerned about the negative consequences that lower rates might have on Canada’s already elevated consumer debt worries.

“There would be costs associated with that,” Mr. Poloz said. “It was a significant piece of the discussion.”

Nevertheless, the bank’s rate announcement and quarterly outlook were downbeat about the prospects for the Canadian economy, especially over the next several months. The bank cut its third-quarter growth estimate to 1.3 per cent annualized – from 1.5 per cent in its previous forecast, in July – and projected the same 1.3-per-cent pace for the fourth quarter.

The bank noted that the global slowdown, fuelled by deep uncertainty over the U.S.-China trade dispute, has been “most pronounced” in business investment and exports – which is where its impact surfaced in the Canadian economy. The bank expects that both of these components of the economy – once expected to be major drivers of the next phase of Canada’s growth – “are likely to contract” in the second half of the year, and will recover only modestly in 2020 and 2021. It added that the global slowdown is weighing on commodity prices, adding further pressure to Canada’s economy.

But the central bank noted that, despite the commodity weakness, the Canadian dollar has remained strong against its U.S. counterpart and “has strengthened against other currencies," as a consequence of the Bank of Canada maintaining stable rates while other central banks have cut.

The Canadian dollar fell immediately after the bank’s decision, to 76 US cents from 76.45 US cents prior to the announcement. It closed the day’s trading at 76 US cents. Bond market pricing also indicated that traders now see a nearly 30-per-cent chance of a quarter-point cut at the Bank of Canada’s next rate-setting decision, in December, up from 13 per cent a day earlier.

“The door was left ajar for a cut down the road,” CIBC chief economist Avery Shenfeld said in a research note. “Their conclusion is that they can stand pat, but will be watching for the potential for contagion from manufacturing and capital spending into other segments of the economy that have been providing support.”

For all of 2019, the bank raised its growth forecast to 1.5 per cent from 1.3 per cent, reflecting a short-lived growth spurt of 3.7 per cent in the second quarter, fuelled by temporary factors. But it trimmed its 2020 and 2021 growth projections to 1.7 per cent and 1.8 per cent, respectively, from the July forecasts of 1.9 per cent and 2 per cent.

The bank also expressed some renewed concerns about household debts, as weak global bond markets drove down market interest rates over the summer and sparked a new wave of mortgage borrowing.

Nevertheless, it believes that the Canadian economy is still operating close to its full potential, particularly outside the energy sector, and that the small output gap that remains will inch closed over the next two years. It added that the labour market remains strong and wage growth is picking up, and that consumer spending and housing show solid strength. For those reasons, the central bank continued to hold its key interest rate steady.

“Governing Council considered whether the downside risks to the Canadian economy were sufficient at this time to warrant a more accommodative monetary policy as a form of insurance against those risks, and we concluded that they were not,” Mr. Poloz said in his prepared opening statement to the news conference.

Still, the worry is that, as the U.S.-China trade uncertainties persist, the damage could eventually spread more widely in the Canadian economy. Mr. Poloz acknowledged that the central bank has become more concerned about the downside risks to the economy the longer the trade worries go unresolved.

“We already can point to significant damage being done to the global economy,” he said. “Sure, if the uncertainty goes away and everything goes back more to normal, then we’d expect to see a bounce – but it will be some time before we would make up the cost that has already been [incurred].”

Bank of Canada ‘ghosting’ ends today. (But don’t expect a kiss. That should come from the Federal Reserve)
Subscriber content
October 30, 2019

Bank of Canada expected to hold line on interest rates again, but how long can it keep diverging from rest of world?
Subscriber content
October 27, 2019 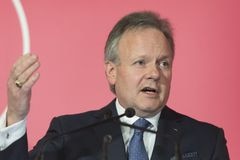