The Bank of Canada will diverge from the U.S. Federal Reserve’s expected policy-easing path and keep interest rates on hold at least through this year, according to economists in a Reuters poll who said that the risk of a recession has risen.

The Fed, the European Central Bank and other major central banks are set to embark on an easing policy in coming months, or already have, to combat sluggish inflation and slowing economic growth exacerbated by global trade tensions.

But the BoC will take a different route and keep its key interest rate on hold at 1.75 per cent through to the end of next year at least, according to the poll of nearly 40 economists taken on July 1-4, supported by recent upbeat domestic activity.

That bias, though, is expected to change next year as growth takes a hit.

Indeed, not only has the probability of a BoC easing for both this year and next risen, there are more economists now who predict at least one rate cut at some point before the end of next year compared with the previous poll in May.

Back then, forecasters were split in three directions about the BoC’s policy path. But now, about 40 per cent with a view to the end of 2020 expect the BoC to cut rates at least once, including two respondents predicting it to happen this quarter.

Only a handful said the central bank will hike rates next year.

“For the Bank of Canada, there is no rush to cut interest rates. At the same time, with the Fed moving relatively aggressively to cut interest rates, the BoC by next year will have to cut at least once in order to prevent the Canadian dollar from appreciating too strongly,” said Benjamin Tal, deputy chief economist at CIBC.

“So the question is how long can you divorce yourself from the Fed if you are the BoC, and I say not for too long.”

That lines up with the view of currency strategists in a separate poll who predict the Canadian dollar will stay firm against the dollar in a year as a recovering domestic economy forestalls BoC interest-rate cuts.

“A deterioration in U.S.-China trade tensions, a broader Chinese ban of Canadian products, a Canadian dollar soaring above 80 U.S. cents coming from the Fed cutting aggressively would then force the BoC to join the easing bias camp,” said Sebastien Lavoie, chief economist at Laurentian Bank.

The poll showed the Canadian economy is forecast to lose momentum considerably, slowing to a growth rate of 1.5 per cent by the end of next year from the 2.2 per cent expected for the previous quarter.

More than 80 per cent of economists responding to an additional question said the risk to that already-modest growth outlook was skewed more to the downside.

While U.S. President Donald Trump provided some temporary relief at the Group of 20 summit, the chances of a recession in Canada have increased with no let-up yet in trade uncertainty.

Trade concerns and sluggish global demand will likely squeeze recent gains in the price of oil – Canada’s key export, according to a separate Reuters poll.

“Canada’s nascent mid-year rebound is expected to be short-lived as lingering domestic challenges, a slowing global and U.S. economy and lower rates in the U.S. may prompt the BoC to cut rates later this year,” said Tony Stillo, director of Canada economics at Oxford Economics.

Canadian dollar stands prouder but watch when Bank of Canada starts ‘rooting for the other team’: CIBC
Subscriber content
July 2, 2019 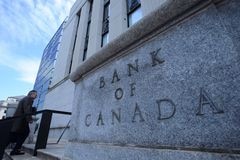