Bank of Canada Governor Tiff Macklem has provided the clearest picture yet on how the central bank plans to reduce monetary stimulus, saying it expects to start raising interest rates before entirely winding down its bond buying program.

In a Thursday speech, Mr. Macklem said the bank is approaching the “reinvestment phase” of its federal government bond purchase program, also known as quantitative easing, or QE. Since the start of the pandemic, the bank has been buying billions of dollars worth of government bonds every week in an attempt to lower yields on benchmark bonds and bring down borrowing costs across the economy.

The reinvestment phase will start after the bank’s next reduction in the pace of bond buying. The bank’s goal in that phase will be to match bond purchases to the pace at which bonds it already owns are maturing – effectively stabilizing the size of the bank’s balance sheet. That will require buying between $4-billion and $5-billion worth of government bonds a month, down from around $2-billion a week, Mr. Macklem said.

Most analysts expect the bank’s next reduction in bond buying will come in October. The speech comes a day after a rate decision where the bank’s governing council opted to leave monetary policy unchanged.

Once the bank stabilizes its asset purchases, it expects to raise interest rates before ending the bond buying program altogether, Mr. Macklem said. This is a crucial point for market participants, who are trying to gauge how long the bank expects to continue buying government bonds.

The bank has kept its key policy interest rate at 0.25 per cent since the start of the pandemic, and promised not to raise the rate until slack in the economy is absorbed. The bank currently estimates this will happen in the second half of 2022.

“Eventually, when we need to reduce the amount of monetary stimulus, you can expect us to begin by raising our policy interest rate. What this all means is it is reasonable to expect that when we reach the reinvestment phase, we will remain there for a period of time, at least until we raise the policy interest rate,” Mr. Macklem said, according to the prepared text of the speech.

The bank launched the QE program in April, 2020, in response to the economic and financial turmoil early in the pandemic. It has trimmed the size of the program three times since last year, making it one of the most aggressive central banks in the world in terms of cutting back emergency stimulus measures. At the height of the program, it was buying $5-billion worth of federal government bonds a week, contributing greatly to the bank’s balance sheet quadrupling in size compared with before the pandemic.

Other central banks have begun to follow the Bank of Canada’s path. On Thursday, European Central Bank president Christine Lagarde said the ECB would move to a “moderately lower pace” for its bond buying program, although she added that this did not amount to “tapering.” U.S. Federal Reserve chair Jerome Powell said in a speech last month that the Fed could begin trimming its pace of bond buying before the end of the year.

“First, tapering should not be considered monetary tightening. Rather, having a stable balance sheet should be viewed as maintaining the monetary stimulus already provided via QE, just not increasing it further,” Mr. Mendes wrote.

“Second, the beginning of the reinvestment phase will not necessarily mean that the central bank has changed its view on how long to keep the policy rate pinned down,” Mr. Mendes wrote.

A key detail of the speech for bond market watchers is that the bank intends to reduce its purchases of government bonds on both the primary and secondary market. The QE program works by buying government bonds owned by private financial institutions – the secondary market. Alongside this, the bank also buys bonds straight from the government, mainly to offset banknote liabilities, not as a form of stimulus.

Alongside new details about the path of monetary policy, Mr. Macklem gave an assessment of the economy in line with the bank’s Wednesday rate announcement. He said he expects the economy to strengthen in the second half of the year, although he warned that rising cases of COVID-19 and disruptions to global supply chains could weigh on the recovery.

The bank’s rate decision on Wednesday was coloured by unexpectedly bad economic growth data published by Statistics Canada last week. Statscan determined the economy shrank by 1.1 per cent on an annualized basis in the second quarter, which was three percentage points below the central bank’s forecast.

“We expect these global supply chain problems will gradually be resolved, but it could take some time,” he said.

On the topic of inflation, which hit a decade-high 3.7 per cent in July, Mr. Macklem said that the recent run-up in prices is largely the result of “transitory” factors. He added that “their persistence and magnitude are uncertain and we will be monitoring them closely.” 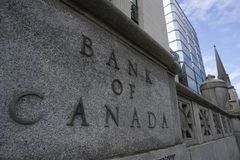