Adding that the company has not yet selected a 5G supplier, chief executive officer George Cope addressed concerns about the Chinese network vendor during a conference call with analysts on Thursday. He said the company is awaiting the results of a federal government cybersecurity review on the use of Huawei equipment.

The consultancy Accenture has estimated that Canadian carriers will spend $26-billion to deploy 5G infrastructure between 2020 and 2026. Huawei has aggressively pursued the Canadian radio equipment market, in part by offering lower prices than its competitors, and analysts say costs could increase if it is no longer an option.

Canada’s second-largest wireless carrier has used Huawei equipment extensively in the radio-access portions of its 3G and LTE (4G or long-term evolution) networks, but Mr. Cope noted BCE has not used the gear in its core network, which carries more sensitive information.

“It’s important to know we’ve made no selection yet of our 5G vendor,” he said. “And if there was a ban, or we chose a different supplier than Huawei for 5G, we’re quite comfortable all those developments would be addressed within our traditional capital intensity envelope and therefore no impact from a capital expenditure program outlook.

“Nor do we think whatever the outcome is would in any way impact our timing in the market for 5G,” Mr. Cope added, seeking to reassure investors the company would not be knocked off course in its plans for next-generation wireless technology that is expected to offer much faster speeds for consumers and open up new lines of business for operators as it supports an expansion in the number of connected devices.

Telus Corp. has also used Huawei equipment in its radio network, and could be affected by restrictions on the company. Several analysts have said they see a ban on 5G equipment from Huawei as increasingly likely, although most do not expect the government to order carriers to remove its existing gear.

In a report on Monday, National Bank analyst Adam Shine wrote that it is difficult to “quantify the impact” of a potential Huawei ban, but said, “some delays can be expected as strategic course corrections take place and new procurement plans are established with Nokia and/or Ericsson,” Huawei’s main competitors. “Some recent spending efforts would have to be replaced and one must acknowledge that Huawei has tended to be the low-cost supplier."

BCE’s capital intensity – the ratio of capital investments compared with revenue – was 16.9 per cent in 2018 and the company said Thursday it expects it to be 16.5 per cent for 2019. BCE spent $3.97-billion on capital expenditures in 2018 and plans to invest slightly less than that this year. If spending on radio equipment increases because purchases must shift to a more expensive vendor, BCE could absorb the impact by spreading those costs over a longer period of time and making cuts elsewhere to avoid a material increase in spending in any given year.

Still, BCE has said it would prefer to keep working with the Chinese supplier if possible. In a November interview with The Globe and Mail, Mr. Cope said Huawei “is an incredible company from a technology perspective and the real benefit of that is Canadians get this great technology. Do we want to deprive Canadians of some of the best worldwide infrastructure?”

Over the past year, the United States has led a global campaign against the use of Huawei equipment, and Canadian intelligence allies Australia and New Zealand have already restricted the company’s gear in 5G. Britain is considering taking similar steps, and carriers in several European countries are also re-evaluating their relationship with the vendor.

At a meeting with The Globe’s editorial board on Thursday, Navdeep Bains, Minister of Innovation, Science and Economic Development, said the review is still under way and the government will not be "rushed into a decision.”

He said he has met with telecom industry representatives to discuss the situation, although he did not name specific companies. “They talk about their business case and explain the technology for 4G and 5G and how interoperable it is and how it works. … They understand that we’re going to take the appropriate time to make a thoughtful and appropriate decision.”

Canada’s largest carrier, Rogers Communications Inc., has used some Huawei equipment in Western Canada, but swapped most of it for Sweden-based Ericsson, the supplier it says it plans to work with on 5G.

Revenue increased by 3 per cent to $6.2-billion, which the company said was owing to growth across all of its businesses; customers spent more on broadband data with BCE’s wireless and home internet services, and even its media division saw an increase in advertising revenue.

BCE said adjusted EBITDA (earnings before interest, taxes, depreciation and amortization) increased by 2.8 per cent to $2.4-billion in the fourth quarter.

But profit fell 8 per cent to $642-million, or 68 cents a share, as the company incurred severance charges related to cutting 700 jobs, and recorded a $190-million non-cash impairment charge at its Bell Media division, saying that was due owing to lower revenue and fewer subscribers at its French-language television stations. On an adjusted basis, BCE earned 89 cents a share, up 8.5 per cent from a year earlier.

The company announced a 5-per-cent increase in its annual dividend to $3.17 per common share, consistent with a long-standing dividend-growth policy.

BCE added 122,000 wireless customers on contracts in the period, below analyst estimates of 149,000. That was also down from 175,000 in the same quarter of 2017, during which Canada’s three national carriers offered deep discounts for a week-long period as they responded to attractive pricing from Shaw Communications Inc.’s Freedom Mobile. BCE said on Thursday it was less aggressive with promotions during the 2018 holiday shopping season.

The company added 21,000 prepaid wireless customers (who pay for the service upfront) in the fourth quarter compared to a loss of 17,000 in the same period a year earlier. Mr. Cope emphasized that swing from negative to positive after the company’s launch of the low-cost Lucky Mobile wireless brand in December, 2017.

BCE also attracted 30,000 new internet subscribers and 36,000 IPTV (internet protocol television) customers in the fourth quarter, both up from the same period a year earlier. It lost 23,000 satellite TV customers. ​

U.S. warns European allies not to use Huawei gear for 5G networks
February 6, 2019 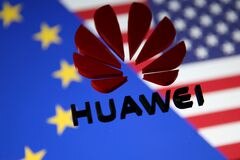 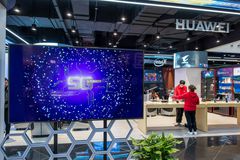