Canada’s biggest telecoms came to the CRTC with a range of proposals to address complaints of misleading and aggressive sales practices while still insisting the majority of customers are not affected by such tactics.

BCE Inc. and Rogers Communications Inc. appeared before the Canadian Radio-television and Telecommunications Commission (CRTC) on Friday at the end of a five-day hearing at the regulator’s Gatineau headquarters. The country’s two largest phone- and internet-service providers were the main subjects of media reports about alleged mistreatment of customers that spurred the federal government to order the CRTC to hold a public inquiry.

They have both emphasized that they have tens of millions of interactions with customers every year and only a few thousand complaints about sales practices. However, according to a public-opinion survey conducted by Ipsos for the CRTC, 40 per cent of respondents said they experienced aggressive or misleading sales practices.

“You say a vast majority of Canadians aren’t complaining,” CRTC chairman Ian Scott told a panel of executives from BCE, but asked how they could square that assertion with the fact that more than 600 customers and more than 30 employees or former employees had complained about BCE during the CRTC proceeding alone.

“We’ve dropped the ball in some instances, so we’ve come forward with proposals we think will … go a long way to rectifying problems,” said BCE’s Robert Malcolmson, senior vice-president of regulatory affairs.

BCE put forth five proposals on Friday: a new regulation to make sure all promotional and product offers are clear; a 30-day buyer’s remorse policy allowing customers to cancel without penalty; a requirement to provide a written confirmation of the terms within 24 hours of a customer signing up for a service; a “do-not-knock” list that would bar any telecom provider from door-to-door sales where people say they do not want to be approached at home; and requiring all service providers to implement whistle-blower policies so employees can safely come forward regarding bad behaviour.

Mr. Scott asked why BCE, apart from its large size, seems to be the biggest “offender.” BCE’s Rizwan Jamal, president of Bell residential services, suggested it was attributable to having a lot of employees. "Making sure they all do the right thing is challenging,” he said, adding that’s why the company is proposing systemic solutions to the problem.

The CRTC chairman also asked the company about the research of University of Ottawa law professor Mary Cavanagh and a group of students who posed as mystery shoppers at wireless retail outlets and found great difficulties in getting clear information on the terms and price before making a purchase decision.

BCE said it has not noticed a problem with that issue in its own customer surveys, but said it would consider its position on providing written presales quotes. Rogers, which appeared earlier in the day, said it is in the midst of rolling out a standard presales quote for all of its products.

David Watt, senior vice-president of regulatory at Rogers, said the company is always trying to improve its relationships with customers. “What we’re trying to get across here is, where mistakes happen it’s not because we’ve intentionally made them."

Mr. Watt argued that the absolute number of formal complaints does not suggest there is a systemic problem that warrants new regulations. However, if the CRTC decides it does need to respond with a new code of conduct to cover retail sales, he said the company wants to provide significant input.

Shaw Communications Inc., which also appeared on Friday, suggested a ban on telecom providers outsourcing door-to-door sales to third parties. Earlier in the week, a public-interest group argued in favour of banning door-to-door sales completely, saying having a sales agent in your home can be one of the most intimidating situations for customers.

Telus Corp., which was before the commission on Thursday, was critical of the methodology used in the Ipsos survey, saying the questions were “modelled in a way to elicit negative answers.” Other telecoms have also complained about the survey. Ipsos surveyed 1,600 people from an online panel representative of the Canadian population and a further 7,000 responded to a call-out from the CRTC.

The commission also heard from smaller telecom providers as well as a number of consumer and public-advocacy groups. Democracy Watch proposed setting up a consumer-funded telecom watchdog.

The CRTC has until the end of February, 2019, to provide a written report on these issues to the federal government. 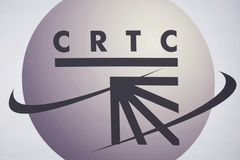