Frank Stronach decided to take his daughter to court over control of a $1.5-billion empire after Belinda Stronach made a take-it-or-leave-it offer to settle a two-year feud that would have seen her take control of the family’s crown jewel, its horse-racing and gambling business, sources say.

Mr. Stronach, the 86-year old founder of auto-parts company Magna International Inc. and life-long horse-racing fan, has been battling with his daughter over leadership of their private company, the Stronach Group (TSG), which owns six prestigious U.S. racetracks, along with a 90,000-acre ranch and golf course in Florida.

Six weeks ago, advisers and friends to both sides said Ms. Stronach, 52, chairwoman and president of the family company, and TSG chief executive Alon Ossip tabled what they called a non-negotiable offer to resolve the dispute. They sought sole ownership of the horse-racing and gambling operations, which posted US$1.1-billion in sales last year. These sources were granted anonymity because the Stronach family has not authorized advisers to discuss a dispute that is now before the court.

Mr. Stronach, who stepped away from the family company in 2013 to run successfully for public office in his native Austria and returned a year later, would have been left with assets that included a ranch that raises grass-fed cattle. The family company has invested more than US$300-million in the Florida project as part of Mr. Stronach’s passion for animal rights and environmentally sustainable food options.

Analysis: A blood feud shatters the bond between Frank Stronach and daughter Belinda

The 73-page filing in the Ontario Superior Court of Justice details an increasingly dysfunctional relationship between Mr. Stronach and his daughter, who has spent most of her adult life working at his businesses and came to control the family company.

The father wanted to put more money into the Florida ranch; the daughter said no, court filings show. Mr. Stronach spent tens of millions of dollars developing a nearby golf course; Ms. Stronach shut it down. The Magna founder and his wife, Elfriede, travelled in a family-owned Dassault Falcon 7X corporate jet, and court documents show their offspring decided in September to sell the US$35-million aircraft, “without any prior notice or consultation.”

In a line that speaks to the split that left Mr. Stronach on one side and his daughter and former trusted adviser Mr. Ossip on the other, the Magna founder said in the court filing: “Belinda and Alon were confrontational, disrespectful and insubordinate.”

The Stronach family is feuding at a time when their horse-racing business is prospering as it successfully grapples with the sport’s aging demographics. In early November, California’s Santa Anita Park, which the Stronachs own, plays host to a three-day electronic-games tournament. A generation that has never heard of Seabiscuit will flock to a track that features a statue of the stallion and play games such as Dota 2, Hearthstone and Starcraft II in the U.S. finals of a tournament known as the World Electronic Sports Games.

“The Stronach Group has been performing very well in a number of its core businesses, including our largest business, racing [and] gaming, which has seen revenue increase from US$600-million in 2013 to over US$1.1-billion in 2017,” TSG vice-president Tiffani Steers said in an e-mail.

“While we regret the tension that exists within the Stronach family, it remains business as usual for [the] Stronach Group,” Ms. Steers said. “We will continue to exercise professionalism, diligence and care in the management of TSG’s businesses as we work to support the needs of stakeholders across our operations.”

The Stronach Group also owns established racetracks such as Pimlico Race Course in Maryland and Gulfstream Park Racing in Florida, which a friend and two advisers of Ms. Stronach said became a source of family tension after Mr. Stronach spent US$50-million decorating the site with an 11-storey statue of the winged horse Pegasus defeating a dragon.

The family company owns breeding stables and facilities in Ontario and Florida that rehabilitate thoroughbreds when their racing days are over. TSG also runs three media and gambling businesses rooted in horse racing, including a service called Monarch Content Management LLC that broadcasts races to outlets around the world, including casinos, off-track betting facilities and internet gambling companies.

Mr. Stronach alleges the family company faced financial difficulties in 2016 after his daughter and Mr. Ossip “seriously neglected the business of The Stronach Group and abused their positions of authority. They did so in order to conceal significant cash-flow issues, and to favour their own personal interests."

The friend and the two advisers of Ms. Stronach said any cash-flow issues came as Mr. Stronach put increasing amounts of money into the Florida properties, and his daughter tried to slow down the spending and avoid selling assets to fund her father’s projects. 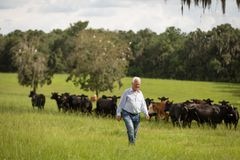 Analysis
All in the billionaire family: A blood feud shatters the bond between Frank Stronach and daughter Belinda
Subscriber content
October 12, 2018 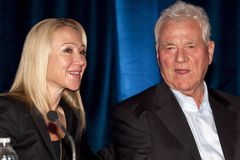 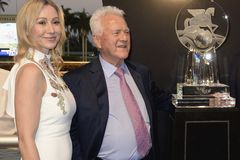