Braslyn Ltd., an affiliate of Joe Lewis’s Tavistock Group, floated a non-binding proposal of $5.20 a share in April, 2018. But the finances at Callidus, a Toronto-based alternative credit provider, deteriorated to the point where the parties settled on 75 cents last month, according to a draft copy of the deal circular obtained by The Globe and Mail.

Braslyn’s bid, at a fraction of Callidus’s initial public offering price five years ago, followed a torturous, nearly three-year process to privatize the company, whose controlling shareholder is Catalyst Capital Group Inc. with a 73-per-cent stake. The documents show the protracted effort by Catalyst founder Newton Glassman and others to find a buyer or other solution that would remove Callidus from the stock market as the company began to report heavy losses.

That process, assisted by Goldman Sachs, brought in 17 potential suitors to examine its proprietary financial data. None tabled a formal bid, although one unnamed party considered bidding $12 to $17 in 2017 before backing away.

Proposals from Braslyn, which has a 14.5-per-cent interest in Callidus, fell in value over successive iterations, according to the background detailed in the circular. It made its formal offer for the minority position in August, 2019, and Callidus’s special board committee has urged shareholders to accept it. The bid followed another proposal from Braslyn last December, valued at $2 a share.

After that proposal, the special committee told Braslyn it was concerned that the minority shareholders would not approve it, given the much higher valuations that Callidus executives had previously provided.

The committee has warned that investors risk being left holding shares with no value because of the company’s high debt obligations and worsening financial position if they reject the offer. They are due to vote on the transaction in October.

Mr. Lewis is the owner of British soccer’s Tottenham Hotspur as well as one of the world’s most valuable private art collections.

Catalyst, led by Mr. Glassman, said it would not grant extensions to loans it has made to Callidus beyond September, 2020, if the Braslyn deal is not completed. Callidus owes $421-million to Catalyst.

The draft circular was included in an affidavit by David Sutin, chairman of the special committee of Callidus’s board, as part of the legal process for the plan of arrangement.​ The official circular will be filed with regulators shortly.

It details how Callidus struggled to drum up interest in a deal to acquire the minority while it generated red ink through several quarters, as loan losses piled up and companies it acquired struggled.

“This decline in operating and financial performance was a significant factor in the inability of Callidus to negotiate a privatization proposal with any third-party other than Braslyn, which was in a unique position as an existing shareholder with a significant investment in the shares,” Mr. Sutin said in his affidavit.

He also cited a host of senior personnel changes, including medical leave taken by Mr. Glassman in 2018 due to back problems, and the sudden departure of his interim replacement, Patrick Dalton, in March. The company has yet to name a full-time CEO. In addition, chief credit officer James Rogers left in April.

Dan Gagnier, a spokesman for Catalyst, said the company had no comment on the contents of the affidavit.

Callidus executives have also said the company’s performance was hampered by short-sellers and their alleged allies that orchestrated and publicized whistleblower complaints to securities regulators in 2017. The matter is the subject of a long-running lawsuit, launched by Callidus and Catalyst. Many of the defendants have denied the allegations and one, West Face Capital, has countersued. The case has yet to be heard in court.

Catalyst’s funds are heavily invested in Callidus, providing both debt financing and guarantees. This year, Catalyst extended a US$250-million bridge loan to Callidus, among other assistance. Early this year, Mr. Glassman told Braslyn and the special committee that Catalyst would not top up the bid for the minority shares, according to the document.

Besides the financial problems, a potential snag for Braslyn as it worked through its bid over the past year was Callidus’s subsidiary Bluberi Gaming, the maker of casino games, according to the draft circular. During the lengthy negotiations, Braslyn said it did not want to deal with the corporate disclosure requirements that accompanied Bluberi’s obligations when it applied for gambling licences in various jurisdictions.

The problem was resolved earlier this year: Callidus sold Bluberi to Catalyst, and in return Catalyst forgave $92.5-million of debt.

As part of the deal, Braslyn is entitled to 15 per cent of the proceeds of any asset sales Callidus makes in the year after the transaction is completed. Braslyn’s bid requires the approval of a majority of the minority shareholders at the upcoming meeting, as well as court approval. It would get a break fee of $2-million in certain circumstances if the deal does not close.

Callidus shares closed at 73 cents on the Toronto Stock Exchange on Friday. 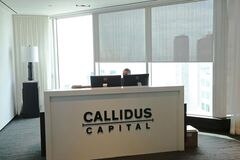