Some of Canada’s largest banks are facing higher tax bills if U.S. President Joe Biden’s administration raises corporate tax rates, but analysts say any hit to earnings could be offset by other economic tailwinds.

All things being equal, increasing the federal corporate tax rate in the United States to 28 per cent from 21 per cent, as Mr. Biden has proposed, would knock an average of about 2 per cent off Canadian banks’ earnings per share in 2022, according to CIBC World Markets Inc. analyst Paul Holden.

The greatest impact would be to Toronto-Dominion Bank , which earns nearly a third of its profit in the U.S. and could see earnings per share decrease by 2.7 per cent next fiscal year, Mr. Holden said in a note to clients. Earnings per share at Bank of Montreal , which makes about 27 per cent of its profit in the U.S., could decline by 2.5 per cent.

Among Canadian lenders, Bank of Nova Scotia has the least at risk because of its smaller presence in the U.S., with just 1 per cent of earnings per share to lose.

But Mr. Holden cautioned that those calculations assume a simple increase of seven percentage points in the effective tax rate for each bank. The U.S. tax code’s complexity makes the precise impact after offsetting factors hard to predict. And the tax increase is intended to help pay for a US$2-trillion infrastructure program that could spur major economic activity and provide a shot in the arm for revenue at all U.S. banks.

“We can envision a scenario where stimulus results in higher interest with the potential to more than offset higher corporate taxes,” Mr. Holden said.

Canada’s banks have already enjoyed the benefit of lower taxes producing higher profits since 2017, when the previous administration led by Donald Trump slashed the U.S. federal corporate tax rate to 21 per cent from 35 per cent. The changes proposed by Mr. Biden would only partially reverse those cuts.

“The devil’s in the details,” said Bharat Masrani, TD’s chief executive officer, in an interview last week. “We adjust our model, we adapt, that’s what we do for a living.”

The effect of higher corporate taxes could be more pronounced for top U.S. banks, which could see earnings per share fall by as much as 9 per cent next year, according to RBC Dominion Securities Inc. analyst Gerard Cassidy.

But he also pointed out that some banks might reap one-time benefits from deferred tax assets on their balance sheets – a form of deduction credit that can be carried forward and set against future taxes.

In early 2018, Canadian banks took one-time charges in their fiscal first quarter as a lower tax rate prompted them to write down the value of deferred tax assets. At the time, TD and BMO took writedowns of about $400-million each, and Royal Bank of Canada took a $150-million charge.

As tax rates rise again, it is possible some banks could benefit from “a proportional write-up in the value of these assets,” Mr. Cassidy said.

“While the higher corporate tax rates will likely reduce the proﬁtability of the banks, underlying fundamental growth supported by an expanding economy and a steeper yield curve will more than oﬀset the drag from higher taxes, in our view,” he said. 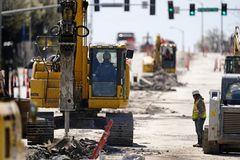 Opinion
Biden is taking the U.S. on its sharpest left turn in 90 years
Subscriber content
February 9, 2021 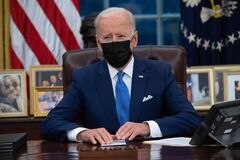