BlackBerry chief executive officer John Chen has been working to find additional sources of revenue as investors express concern over growth rates at the company’s core security-focused software business. That has sent the company hunting through its library of wireless tech and messaging patents to find opportunities for more licensing deals, and lawsuits.

The complaint accuses Snap of infringing six patents issued in 2012 and 2014. Two of those are among the seven BlackBerry patents that were in the suit against Facebook filed March 6. 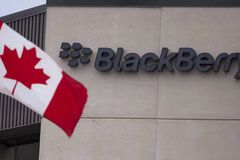