Canada’s biggest patent holder, BlackBerry Ltd., is looking to unload most of its intellectual property in a deal that could mark another turning point for the fallen former smartphone giant.

But it could also deal a major setback to Ottawa’s innovation strategy efforts, marking the second time in a decade that valuable IP assets from one of Canada’s leading research-and-development-driven companies have been sold off. If, as expected, a deal results in ownership of tens of thousands of BlackBerry patents passing into foreign hands, assets potentially worth hundreds of millions of dollars whose creation were partially subsidized by federal research and development tax credits could leave the country along with prospects of generating any further benefit to the economy.

The Globe and Mail has confirmed a report last week by IP industry journal IAM that BlackBerry recently began shopping the majority of its 38,000 patents to interested parties. Tech+IP Capital, LLC, a U.S. investment banking firm, is handling the sale for BlackBerry.

A source familiar with the situation told The Globe the company isn’t certain what price it will get, but it’s believed the portfolio could be worth more than US$450-million - a significant size for a deal in the global patent trade, but a fraction of the US$4.5-billion a consortium led by Apple Inc. Apple Inc. paid in 2011 for a trove of 6,000 Nortel Networks patents. The Globe is not identifying the source as they are not authorized to speak publicly on the matter.

A BlackBerry spokesman declined comment, saying the Waterloo, Ont. company “does not comment on rumour or speculation.”

The patents up for sale include IP in areas where BlackBerry was a trailblazer but is no longer a player, such as mobile instant messaging and social collaboration tools. The company has several thousand more patents it is expected to keep because they underlie its current businesses, which include cybersecurity and building computer operating systems for cars,

CEO John Chen, who has been trying to turn BlackBerry around since he was appointed in November, 2013, has been managing the exit of the company from the smartphone business, cutting costs and shifting into new software businesses. But the company’s share price has been volatile, and sits at US$5.29 on the New York Stock Exchange after hitting a high of more than double that in early 2018.

One consistent bright spot has been the company’s ability to generate revenues and profits from its patents by pursuing licensing deals with other firms, typically by negotiating with companies it maintained were using its IP, or by suing companies such as Facebook, Twitter and Snap it said owed the company for the privilege.

BlackBerry’s patent portfolio is “large, diverse and deep, meaning that in the hands of a savvy owner, it is extremely valuable,” said Waterloo-based IP lawyer Jim Hinton.

BlackBerry has generated a bounty of revenues and profits in recent years from its patents by pursuing licensing deals with other firms – typically by negotiating with companies it maintained were using its IP, or by suing companies such as Facebook, Twitter and Snap it said owed the company for the privilege.

BlackBerry generated US$328-million in “licensing and other” revenue last year – over 31 per cent of total sales – and US$1.1-billion over the past five years. The licensing business has remained one of the few bright spots for the business during the COVID-19 pandemic, although the inconsistency and unpredictability of licensing deals mean the business isn’t fully valued by public shareholders.

"Licensing and other” revenue in the company’s second quarter ended Aug. 31 amounted to US$108-million – 42 per cent of BlackBerry’s total and well ahead of expectations – and helped it deliver a stronger-than-expected profit of US11 cents a share. Licensing revenues are expected to surpass US$250-million this fiscal year.

A sale of most BlackBerry patents would result in “a sharp change of business direction because they’ve been quite successful licensing their portfolio,” said Louis Carbonneau, CEO with Tangible IP, a Seattle patent brokerage and strategic advisory firm.

But "it’s bad news either way” for Canada, he said, because the patents reside here and the government has subsidized BlackBerry’s research and development over the years.

“You’ve got 40,000 patents that basically will be owned most likely by a non-Canadian company,” probably a financial firm that specializes in amassing patents and pursuing licensing deals, said Mr. Carbonneau, a Canadian who has pushed Ottawa to attach strings to IP developed with taxpayer money so that some benefits remain here even after a sale.

Other industry experts said a sale of BlackBerry’s patents would deal a blow to the country’s standing at a time when the government has been making initial steps to improve Canada’s poor reputation for commercializing ideas. BlackBerry is one of Canada’s top 20 spenders on research and development and was number one a decade ago.

“The sale of a massive BlackBerry patent portfolio would knock Canada down further in the global patent ownership rankings," said Natalie Raffoul, an Ottawa-based patent lawyer who noted BlackBerry is the sole Canadian firm among the world’s top 100 patent holders. "Given the economic value of IP and data assets today, Canadian government leaders and policy makers need to perk up to this reality that we continue to lose ground on owning these valuable assets. "

Mr. Hinton called BlackBerry “the lone Canadian standout in the global arms race for IP accumulation” even after it stopped making smartphones. A patent sale would leave Canada “holding no significant position in a global patent market that represents the most valuable assets today. I question whether the government should step in to ensure that critical [publicly funded] IP assets aren’t being offshored for economic and national security reasons.”

John Power, a spokesman for Innovation, Science and Industry Minister Navdeep Bains said, “We are unable to comment on speculation involving commercial transactions.” But Mr. Power added that, “when we look to the world stage to learn from other successful innovation nations, it is clear that no innovation plan is complete without clear support for and understanding of the strategic use of intellectual property.”

Opinion
Contra Guys: Why we think BlackBerry is ripe for a long-awaited rebound
Subscriber content
October 27, 2020 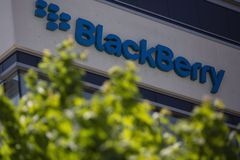 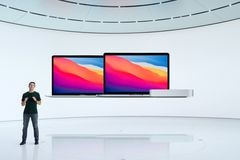 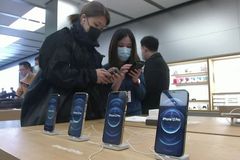