BlackRock Inc. is calling for leaders of companies in its massive portfolio to disclose how their businesses will fare in a “net-zero” carbon economy as the world’s largest fund manager accelerates its push to align investments with the fight against climate change.

BlackRock chief executive officer Larry Fink said in his annual letter to CEOs that the COVID-19 pandemic has only intensified the reallocation of capital to investments with lower climate risk. The shift in assets has gathered momentum as countries made new pledges to get to net zero – when greenhouse gas emissions are simultaneously reduced and offset – as they plotted economic recovery.

Canada is among countries that have set a target to retool its economy to achieve net zero by 2050, and the government of Prime Minister Justin Trudeau has said it is setting the stage for a “green recovery.”

From January to November last year, investors around the world plowed US$288-billion into mutual funds and exchange-traded funds with sustainable assets, nearly double the the tally of 2019, Mr. Fink said.

“Given how central the energy transition will be to every company’s growth prospects, we are asking companies to disclose a plan for how their business model will be compatible with a net zero economy – that is, one where global warming is limited to well below 2 degrees Celsius, consistent with a global aspiration of net-zero greenhouse gas emissions by 2050,” Mr. Fink wrote in his letter to CEOs.

“We are asking you to disclose how this plan is incorporated into your long-term strategy and reviewed by your board of directors.”

Mr. Fink’s comments show New York-based BlackRock, which manages US$8.7-trillion in assets on behalf of pension funds, sovereign wealth funds and other clients, building quickly on its market-moving pronouncements of a year ago. Mr. Fink made headlines by saying BlackRock would part ways with companies that generate more than 25 per cent of their sales from thermal coal, and set up new exchange-traded funds that filter out fossil fuel investments.

It was seen as a wake-up call for the corporate world, and several other major investors have since made similar pronouncements. On Tuesday, Mr. Fink described the change in investor preference for more sustainable opportunities as a “tectonic shift.”

In a video panel discussion on Tuesday during the World Economic Forum that included Chrystia Freeland, Canada’s Deputy Prime Minister, he described the move to sustainable investing as a “huge” economic opportunity. “Let’s be clear – let’s focus on society’s acceptance to create new jobs, to create new technologies, to move forward. We’re going to need US$50-trillion of investing to get to net-zero world,” he said.

As a big driver of the transition, the United States has committed to rejoining the Paris Agreement as part of new President Joe Biden’s environmental agenda. In initial moves, Mr. Biden has cancelled the permit for the Keystone XL oil pipeline from Alberta and slapped a moratorium on new drilling approvals for U.S. lands and waters.

Governments in the European Union, China, Japan, and South Korea have pledged to achieve net-zero emissions. However, facing pushback from some industries and member countries, the EU has been forced back to the drawing board in an effort to create a formal list of industrial activities it considers sustainable. The so-called taxonomy was aimed at providing clarity for investors.

Last year, BlackRock asked all companies in its portfolio to disclose information about climate-change risk and social and governance issues in step with guidelines established by the Sustainability Accounting Standards Board and the Task Force on Climate-related Financial Disclosures (TCFD).

Mr. Fink said he is urging all companies to begin disclosing climate data in line with the TCFD standard before regulators begin to mandate such reporting. Last week, an Ontario government task force recommended the Ontario Securities Commission require companies to adopt such disclosure.

In its active investing portfolios, BlackRock is adopting a “heightened scrutiny model,” applying its risk-management tools to identify particularly high climate risk among companies because of high carbon intensity and insufficient preparation for the energy transition.

“Where we do not see progress in this area, and in particular where we see a lack of alignment combined with a lack of engagement, we will not only use our vote against management for our index portfolio-held shares, we will also flag these holdings for potential exit in our discretionary active portfolios because we believe they would present a risk to our clients’ returns,” Mr. Fink wrote in a separate letter to clients. 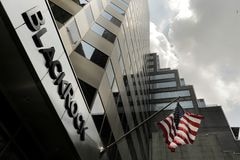 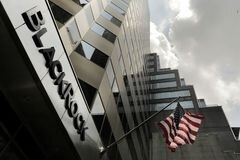 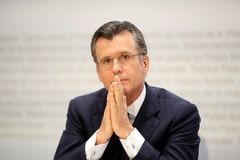