Toronto-based Boat Rocker, which produces television shows such as Orphan Black and MasterChef Canada, was scheduled to price its shares on Tuesday at between $12 and $14 each, ahead of a listing on the Toronto Stock Exchange.

However, investor demand for the offering was tepid, according to investment bankers familiar with the transaction. They said Boat Rocker’s executives and backers are now reviewing their options include cutting the price or size of the offering, or postponing the IPO. The Globe and Mail is not naming the sources because they are not authorized to speak for the company.

“The IPO process for Boat Rocker Media is still under way and [management] continue to have discussions with prospective investors as they work to finalize a potential transaction,” a spokesperson for the company said Thursday. RBC Dominion Securities Inc. and TD Securities Inc. are the lead underwriters on the IPO.

Boat Rocker wants to raise money to pay down $90-million in debt and fund new productions. The company is majority owned by asset manager and insurer Fairfax Financial Holdings Ltd.

Co-founders David Fortier and Ivan Schneeberg – who launched Boat Rocker 18 years ago from studios built in a former carpet factory – and chief executive John Young are also significant shareholders who plan to sell a portion of their holdings as part of the IPO.

Boat Rocker was looking to come to market after shares in a handful of Canadian tech companies soared following IPOs, but a number of other companies downsized offerings, or saw their share prices fall after public debuts. “The upbeat tone to the IPO market you saw early this year is now gone,” said one banker working on the Boat Rocker transaction. “Investors are questioning where we are heading from here.”

CPE Analytics, a company that tracks IPOs, noted a divergence from markets south of the border. “While the U.S. initial public offering and special purpose acquisition corporation (SPAC) market experienced an unprecedented boom in 2020, the Canadian IPO market continued to struggle with mixed results,” CPE said in a report.

For example, in February, private-equity fund Cerberus Capital Management LP cut the size of a planned IPO from auto parts maker ABC Technologies Holdings Inc. by 60 per cent and priced the shares at $10, well below the original range of between $12 and $15 a share.

Shares in Toronto-based ABC Technologies now trade below the IPO price, closing on Thursday at $9.33 on the TSX. Vancouver-based digital-media platform BBTV Holdings Inc. went public in October at $16 a share and ended trading Thursday at $10.45.

High flying Canadian IPOs include agriculture technology company Farmers Edge Inc., which is also backed by Fairfax Financial. The Winnipeg-based company’s stock price jumped by 14 per cent after going public at $17 a share. And Telus International (Cda) Inc. went public at US$25 in early February in one of Canada’s largest IPOs, raising US$925-million, and closed Thursday at US$27.75 on the New York Stock Exchange and $35.25 on the TSX.

Boat Rocker dramatically increased its revenues over the past three years, according to regulatory filings, but the company lost money over the past two years and its earnings before interest, taxes, depreciation and amortization (EBITDA) declined. Revenue through the first nine months of 2020 were $171-million. 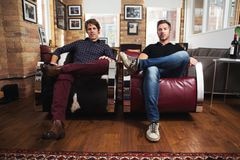