The head of Boeing Co. says the 737 Max passenger planes could be cleared to resume flying before the end of the year, but that timeline is jeopardized by disagreements among the world’s regulators over approvals to the model that was grounded after two crashes that killed 346 people.

Boeing is testing final versions of the software that operates the 737 Max and is working with the U.S. Federal Aviation Administration and other global aviation regulators that banned the plane after crashes in Indonesia and Ethiopia linked to the automated control system’s response to malfunctioning sensors.

“We are still targeting early fourth quarter for our return to service for the 737 Max," Boeing chief executive Dennis Muilenburg said at an investors conference in Laguna Beach, Calif., on Wednesday. "The principal schedule risk on that continues to be regulator alignment around the world and regulator approval.”

Air Canada, WestJet and many other airlines that operated the 737 Max have scrapped routes and cancelled thousands of flights after the grounding of the plane. Both major Canadian carriers have dropped it from their schedules until early January, and are waiting for Transport Canada to approve changes Boeing has made to the 737 Max.

Transport Canada, the European Aviation Safety Agency and Brazil’s National Civil Aviation Agency are part of the certification management team assembled by the FAA to examine the plane’s software changes and training materials, after final submission by Boeing, before allowing the plane to resume flying. Europe’s aviation authority said it will conduct its own test flights of the plane, raising the prospect regulators will not simply follow the traditional approach of accepting the FAA’s certification of the plane.

“It’s fair to say that different regulators have different sets of questions and concerns, and we’re working our way through that,” Mr. Muilenburg said, adding, “I think a phased ungrounding of the airplane among regulators around the world is a possibility.”

A Transport Canada spokesman said the government is collaborating with other agencies to reach “a global solution and harmonized approach to return to service."

"Transport Canada will not lift the current flight restriction of the Boeing 737 MAX until it is fully satisfied that all concerns have been addressed by the manufacturer and the U.S Federal Aviation Administration, and adequate flight crew procedures and training are in place,” Alexandre Desjardins said.

The global fleet of 737 Max planes has been grounded worldwide since March, after two fatal crashes in five months killed 346 people.

In both crashes – in Indonesia and Ethiopia – investigators found that the planes’ automatic stabilization system, known as MCAS, responded to erroneous data from angle-of-attack sensors in the planes’ noses.

The crews repeatedly tried to counteract the dives caused by the software, eventually losing the battles and crashing.

Final reports on the crashes are not out yet.

Boeing has slashed production of the plane to 42 a month from 52, but aims to increase that number to 57 after the ban is lifted. There are 4,400 737 Max planes on order.

The bestselling 737 Max, first delivered in 2017, is an updated model of a plane that first flew in the 1960s. The Max has a longer range and uses less fuel than older 737s. For these reasons, Canadian airlines renewing their fleets are among the bigger buyers of the planes.

Air Canada has 24 Max jets and another 37 on order. WestJet has 13 Max planes and 44 on order. Sunwing Vacations Inc. operated four.

Both major Canadian airlines suspended their financial guidance for 2019 after the groundings, borne higher costs and foregone revenue as a result, though neither has put a precise number to the financial impact. The tighter seat capacity has allowed the airlines to raise prices and stay profitable. Air Canada declined comment on Wednesday. 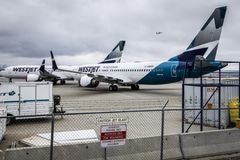 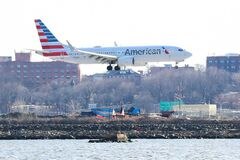