Bombardier Inc.’s chief executive has broken his silence on allegations that the company’s employees were involved in bribery and other wrongdoing, saying that he is tackling the matter “head on” and there is no deep-seated ethics issue at the plane and train maker.

“Honestly, we don’t have a systemic issue here,” Alain Bellemare said in an interview with The Globe and Mail at the company’s Montreal headquarters, adding that the allegations have affected the company’s business “very little” since they first surfaced in 2016.

“In the end, we talk to customers all the time and they see how we do deals and they understand how we work,” Mr. Bellemare said. “We work in a very ethical manner with the highest ethical standards, okay. So for me, this is fundamental.”

His comments mark the first time Bombardier’s top executive has addressed in any significant way the allegations of impropriety since he took the helm in 2015. Though he declined to discuss specific cases, he emphasized the seriousness with which he is taking the claims as he tries to rebuild the company’s profit and credibility with the public. Mr. Bellemare has mandated Bombardier staff to look into the claims and he’s hired outside expertise to bolster that work.

“We are not trying to brush things off. We are tackling allegations smack on, head on,” the CEO said. “We’re making sure that things have been done properly. .... If we haven’t followed the process properly, then we take actions.”

Among the alleged ethical problems involving Bombardier, prosecutors in Sweden continue to pursue a corruption case against a former sales manager and several other associates working for the company’s train business in Europe. Evgeny Pavlov, who was acquitted of bribery after a trial last year, faces a new trial in 2019, though he has reportedly emigrated back to Russia.

Swedish authorities allege that Mr. Pavlov and several other Bombardier managers bribed an official in Azerbaijan to win a US$340-million train contract to supply the former Soviet republic with signalling equipment for a 500-kilometre track along a corridor connecting Asia and Europe. Bombardier is alleged to have moved millions of dollars to unidentified Azerbaijani officials through a company registered in the United Kingdom, according to an investigation last year by the Organized Crime and Corruption Reporting Project, an investigative reporting network.

The U.K. company, Multiserv Overseas Ltd., was the subject of a major Globe investigation in 2016 that found the company – which import records show was involved in more than 125 Bombardier transactions into Russia – to be a middleman with no apparent business purpose. The company has a London mailing address, a director living in Cyprus and a changing ownership structure involving other shell companies in the Seychelles, Panama and Belize.

Mr. Bellemare said “there may be potential issues here or maybe not” in the two or three cases that have come to light to date, but would not speak about the specific investigations. “I don’t want to speculate.” He said Bombardier is looking into the allegations internally and has also hired external professionals “to make sure that we dig deep and we don’t leave any stone unturned. And that’s a big deal.”

Bombardier has denied any allegations that it acted improperly. It announced last summer that it would do its own internal review of how it operates in Russia and the former Soviet Union.

Separate investigations are underway in South Africa, where Transnet, the country’s freight monopoly, hired an outside law firm to look into allegations of corruption and waste in a controversial US$5-billion project to supply locomotives. The 2014 deal was the biggest such contract in South African history. The project was divided between Bombardier, General Electric, China North Rail and China South Rail.

The law firm found that Transnet made “vast and peculiar” payments to Bombardier for locomotives that had not been delivered. The advance payments, later questioned by Transnet auditors, were cited by the law firm as examples of apparent “impropriety” and illegality in the locomotive contract. Bombardier has said it believes the law firm’s report does not suggest any wrongdoing by the company. It said it is prepared to help with any formal probe into the project and stands behind the integrity of its work.

At the time of the locomotive deal, Transnet executives had a close relationship with the Gupta brothers, who were business partners of the son of then-president Jacob Zuma and allegedly sought bribes from the bidders in South African rail contracts.

With reports from Mark MacKinnon and Geoffrey York

Bombardier stands to benefit from Chinese tariffs on U.S.
July 6, 2018 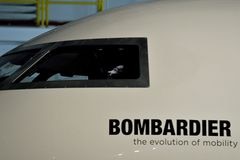