Bombardier Inc. is squeezing new life out of its aging regional jets in a product-development move that suggests its time as a maker of commercial passenger aircraft isn’t quite over yet.

The Montreal-based manufacturer on Wednesday unveiled a new 50-seater regional jet dubbed the CRJ550, a version of its larger CRJ700 with a reconfigured interior that can accommodate three service classes. The fuselage is the same but the plane has been modified with fewer seats, allowing for extra legroom, more on-board storage for carry-on bags and a self-serve snack bar.

United Continental Holdings Inc. will be the launch customer for the CRJ550, Bombardier said. The U.S. carrier is using the airliner as part of a wider push to attract lucrative business travellers, many of whom have complained for years that the smallest regional aircraft don’t offer the same comfort as wide-body planes.

Remodelling the CRJ highlights an effort by Bombardier chief executive Alain Bellemare to repurpose the aircraft in order to increase their appeal to new and existing customers without spending money on a costly clean-sheet redesign. After handing control of its C Series program to Airbus SE and selling its turboprop business to Canada’s Viking Air Ltd., the CRJ family is Bombardier’s last remaining line of commercial airplanes.

“What is old is new again,” said Addison Schonland with AirInsight, a boutique aerospace consultancy. “It brings a lot of interest back to the CRJ because [Bombardier has] a solution which has a launch customer. And we know that airlines are lemmings. If the one guy does it, then the other guys all have to monitor or match that same product.”

The CRJ550 is a boost for the broader CRJ program, proving that Bombardier can still do innovative things with an aircraft many people had written off as outdated, Mr. Schonland said. Winning backing from United, a long-time customer of Bombardier rival Embraer SA, is also positive for the Canadian manufacturer, he said.

Celebrated as the planes that launched Canada into commercial aircraft manufacturing in the 1990s, the CRJ aircraft have been largely neglected in recent years as Bombardier concentrated resources to bring its flagship C Series airliner to market. The plane maker has won firm orders for more than 1,900 CRJ aircraft, but sales have slowed in recent years and the company loses money on each unit it builds.

Mr. Bellemare is now trying to reverse the tide, launching a fresh attempt to boost CRJ sales volumes while lowering manufacturing costs. At the same time, his team is exploring strategic options for the business.

Bombardier’s CRJ order book received a boost last summer after Delta Air Lines Inc. said it would order 20 CRJ900 models in a deal valued at US$961-million before discounts. It got another shot in the arm Wednesday with confirmation that Canada’s Chorus Aviation finalized a purchase agreement to buy nine CRJ900 planes, to be flown under the Air Canada Express banner.

“Both [of Wednesday’s] announcements are positive for the CRJ program and demonstrate management’s focus on creating value for the program while minimizing future capital investments,” Desjardins analyst Benoit Poirier said in a note. The European Commission’s decision to block a planned tie-up between train makers Alstom and Siemens is also positive for Bombardier because a merger would have put its rail unit “at a disadvantage given its smaller size,” he said.

Bombardier recently began offering a modernized cabin for the CRJ aircraft called Atmosphère that includes bigger overhead bins and windows. The basic design of the jets hasn’t changed since the first CRJ100 entered service in 1992. 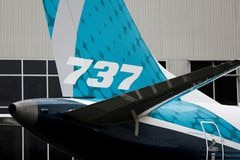 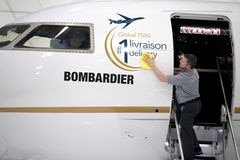