Bombardier Inc.'s US$1.2-billion deal to sell its plane parts manufacturing business to Spirit AeroSystems Holdings Inc. and exit commercial aviation is going through, but cash proceeds to the Canadian plane maker will be lower than originally planned.

All closing conditions have been met and the agreement will close Friday Oct. 30, Montreal-based Bombardier said in a statement Monday. The total value of the deal remains the same as previously announced, but under amended terms Spirit will assume a greater portion of liabilities while paying less outright, the company said.

Cash proceeds to Bombardier will be US$275-million, down from initial consideration of US$500-million, Bombardier said. Spirit will assume liabilities, including government refundable advances and pension obligations worth US$824-million, in addition to other unspecified adjustments in favour of Bombardier, the company said.

This is the second time in two months that Bombardier has accepted new terms for an asset sale that offers it less cash. In mid-September, the company announced a definitive deal to sell its rail unit to France’s Alstom SA for €7.15-billion (US$8.4-billion) including debt. That price is roughly US$300-million less than the original deal but it is offset by a more favourable exchange rate between European and U.S. currencies.

There was considerable doubt the Spirit deal would get done, at least under the terms outlined originally. Spirit contributed to the uncertainty this month when it walked away from a separate agreement to buy Belgium’s Asco Industries. Many investors expected Spirit to abandon the Bombardier transaction, too.

The deal with Spirit is one of two remaining asset sales that Bombardier chief executive officer Éric Martel is attempting to close out as the Montreal company tries to reinvent itself as solely a maker of luxury private jets. The more important transaction is the train business sale, which has already won the approval of European and U.S. regulators and is scheduled for a vote later this week by Alstom shareholders.

Bombardier shares climbed 3 per cent to close at 33 cents Monday on the Toronto Stock Exchange.

“[This] will clear the deck to allow them to focus on their business jets,” said Dan Fong, an analyst who follows Bombardier for Veritas Investment Research. “Despite the lower price, Bombardier still receives a fair amount of cash to help liquidity. They get to unload a non-core operation (one with a challenged near-term outlook no less, and likely more of a distraction than anything else), and Spirit absorbs all the related liabilities. I don’t think this point should be understated.”

Bombardier and Spirit struck a definitive agreement last October for Spirit to buy Bombardier’s Short Brothers aircraft parts plant in Belfast, Northern Ireland, as well as Bombardier’s parts-making business in Morocco and a maintenance and repair business in Dallas. They are Bombardier’s last significant assets in commercial aerospace.

Since the deal was announced, the coronavirus crisis has turned aviation on its head as border closings limit flights and travellers stay close to home. Spirit, like other companies in the industry, has struggled through the downturn. There was a stop date of Oct. 31 to get a deal done with Bombardier.

“In the current environment, I think everyone would agree that maintaining the overall value of the transaction is a good outcome for Bombardier,” company spokesman Olivier Marcil said by telephone. “It allows us to exit commercial aviation definitively, and commercial aviation has been hard hit by COVID. So there’s value in that for us.”

Private aviation has weathered the global health crisis better than commercial aviation. The pandemic has increased the appeal of small-group travel and avoiding crowds, while the quick recovery in stock and bond markets has left traditional private-jet buyers – billionaires and big business – less strapped financially than in previous downturns.

Whether Bombardier can take advantage of that remains to be seen. The company will announce it delivered 19 business jets for its latest quarter when it reports earnings Nov. 5, according to an estimate by J.P. Morgan analyst Seth Seifman. That’s five planes short of what he was expecting. 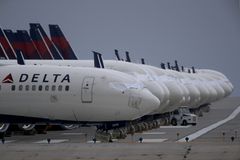 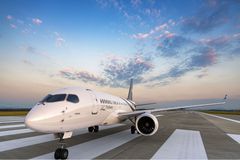