Bombardier Inc. says it is getting US$500-million in cash for the sale of its jet components and service business, which shores up the Montreal-based company’s balance sheet as it focuses on turning around its train and business jets operations.

Bombardier said Thursday that Spirit AeroSystems Holdings Inc. is buying the facilities in Belfast, Dallas and Casablanca, Morocco, for a total of US$1.2-billion, including the assumption of liabilities and other costs. The division makes wings, fuselages and other components for Bombardier and Airbus jets and employs 4,000 people at the three sites.

“This transaction represents another strategic milestone in the reshaping of our portfolio to focus on our strong business-aircraft and rail franchises,” said Alain Bellemare, Bombardier’s chief executive officer.

Walter Spracklin, a stock analyst at Royal Bank of Canada, noted Bombardier had previously announced its plan to sell the business, but said the cash value had been uncertain. “We view the US$1.2-billion price positively given the overall enterprise value of the company. We view this as positive as it further focuses [Bombardier] on the two core areas of business jets and transportation, while adding further liquidity.”

Wichita, Kan.-based Spirit will continue to supply components and spare parts for Bombardier’s fleet of Learjets, Challengers and Global aircraft brands when the deal is finalized, expected in the first half of 2020.

The aerostructure business is expected to generate US$1-billion in sales in 2019, Spirit said. The Belfast factory, known as Short Brothers, is the largest component, making wings for the Airbus A220 and parts for the Airbus A320neo and Bombardier jets.

“Belfast has developed an impressive position in business jet fuselage production, in addition to the world-acclaimed fully integrated A220 composite wing,” said Spirit CEO Tom Gentile. “This acquisition is in line with our growth strategy of increasing Airbus content, developing low-cost country footprint, and growing our aftermarket business.”

Bombardier made the announcement of the sale as it issued third-quarter financial results.

Bombardier missed estimates for its most-watched measure of earnings, hurt by higher costs. Earnings before interest and taxation (EBIT) were US$143-million for the quarter, below analysts’ estimates of US$157.15-million.

It burned through more cash than analysts had expected in the quarter as it ramped up production of its flagship Global 7500 business jet and pushed back some train deliveries.

Analysts on average were expecting free cash outflow of US$332.98-million, according to IBES data from Refinitiv.

Bombardier faced a cash crunch in 2015 after investing heavily to bring two new planes to market.

The company is in the middle of a broader restructuring, shedding underperforming commercial plane programs to focus on its more profitable business jet and rail units.

The stock price rose by 4.4 per cent Thursday on the Toronto Stock Exchange to $1.66. Bombardier’s share price has fallen by almost 70 per cent since its recent high in July, 2018.

Benoit Poirier of Desjardins has a 12-month price target of $4 on the shares, saying markets have not properly accounted for the value of the Airbus A220 program or possible margin improvements. “While 2019 will go down as another transition year, we expect 2020 to mark a turning point for the story as we expect [Bombardier] to start generating positive [free cash flow] next year,” he said in a note to clients. 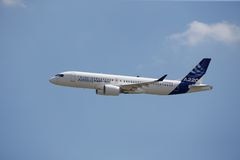