Bombardier Inc. is putting its aircraft component manufacturing factories in Morocco and Northern Ireland up for sale, and suspending financial targets for 2020 as the Canadian plane and train maker tries to maintain investor confidence through year four of a five-year turnaround.

Bombardier will seek buyers for the businesses as it consolidates its aerospace activities under one group called Bombardier Aviation, the Montreal-based company said on Thursday in a news release detailing first-quarter earnings. That means all of its aerospace businesses, including the units that build luxury and regional jets as well as component manufacturing operations in Montreal, Mexico and Texas, will fall under one umbrella led by company executive David Coleal.

“This is a strategic move and the timing is right,” Bombardier chief executive Alain Bellemare told analysts in a conference call early on Thursday. “We can now finally zoom in on the businesses that will create the most value for shareholders – and it’s business aircraft and rail.”

The sale plans highlight Mr. Bellemare’s effort to reduce costs and position Bombardier for the future by selling parts of the business where he sees the least growth potential. Over the past four years under his tenure, Bombardier handed control of its C Series airliner program to Airbus, sold its water bomber and turboprop programs to B.C.-based Viking Air Ltd., and auctioned off its Downsview, Ont., property in a bid to shore up cash and shift the company toward its most profitable opportunities.

The component manufacturing unit, known as aerostructures, makes money for Bombardier. The company said the United Kingdom’s Britain’s plan to leave the European Union was not a factor in its decision.

The Belfast factory employs about 3,600 people, making it Northern Ireland’s biggest industrial employer. The plant in 2017 got a contract to build new thrust reversers for engine nacelles on Airbus’s A320 airliner, and assembles wings for the C Series, now known as the Airbus A220.

The Belfast and Morocco sites could fetch as much as US$1-billion, National Bank of Canada analyst Cameron Doerksen said. Possible buyers include Airbus and Spirit AeroSystems Inc., according to JPMorgan analyst Seth Seifman.

The decision to sell the Belfast factory would end a 30-year presence there for Bombardier. The plane maker won control of the facility in the late 1980s, when it took over state-owned aircraft maker Short Brothers.

As Belfast digested the news, Bombardier met investors at its annual meeting in Montreal. Mr. Bellemare defended his management team’s record over four years, citing a doubling of earnings before interest and taxes, and an expansion of 300 basis points in margins as proof of progress.

But shareholders were far from bubbly.

The Canada Pension Plan Investment Board and several other institutional investors had favoured a proposal by investor rights group Médac to end the company’s dual-class share structure. Pierre Beaudoin, Bombardier chairman, repeated at the meeting that the company has no intention to drop the system. The proposal was voted down, as expected, but received significant support. Of the votes cast and not controlled by the family, 88.2 per cent backed Médac’s proposal, the group said.

“We profoundly disagree with the notion that the family’s interest is not aligned with those of other shareholders,” said Mr. Beaudoin, whose family controls the company through a special class of supervoting stock. “If it were not for the long-term approach of the Bombardier family, there would be no aerospace industry in Canada.”

Much of the concern from Bombardier shareholders centres on the company’s problems delivering on a wave of big, complex rail contracts. Bombardier shares fell sharply last week after the manufacturer issued a surprise profit warning, slashing first-quarter and full-year financial targets because of the rail trouble.

Among those big contracts is a US$630-million deal to supply new rail cars for New York’s Metropolitan Transit Authority that is expected to be completed this year. Bombardier executives on Thursday said they will overcome the challenges, even if it takes several quarters. Three of the five problematic contracts should be completed this year, Mr. Bellemare said.

Rail boss Danny Di Perna said while some of the trouble is out of the company’s control, such as issues with infrastructure, Bombardier can fix much of it. He mentioned issues with train doors and the reliability of brake calipers, for example, and said the company is working on better managing internal resources and the supply chain.

“I can assure you that when we get it right, we bang out beautiful trains. It’s up front where we stumble sometimes,” Mr. Di Perna said. “We’ve got many projects going on simultaneously. … And when you have one that gives you a hiccup, it kind of gives you a knock-on effect."

Bombardier also suspended its commitment, for the time being, to previous 2020 financial goals. Mr. Bellemare had set a target for it to generate US$750-million in free cash flow and earnings before interest, taxes, depreciation and amortization of US$2.25-billion on revenue of US$20-billion by 2020.

“I’m not suggesting [the 2020 goal] is no longer applicable,” John Di Bert, Bombardier’s chief financial officer, told analysts on the call. “What I am saying is that we are really focused on 2019. We just want to be prudent here and kind of be thoughtful before we get into any precision on 2020."

Bombardier reported first-quarter earnings that are largely in line with preliminary results announced last week. Adjusted core earnings climbed by US$1-million to US$266-million in the three months ending March 31, while revenue fell 13 per cent to US$3.5-billion. Free-cash-flow use was $1-billion for the quarter. Financial forecasts for 2019 were reaffirmed. 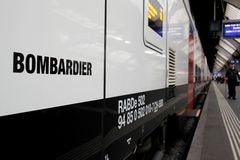 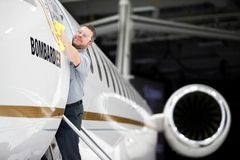 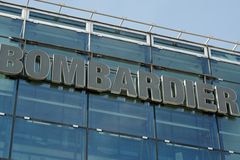