Pressure is starting to build on Bombardier Inc. to ramp up development spending on new jets as rivals continue to unveil plans for competing aircraft, a situation that raises questions about the Canadian company’s financial targets as it fights to recapture investor interest.

U.S.-based Gulfstream announced last week it would bring two new jets to market – including one, the G400, that aviation analyst Richard Aboulafia said would deliver an instant “knockout punch” against Bombardier’s Challenger 650. That follows disclosure by France’s Dassault Aviation SA that it is planning two new large-cabin jets. Competition is only poised to heat up over time with more new products from other manufacturers, including Brazil’s Embraer SA and U.S. giant Textron Aviation , according to Scotiabank equity analyst Konark Gupta.

Bombardier shares have fallen in four of the last five trading sessions since the Gulfstream announcement, losing eight per cent overall. They closed Friday at $2.03 on the Toronto Stock Exchange.

“We believe [Bombardier] is now more likely to roll out new models, derivatives or refreshes rather than staying quiet, in order to remain competitive with Gulfstream, Dassault and potentially others,” Mr. Gupta said in a recent research note. The Montreal-based jet maker “could be at risk of losing market share and facing revenue or margin headwinds if it doesn’t invest in new products,” he said.

That means Bombardier’s stated plans to limit capital expenditure at about US$200-million a year over the next several years might not be workable, which in turn would affect its goals for free cash flow, according to the analyst. The company is forecasting that it will turn cash flow positive next year on its way to generating more than US$500-million of free cash by 2025, a target that hinges on limiting spending.

Bombardier chief executive Éric Martel and chief financial officer Bart Demosky are trying to stage a recovery for the Canadian industrial giant that hinges on a slimmed-down business model focused solely on selling and servicing private jets. The company has a lineup of popular planes, such as the all-new Global 7500, that are generating orders, but its still-weak financial position means it does not have the same capacity as some competitors to update older models or develop all-new designs.

“The challenge Bombardier has is they don’t have access to capital at affordable rates,” said aerospace consultant Rolland Vincent, a former Bombardier executive. “But they have a few years. I don’t think they have to do anything right now.”

Bombardier spokeswoman Anna Cristofaro declined to comment when asked whether management sees the capital expenditure forecast as a hard ceiling or if it could be increased as needed. “We’re very proud of our current aircraft offerings, and we’ll continue to bring new and innovative products to the market,” she said via e-mail, adding executives will be able to provide more colour when the company reports third-quarter results later this month.

Over the past three years, Montreal-based Bombardier has announced plans to refresh four separate jet models. The large-cabin Global 5500 and 6500 aircraft were updated to bring them closer in quality and performance to the company’s flagship Global 7500, a US$75-million plane designed from scratch that entered service in late 2018.

A stripped-down version of the Learjet 75 was announced in 2019, although Bombardier has since decided to cease production of its entire Learjet line. Last month, the company said it would bring to market an improved version of its Challenger 350 aircraft, to be called the Challenger 3500.

Bombardier spent more than US$1-billion to develop the Global 7500, but much less on the other planes, which are not clean-sheet designs but revamped versions of existing aircraft. The company’s methods for refreshing jets (for example, transposing its patented “Nuage” seat technology, first introduced on the 7500, into the other Globals and into the Challenger 3500) has given it a “proven track record to build on for achieving meaningful upgrades at a low cost with less development risk,” Mr. Demosky told industry analysts last March.

Analysts say the Bombardier jet in most urgent need of a replacement is the Challenger 650, a popular but old jet with a basic airframe design that has not changed since before Bombardier took over the Challenger program with its purchase of Canadair Ltd. from the federal government in 1986. They say that need is even more obvious now that Gulfstream has announced the new G400, which will come to market in 2025.

“The G400 is a major challenge that will require them to think about raising the money” to develop a new competing plane, Mr. Aboulafia said in an interview. “It has to be an all-new plane. You don’t do refreshes of 40-year-old models. … They’re going to lose their market position unless they can do something.” 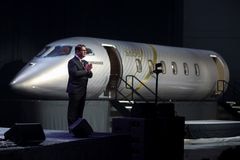 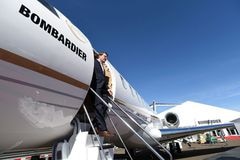