A move by British insurer Aviva Plc to put part of its Asian operations up for sale opens a door for Canadian insurance giant Manulife Financial Corp. to strengthen its distribution and digital capabilities in the region, analysts say.

Aviva announced on Monday it will look for buyers for its operations in Vietnam, Hong Kong and Indonesia, after completing a review of its Asian businesses that began earlier this year. Manulife declined to comment on whether it has an interest in purchasing the Aviva operations, but September media reports listed the Canadian insurer as a potential bidder, among others.

“Acquiring Aviva’s Asian operations … would broaden Manulife’s distribution capabilities and strengthen its ties to a digital leader,” said Paul Holden, a research analyst with CIBC World Markets, in a research note on Monday. “An Asian tuck-in acquisition makes sense and should be viewed positively [for Manulife].”

Manulife, which has been boosting its presence across Asia, already operates in each of the three regions Aviva plans to exit. In its most recent quarterly earnings, Manulife reported double-digit growth for its Asian businesses with $1.4-billion in insurance sales.

With Asia set to represent 60 per cent of the world’s middle class, both of Canada’s largest insurers – Manulife and Sun Life Financial Inc. – have had strong momentum in their Asian markets. Younger demographics in countries like Indonesia and Vietnam are opening up opportunities for insurers to tap into a growing middle class that is just beginning to look at financial products.

Both companies also have significant cash on hand for a potential acquisition. In September, Scott Chan, an analyst at Canaccord Genuity, told The Globe and Mail that Asia is likely "high on both firms’ wish lists in using excess capital to meet their above-average earnings growth target in that region.”

Analysts estimate Aviva’s operations could have an earnings value between $200-million and $300-million, despite disclosure documents showing the majority of operating profits from its Asia businesses was coming from Singapore, which Aviva plans to retain.

Mr. Holden said while acquisition would not be a “scale play” and unlikely to have a “meaning financial impact" in the near term, it would be viewed as a positive deal for Manulife that has longer-term potential.

“Given this is not a scale transaction, this is far less likely to be of interest to Sun Life,” he added.

Two months ago, both Sun Life and Manulife were listed among about a half dozen interested bidders for Aviva operations in Asia. At the time, according to media reports, those operations included only businesses in Singapore and Vietnam.

After the conclusion of the Asian review, Aviva announced this week that Singapore is no longer up for sale, leaving opportunities for potential buyers to acquire its other operations in Hong Kong, Vietnam and Indonesia.

Rather than looking for an acquisition to bulk up operations in these regions, Manulife may have “strategic reasons” for pursing Aviva, Mr. Holden said. Aviva’s Hong Kong business has a joint venture partnership with Tencent Holdings Ltd., one of the world’s largest video-gaming companies.

“Having a closer relationship with Tencent could lead to more digital innovation and/or distribution opportunities,” Mr. Holden said.

In addition, the head of Aviva Vietnam, Paul Nguyen, is a former Manulife executive, who led the Manulife Vietnam business for over four years. That could lead, Mr. Holden said, to a “smoother transition” between the two firms. 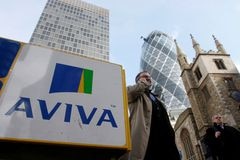