Brookfield will pay $48.86 a share for nearly 49 million shares in Genworth MI Canada – a 5-per-cent discount to the price at Monday’s close on the Toronto Stock Exchange, but an 18-per-cent premium compared with the date when the company was formally put up for sale.

The deal appears to relieve a headache for Richmond, Va.-based Genworth, which has waited years for regulators to approve a separate deal that would see the American company acquired for US$2.7-billion by a privately held Chinese buyer, China Oceanwide Holdings Group Co. Ltd. That transaction, which was first announced in October, 2016, has stalled while awaiting approval from Canadian regulators and federal officials, who are required to consider the potential impact on Canada’s mortgage industry and have held the deal up over national-security concerns, even after U.S. regulators gave it a green light.

Earlier this summer, Genworth Financial announced it was considering “strategic alternatives” for Genworth MI Canada, seeking to break the deadlock. That raised the prospect that, absent a suitable buyer, Genworth Financial’s stake in its Canadian subsidiary might have to be sold into the public market at a discount. But Brookfield emerged with deep pockets and the industry expertise needed to take control.

“We are pleased to find such a high-calibre buyer for our interest in Genworth Canada,” said Genworth Financial president and chief executive Tom McInerney.

The Canadian arm of Genworth is a rare asset. It is Canada’s largest private-sector mortgage insurer, providing a backstop against defaults to residential mortgage lenders, and it trails only the government-owned Canada Mortgage and Housing Corporation (CMHC) in size. Its only privately owned competitor is Canada Guaranty Mortgage Insurance Company, which is jointly owned by Ontario Teachers’ Pension Plan and financier Stephen Smith.

Genworth Canada currently has a 33-per-cent share of the country’s mortgage-insurance market, while CMHC holds half and Canada Guaranty the remaining 17 per cent, according to data from RBC Dominion Securities Inc. But the federal housing agency has been ceding its share to the private insurers.

Genworth’s improving position in a highly consolidated market made it a logical target for Brookfield Business Partners, which seeks to acquire and manage companies in sectors where the barrier to entry is high. Brookfield also has extensive expertise in mortgages and housing: It is one of the largest residential real estate developers in North America, active in real estate financing, and owns the Royal LePage brokerage.

The total share of mortgages that are insured has been falling, from 57 per cent in 2015 to 41 per cent in 2019, according to a recent CMHC report. The shift toward uninsured mortgages comes as regulators have tightened rules on mortgage lending, requiring borrowers to meet stricter tests to qualify for mortgage insurance.

Even so, the housing sector as a whole has continued to grow, adding a steady stream of new demand for mortgage insurance, particularly from first-time home buyers. And Brookfield is betting that Genworth can grab a larger share of the market, making full use of Brookfield’s deep relationships with banks that do the lion’s share of Canada’s mortgage lending.

The deal is expected to close before then end of 2019, subject to approvals from Canada’s banking regulator and Minister of Finance.

Brookfield is not currently looking to acquire the 43 per cent of Genworth MI Canada’s shares that are owned by other investors. But Jaeme Gloyn, an analyst at National Bank Financial Inc., said that prospect “is not entirely off the table" and “would likely unfold at a premium” to the price Brookfield is paying for control.

Ratings agency DBRS Ltd. called the deal “positive for Genworth Canada,” which has been more stable than its U.S. parent.

Oceanwide Holdings consented to the transaction and extended the deadline to finalize its own deal with Genworth Financial until Dec. 31. 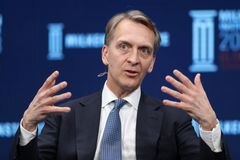