Brookfield Property Partners LP collected just 34 per cent of the rent from its enclosed malls and was forced to shutter hotels during the first few months of the coronavirus pandemic, sending the real estate owner to a US$1.5-billion loss in the second quarter.

Brookfield, which has more than 170 malls in the United States and retail properties in Canada, China, South Korea, Brazil and Britain, lost US$1.26 a unit in the quarter. That compared with a profit of 12 US cents a unit, or US$23-million, for the same three months last year.

Brookfield said on Thursday in its earnings news release that its second quarter was slammed “significantly by widespread mandated closures in our U.S. retail portfolio related to the global economic shutdown, which caused a decline in mall revenues, fee income, and an increase in credit loss reserves.”

However, the landlord said it believed the fallout from the pandemic shutdowns was mostly limited to the second quarter and said July’s rent collection was “significantly stronger.”

Like other mall operators, Brookfield deferred rent for some of its tenants and has provided reductions for those that have not been able to open or sell products online, such as restaurants in malls.

“The options are: You sort of hold the line on it and they are unable to reopen, or we do what we can to sort of assist them in getting up and running,” Brookfield chief executive officer Brian Kingston said on a conference call to discuss the earnings.

Asked if the percentage of retail tenant abatements was about 15 per cent, Mr. Kingston said it was well below that level.

In a letter to unit-holders on Thursday, Brookfield said its hospitality business “bore the brunt” of the fallout from the pandemic, as hotels were either closed or had ultralow occupancy rates owing to travel restrictions. “Hotels do not carry the benefit of long term leases, so revenue was significantly impacted,” it said.

Parent company Brookfield Asset Management Inc. announced in May a plan to spend US$5-billion to prop up retailers and help mitigate its investment in retail. It plans to provide capital to retailers in exchange for a non-controlling stake in the business.

Mr. Kingston said some investments have been made, but did not provide names of the retailers. He expects the company will do more by the end of the year. “There’s a lot in the hopper,” he said.

Although Brookfield said rent collection among its office properties was “virtually 100 per cent,” lower revenue from parking lots and retail in those buildings contributed to the decline.

Brookfield and other mall operators have also suffered from the deluge of store closings and retail bankruptcy filings. Big tenants such as luxury department store chain Neiman Marcus, Lord & Taylor and J.C. Penney, and scores of smaller tenants such as fashion stores J.Crew and Brooks Brothers, have filed for credit protection.

Brookfield said it was exploring whether to turn vacated space into warehouses and fulfillment centres for online purchases.

“We have begun to test and trial with retail tech companies that are providing solutions for last-mile delivery,” Jared Chupaila, the head of Brookfield’s retail group, said on the conference call.

The results provide a window into how the pandemic restrictions devastated the owners of North American commercial property, particularly malls.

In Canada, the major mall operators are privately held real estate companies owned by pension funds. As such, it is difficult to ascertain how much of a hit their business is taking.

Alex Arifuzzaman, a retail real estate consultant, said he believes Canadian malls are performing similarly to Brookfield’s malls. The privately held malls have not disclosed their rent collection, although their industry group said rental revenue is increasing from April, May and June.

Brookfield’s second-quarter loss comes about two years after it doubled down on retail with its US$15-billion acquisition of GGP’s 125 U.S. shopping centres.

Brookfield Asset Management announced in July that it is supporting its real estate division with US$1-billion so that Brookfield Property can buy back nearly 75 million of its units at US$12 apiece.

Brookfield Property units closed down 1 per cent at US$11.49 on Thursday on the Nasdaq. Brookfield in buy mode despite $25-billion drop in assets
Subscriber content
May 14, 2020 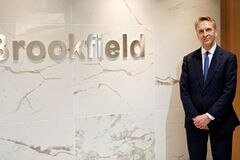