Brookfield Infrastructure Partners LP has revised its hostile takeover bid for Inter Pipeline Ltd. yet again, this time to let shareholders opt for an all-cash buyout.

Brookfield is already Inter Pipeline’s largest shareholder. In February, it launched a hostile bid for the energy infrastructure company that was worth $16.50 a share, valuing Inter Pipeline at $7.1-billion. At the time, Brookfield was willing to pay a maximum cash consideration of approximately $4.9-billion, with the remainder to be paid in shares.

In early June, Pembina Pipeline Corp. emerged as a white knight with an $8.3-billion all-share takeover bid for Inter Pipeline. Crucially, the bid received the blessing of Inter Pipeline’s board of directors.

To counter, Brookfield raised its own bid one day later to $8.47-billion, based on its closing price before the announcement. It also said it was willing to pay as much as $5.6-billion in cash.

But now Brookfield has revised its bid once again. It will give Inter Pipeline shareholders the option to receive all cash – in other words, there is no longer a limit on the cash portion of the deal.

The late change of heart raises questions about Brookfield’s confidence in its bid, but the company said it is simply responding to investor input.

“The revised offer is reflective of the feedback we have received from many Inter Pipeline shareholders who are supportive of our offer but indicated a preference for this revised structure, particularly in contrast with the alternative, less certain, no cash bid,” Brookfield wrote in an e-mail to The Globe and Mail.

The share prices of Pembina and Brookfield were mostly flat by midday Friday, as was Inter Pipeline’s stock, which is trading around $20.30 a share.

In an e-mailed statement, Pembina said the latest bid revision “does not change the fact that the Pembina offer is superior in value with greater upside for Inter Pipeline shareholders.”

If Pembina’s bid is successful, its shareholders will own 72 per cent of the merged company, with Inter Pipeline’s holding the remaining 28 per cent. The merged company would be run by Pembina’s executive team.

Pembina and Inter Pipeline operate similar businesses in different parts of Western Canada, so Pembina is marketing the takeover as a play for geographic diversification. “Scale, financial strength and diversity will enable the combined companies to do projects neither could do on their own,” Pembina wrote in an investor presentation.

By offering shares, Pembina is looking to keep its balance sheet in solid shape. However, Inter Pipeline has roughly $5-billion worth of debt on its books.

Although Brookfield has raised the cash portion of its bid, the company believes it can comfortably do so without overextending its balance sheet. “We are pleased to tailor our offer based on shareholder interests and to be in a position to do so given our strong liquidity position,” the company wrote in its e-mail to The Globe.

Brookfield is hoping to convince the Alberta Securities Commission to rule against the termination fee that Inter Pipeline will have to pay Pembina if their friendly merger is not successful. That’s because a successful bid from Brookfield would effectively leave it on the hook for the fee. The hearing is set for July 7, and Brookfield has said it will increase its bid if the fee is removed.

For its part, Pembina hopes to win over Inter Pipeline’s shareholders with a juicier dividend. As part of its takeover bid, it raised its own monthly dividend by one cent a share, to 22 cents. If the takeover is approved, Inter Pipeline’s shareholders would see their monthly payout of four cents jump 175 per cent – to 11 cents, for half a Pembina share – immediately upon closing.

Pembina expects the takeover to deliver pretax synergies worth $150-million to $250-million annually, the majority of which are expected to come from lower general, administrative and operating costs – which tend to mean job losses.

Inter Pipeline was put in play for a takeover after its stock declined sharply because of weak oil and gas prices and continuing cost overruns and delays at its Heartland Petrochemical Complex, near Edmonton. The company has been building the facility for more than three years and was struggling to find a partner on the project until Pembina came along. The facility will convert Alberta propane into polypropylene pellets for manufacturers. 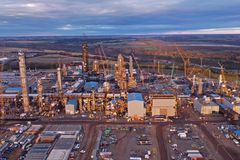