BRP Inc. rode sales of three-wheeled and utility vehicles to record third-quarter revenue, boosting its financial guidance for the third time this year.

The maker of Ski-Doo snowmobiles and Sea-Doo watercraft saw profits jump by 50 per cent year over year to $135.3-million last quarter.

“Our efforts are paying off, and we don’t intend to ease up,” chief executive Jose Boisjoli said.

Much of the Quebec-based company’s $1.64-billion revenue – up nearly 18 per cent from a year earlier and a record for the third quarter – came from sales of its Can-Am side-by-side vehicles. Their revenue grew by more than 30 per cent, more than double the industry rate for side-by-sides, BRP said.

Sales of its three-wheeled roadsters jumped nearly 90 per cent, propelled by the new Can-Am Ryker. With a starting price of $8,500, the sporty trike almost halves the price tag of its older cousin, the Can-Am Spyder, in a bid to attract riders who are younger and more cost-conscious than BRP’s typical three-wheel buyer, whose average age is 59.

About 30 per cent of Ryker buyers are women and 70 per cent are under 55, Mr. Boisjoli said.

Snowmobile sales jumped nearly 30 per cent because of early snowfall “that has spiked customer interest,” he added.

Marine product sales continued to lag, however, dropping by about $1-million or 1 per cent as higher boat revenue after a recent acquisition failed to completely make up for fewer outboard engine purchases.

“I would say it was not the best season for our first boat business,” Mr. Boisjoli said on a conference call with investors on Wednesday.

In August, the company closed a deal to acquire a majority stake in Australia’s largest aluminum boat maker, Telwater Pty Ltd., the firm’s third push into watercraft over the past year and a half after buying Alumacraft Boat Co. and Manitou Pontoon Boats in the summer of 2018.

“Our marine strategy is a mid- to long-term play. And that’s why we’ve decided to invest in companies and become a better integrator of engines within boats,” said chief financial officer Sebastien Martel.

He also played down concerns about a possible economic downturn.

“Demand is still there, and the consumer is still looking into the stores to buy goods,” he said. “We’re not seeing any changes in consumer behaviour from what we saw in Q3 and what we saw in the previous quarters of the year.”

In its outlook, BRP said it now expects full-year revenue to grow 12 per cent to 14 per cent compared with the earlier guidance for growth of 10 per cent to 13 per cent. Full-year normalized earnings a diluted share are expected to come in between $3.70 and $3.80, up from an earlier forecast of between $3.65 and $3.80.

“This increase is largely supported by stronger growth expectations for the powersports group” – side-by-side vehicles, ATVs and motorized trikes, as well as Sea-Doos and Ski-Doos – Mr. Poirier said in an investor note.

Revenue totalled $1.64-billion, up from $1.39-billion in the same quarter last year.

Analysts on average had expected a profit of $1.31 a share on nearly $1.51-billion in revenue, according to financial markets data firm Refinitiv. 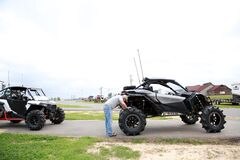 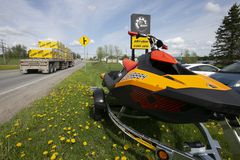