Caisse de dépôt et placement du Québec is increasing its bet on Cirque du Soleil by buying out the founder of the famed circus troupe.

The Canadian pension-fund giant is acquiring the holdings of Guy Laliberté and doubling its stake in privately held Cirque to 20 per cent, the Caisse said Monday.

No further financial details were disclosed.

Mr. Laliberté will remain involved in Cirque’s creative process and retain unspecified “economic interests” in the company, the Caisse said. He is no longer involved in Cirque’s day-to-day operations, but still has a seat on the board and is consulted on shows. Texas-based private equity firm TPG Capital will remain the majority shareholder, according to the pension fund.

“We are happy to strengthen our presence among shareholders of Cirque du Soleil, an iconic entertainment brand with worldwide renown,” Caisse chief executive Charles Émond said in a statement. “[We intend] to continue backing Cirque du Soleil in its development projects that have showcased Quebeckers’ creativity and expertise for several decades.”

Cirque was founded in 1984 and currently employs more than 4,900 people.

Last June, The Globe and Mail and La Presse reported that Cirque was laying the groundwork for a possible initial public offering in early 2020, as the storied entertainment company pushes ahead with a global expansion strategy. The company was preparing documentation for that option, but there is no current plan to proceed with an IPO and no updated timeline, a well-placed source told The Globe Monday. The Globe is not identifying the source because they were not authorized to speak to the media about the matter.

TPG controls Cirque after buying a roughly 55-per-cent interest in the company from Mr. Laliberté in 2015. Chinese fund manager Fosun Capital Group bought about 25 per cent, and the Caisse took 10 per cent in a deal that was estimated to be worth $1.5-billion.

Mr. Laliberté kept 10 per cent, but is now cashing out.

Going public would give Cirque greater financial flexibility as it moves ahead with an ambitious acquisition strategy steered by chief executive Daniel Lamarre, who is trying to reshape the company beyond the circus arts to other live-entertainment content.

Over the past two years alone, Cirque has purchased The Works Entertainment, the production company known for The Illusionists franchise, as well as Blue Man Group and VStar Entertainment Group, which is best known for its children’s shows, PAW Patrol Live!

Cirque is also branching out geographically, opening its first resident circus show in China and developing lower-budget shows specifically for emerging markets such as India.

That growth has not come without risk. Moody’s Investors Service has said the company’s largely debt-funded expansion strategy could be unsustainable.

With an IPO, Cirque would buck the trend of Quebec companies snubbing public markets in recent years. The situation has become so acute that a blue-ribbon panel of experts was convened in 2016 to reverse the tide. It recommended offering special tax breaks and incentives to companies weighing public listings. 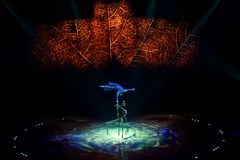