The Caisse de dépôt et placement du Québec is lining up behind Toronto’s ecobee Inc., co-leading a $47-million funding round with AGL Energy Ltd. and Business Development Bank of Canada, capping off a total investment this year of $127-million for the smart-thermostat maker.

The investment, to be announced Thursday, comes on the heels of ecobee’s $80-million financing in March, led by Energy Impact Ventures, a New York fund backed by global electrical utilities, and previous investors Thomvest, Relay Ventures and Amazon.com Inc.’s Alexa Fund. At the time, The Globe reported the company expected to raise roughly $50-million more within the next two months to fund its goal of reaching $1-billion in sales by 2020.

Launched in 2007 as a smart-thermostat company, ecobee recently expanded to include commercial energy-management systems and voice-activated light-switches powered by Amazon’s Alexa technology. Thursday’s announcement brings the total invested in ecobee to more than $200-million. The financing, the company says, will position it to become a key player in smart-home technologies; it already has about a third of the smart-thermostat market, where it competes with Alphabet Inc.’s Nest, according to NPD Group.

The Caisse, which manages money for public pension and insurance funds in Quebec, in recent years re-entered the venture capital (VC) space after about a decade away. Ecobee marks the eighth later-stage Canadian tech startup investment it has since made, said Thomas Birch, the fund’s vice-president of fund management and technologies.

The Caisse invests in a number of VC funds across Canada, working with fund managers to track startups over time to assess candidates for its own investment at a later stage. “It’s an opportunity for a pension fund to make a high-risk investment in a de-risked fashion, because we know the business so well, and we know their cash requirements,” Mr. Birch said in an interview.

One such fund is Toronto-based Relay Ventures, which has taken part in several of ecobee’s investment rounds; ecobee’s chief executive, Stuart Lombard, was also once a partner at a Relay predecessor. Mr. Birch said he has followed ecobee’s rise over the past decade and, after conversations with Relay managing partner John Albright, determined the Caisse was ready to invest in a substantial round.

Mr. Lombard said the Caisse’s support will help ecobee continue its rapid expansion as it aims to grow its revenues.

“We have the resources with this financing to build our vision,” the CEO told The Globe, without ruling out a future initial public offering. “We believe that, out of this space, there will be an Amazon or Facebook or a company of that ilk – and our goal is to be that company.”

The Caisse, Mr. Birch said, seeks startup investments that focus on clean technology, the Internet of Things, and artificial intelligence – and ecobee “ticks all the right boxes,” he said. “There’ll be many more investments like this [by the Caisse] in the next number of years.”

Last year, the Caisse invested $136-million in Montreal’s Lightspeed POS Inc, leading a buyout of a Silicon Valley venture-capital firm’s stake and adding growth capital to the retail tech firm. A year earlier, it spearheaded an $82-million investment in another Montreal startup, Hopper Inc., which lets users hone in on the best time to make travel purchases. 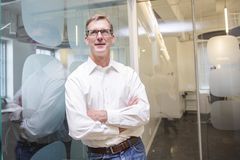