The federal government will finance a $1.7-billion transmission line across Lake Erie that will transmit large volumes of electricity between Ontario and the United States – but it could mean an increase in carbon-intensive power to a province that worked hard to eliminate it.

The Canada Infrastructure Bank (CIB), a Crown corporation, announced on Tuesday it will provide a low-interest, long-term loan of $655-million for construction of the Lake Erie Connector, a 1,000-megawatt intertie spanning more than 100 kilometres across the lake. CIB chief executive officer Ehren Cory said the line will allow Ontario to export its electricity to one of the world’s largest power markets, while improving the reliability of its own grid.

The CIB said terms of the loan, including the interest rate and term, were confidential.

Michigan-based ITC Holdings Corp., a large electricity transmission company, is the proponent of the planned line. ITC says it has all necessary permits and could begin construction this year – a major attraction to governments seeking shovel-ready projects to help spur economic recovery from the COVID-19 pandemic. Completion would take four years.

Some of the electricity flowing into Ontario over the connection might come from carbon-intensive sources.

ITC, which is owned by St. John’s-based Fortis Inc., a holding company with large electric and gas utilities in North America and the Caribbean, said the intertie would save Ontarians $100-million in electricity costs annually.

“It’s about being able to sell during those times when there’s excess power, and then import when there’s times of need,” executive vice-president Jon Jipping said.

The IESO declined to comment about the project because it has not yet signed a contract with ITC yet. However, spokesman Andrew Dow said trading electricity provides flexibility to respond quickly to fluctuating demand. “Being interconnected provides resiliency during extreme events, such as those seen in Texas earlier this year,” he said.

Catherine McKenna, the Minister of Infrastructure and Communities, said the project offered an opportunity to partner with the United States to meet climate-related objectives.

The intertie would link Ontario with the PJM Interconnection LLC, which co-ordinates movement of electricity across 13 U.S. states with a combined population of 65 million.

PJM’s generation mix is more carbon-intensive than Ontario’s. According to PJM’s most recent annual report, natural gas made up 42 per cent of its online fuel mix during the summer of 2019, with nuclear at 27 per cent and coal at 24 per cent. Renewables accounted for just 6 per cent. The mix has shifted from coal to natural gas during the past decade, but PJM expects increased renewables in future years.

Ontario has been a net exporter of electricity for more than a decade. (According to the IESO, in 2019 Ontario exported 19.8 terawatt hours (TWh) while importing just 6.6 TWh.) But exports are expected to decrease early this decade after the retirement of Ontario’s aging Pickering Nuclear Generating Station and while other nuclear plants undergo refurbishment.

In its latest planning outlook, published in December, the IESO said it expects the province will soon be a net-importer. Ontario’s status as an exporter would resume after the refurbishments, in the 2030s, the IESO said.

The Lake Erie Connector’s progress is an apparent setback to those who advocate increased co-operation on electricity between Canadian provinces. It also demonstrates the powerful allure of the large U.S. electricity market for Canadian utilities.

Canada’s clean power puzzle: Provinces sell to the U.S., but not each other

Over the years, many organizations have said teaming up provinces rich in hydroelectric generation with provinces that produce abundant wind and solar power could supercharge adoption of renewables and help Canada meet emissions targets.

The Ontario Clean Air Alliance, for instance, has long urged the province to import more electricity from Quebec. Its chair, Jack Gibbons, said the Lake Erie Connector would facilitate exports of gas-fired electricity from Ontario into the United States, and more fossil fuel-generated imports into the province.

“I fail to see why the government of Canada has a sense that it should be financing this project,” he said. “It certainly does not make sense to import more electricity produced from fracked gas in the United States. That’s not good for the environment.”

The infrastructure bank says it operates “at arm’s length” from the government; however, Parliament has approved spending of up to $35-billion, and the government sets priorities for its investments.

He added that the Lake Erie Connector is CIB’s second clean power transaction. The first was Oneida Energy Storage, a project in Ontario that will store surplus power during off-peak periods and release it when demand is higher.

”It won’t be our last” clean energy transaction, he said. “We are committed to doing many more of these.” 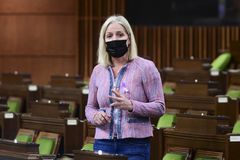 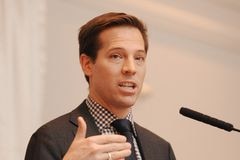