Canada is set to see more job losses in May, but the summer months are poised to show a cautious rebound in employment as provinces ease COVID-19 restrictions.

On Friday, Statistics Canada will release its Labour Force Survey for May. The median estimate from economists is for employment to decline by 500,000 people that month, less steep than April’s loss of nearly two million and March’s drop of roughly one million. In turn, the unemployment rate will likely soar above the record 13.1 per cent set in 1982.

“I suspect employment is going to go down a little bit more,” said Mikal Skuterud, an economics professor at the University of Waterloo.

Many companies resumed operations in May, but Friday’s results won’t capture the full extent of how reopening plans factored into hiring in the month. For its report, Statscan surveyed households on employment conditions between May 10 and 16.

“Indeed, with reopenings largely only starting in the second half of the month, many of those returning to work would not have been captured in the survey week,” Benjamin Reitzes, a Bank of Montreal strategist, said in a client note.

For instance, the first stage of Ontario’s reopening plan – which allowed all construction to resume, along with retail businesses that are not in indoor malls – took effect on May 19. In the Montreal area, non-mall retailers were allowed to return on May 25, a delay from initial plans because the region struggled with the spread of infections. And in British Columbia, which had looser restrictions than other major provinces, many businesses didn’t elect to reopen until after the Victoria Day weekend.

As such, a rebound in overall employment levels could be pushed to June.

For some companies, however, weaker sales have thrown rehiring into doubt. Paula DiRenzo, the owner of Blackbird Vintage Finds, is working solo at her gift shop in Toronto’s Distillery District because customer traffic is so low, given the area’s reliance on international tourists. Before the pandemic, she employed one full-time and two part-time employees. “At the moment, I can’t even predict when I can call anybody back,” Ms. DiRenzo said.

Prof. Skuterud said Friday’s report could shed light on whether some workers are beginning to pick up shifts, or conversely whether temporary layoffs have turned permanent. “I think there were a lot of people in March and April who weren’t quite sure what their employment status was," he said. "Some of that will be cleared up by now.”

The May labour report could also show tentative signs of progress. From February to April, the total number of hours worked in the economy plunged by nearly 28 per cent. Given that many provinces – such as New Brunswick, Saskatchewan and the parts of Quebec outside Montreal – had started easing restrictions by Statscan’s survey period, this metric could be set for improvement.

Still, there are considerable hurdles in the months ahead in recovering lost jobs.

For one, Prof. Skuterud said companies could struggle to lure workers back. “There may be jobs available, but [some people] don’t want to go to these jobs because they’re actually afraid” of the virus, he said. “If I know I can stay at home and get $2,000 a month and be healthy, that affects my incentives,” he added, referencing the Canada Emergency Response Benefit for affected workers.

Between April 19 and May 14 – roughly the span between labour survey periods – there was an increase of 1.25 million unique applicants to CERB seeking emergency income support. Not all would have lost employment as the benefit also covers those whose income dropped substantially. The numbers do suggest, however, that shockwaves from COVID-19 continued to reverberate through the economy in May.

Further, many industries that collectively employ millions of Canadians will remain under tight restrictions for the foreseeable future.

“A lot of the sectors that have been worst hit from the layoffs either aren’t allowed to reopen at all until there’s a vaccine … or they have to reopen at much reduced capacity,” said Andrew Grantham, senior economist at Canadian Imperial Bank of Commerce, pointing to restaurants and spectator sports as two industries that are significantly curtailed.

Because of reduced demand, Mr. Grantham said there could be a second wave of distress for companies that rely on orders from ailing industries. For instance, he said a company that sells glassware to restaurants, while maybe not directly affected by lockdown measures, could suffer from restrictions on its clientele.

“There are ripple effects throughout the economy and those will continue for some time,” he said.

How remote-work capability has cushioned job losses in different sectors

Industries less suited to working from home have seen an average drop in employment of about 20 per cent since February, while those best suited have seen a 10 per cent drop

Across the Canadian job market, the capacity for telework appears to have provided some protection from the worst of the job losses.

“This historic slump, courtesy of lockdowns imposed by government to slow the coronavirus pandemic, could have been even more brutal were it not for the capacity of several businesses to allow employees to work from home,” Krishen Rangasamy, an economist at National Bank Financial, said in a note.

Those industries less suited to working from home – such as retail, construction and the arts – have seen an average drop in employment of about 20 per cent since February. At the negative extreme are food services and accommodation, which have virtually no ability to shift jobs out the workplace and have been rocked by a 50-per-cent decline.

Those industries best suited to working remotely, meanwhile, such as finance, insurance and professional services, have seen employment drop by an average of 10 per cent since February.

Only recently has communications technology evolved to a point that it could enable a mass transfer of work out of the office and into the home, said Ron Shuttleworth, a partner at Toronto-based Oak Hill Financial and a veteran of the Canadian tech sector.

“The maturity of cloud computing, the scalability and security of it, has enabled us to do this in ways that weren’t possible even five years ago,” Mr. Shuttleworth said. “The ability to connect, which now seems so easy and seamless, didn’t exist in the same way.” 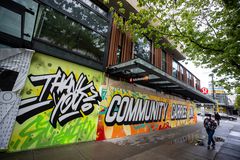 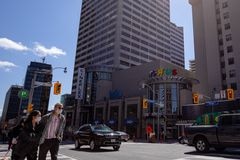