Canada will need to adopt tougher rules for companies to disclose the risk and opportunities they face as the world transitions to a lower-carbon economy, two members of a federal advisory panel said Wednesday.

Canadian jobs, tax revenue and pension funds depend heavily on carbon-intensive sectors – not only in oil and gas but across the economy – and the country cannot afford to pay short shrift to the looming climate-related transformation across the world, Andrew Chisholm, a director with the Royal Bank of Canada and former global strategy officer for Goldman Sachs, told a financial conference.

“We are overweight in carbon when the rest of the world is saying we want less carbon,” Mr. Chisholm said.

Mr. Chisholm and Barbara Zvan, chief risk and strategy officer for Ontario Teachers’ Pension Plan, are members of the federal government’s expert panel on sustainable finance, which is due to report to Finance Minister Bill Morneau this spring. They spoke Wednesday at the GLOBE Capital conference in Toronto, a two-day session on sustainable finance.

The two financial experts said Canada must have clearer policy direction on climate to provide incentives for investors and corporations to reduce the risk they face from the climate-related transition and seize the opportunities. They said there are opportunities for investment in renewable energy and technology to reduce carbon-intensity in the broader economy, including oil and gas.

The panel is building on the work of Bank of England Governor Mark Carney, who appointed former New York mayor Michael Bloomberg to head a Task Force on Climate-related Financial Disclosures, which urged the global financial sector to adopt more uniform and stringent measures for reporting risk.

Opinion: Executive compensation must be recalibrated to include climate-related governance

Opinion: How the courts can help in the climate change fight

The Canadian panel produced an interim report last fall, which called for clarity on climate policy, including carbon pricing. The federal government is now battling three provinces – Ontario, Saskatchewan and New Brunswick – over its plan to impose a federal carbon tax in those jurisdictions, where provincial governments oppose a broad-based levy.

“Clear policy signals, especially with regard to carbon pricing, allows the market to make long-term choices with regard to sustainability,” the panel’s interim report said.

Mr. Chisholm said the group will urge both levels of government, regulators and the private sector to embrace a more coherent and determined approach to managing risk and providing incentives to invest in areas where Canada can lead global markets. That includes efforts to reduce costs and the carbon-intensity of existing industries, including oil and gas.

“We need to decide as a country to be shapers of the future as opposed to takers,” he said. “And we are running the risk now of being takers of what the world will give us.”

While they stopped short of revealing the panel’s final recommendations, which will appear in the spring report, Ms. Zvan and Mr. Chisholm said companies need to face clearer guidelines for disclosure related to sustainability, saying investors are increasingly unhappy with the level of existing effort. At the same time, regulators should assess whether companies are living up to existing obligations to disclose material risks to investors.

Ms. Zvan said Canada already has a challenge in attracting global capital due to its small size and image as a carbon-intensive economy. “We need to talk about the work that is happening to lower our carbon footprint,” she said. 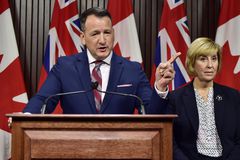