The federal government named a special mediator Wednesday in hopes of ending rotating walkouts at Canada Post Corp. that forced closure of the Crown corporation’s biggest sorting plants for a second day and spread to the West.

Labour Minister Patty Hajdu announced the appointment of Morton Mitchnick just hours after the Canadian Union of Postal Workers (CUPW) said it would keep its members on the picket lines in the Greater Toronto Area.

Ms. Hajdu said in a statement that Mr. Mitchnick, a former chair of the Ontario Labour Relations Board, is a highly respected senior arbitrator and mediator. She said he will be joining a team of federal mediators from the Federal Mediation and Conciliation Service that have been working with the two parties.

Ms. Hajdu said she hoped the new mediator would “bring a new perspective to the negotiating table.”

“There are still a number of challenging issues that both parties have to work through, and having sometimes a fresh set of eyes on a challenging problem like that will help the parties to continue to look for creative solutions,” the minister said after meeting with her Liberal caucus colleagues early Wednesday.

Nearly 9,000 CUPW members walked off the job in the Toronto region early Tuesday as part of rotating walkouts that began Monday to back contract demands. They remained on picket lines Wednesday and were joined by roughly 250 postal workers in Kelowna, B.C. who joined the walkout at 6 a.m. local time, Canada Post confirmed.

Calgary was named as the third location for the rotating strike, with workers walking off the job at 6 p.m. MT on Wednesday, CUPW said.

The job action at the giant Gateway parcel facility in Mississauga, Ont., which processes roughly two-thirds of all parcels mailed in Canada, and the South Central mail plant in the Toronto’s east end, forced delays in shipments of tens of thousands of letters and parcels across the country.

Those delays were expected to continue Wednesday, although Canada Post said it would do what it could to deliver mail and parcels outside Toronto.

“Customers across the country should expect to see delays for parcel and mail delivery,” said Canada Post spokesman Jon Hamilton, adding the agency continues to operate across the rest of Canada and is accepting and delivering mail and parcels in all other locations.

The union has said the walkouts will continue until Canada Post sweetens its contract proposals for rural and urban carriers.

The union and postal service have been unable to reach new collective agreements for the two bargaining units in 10 months of negotiations.

On Monday, walkouts shut down postal operations in Victoria, Edmonton, Windsor, Ont., and Halifax, causing few delivery disruptions outside of those cities.

CUPW, which represents 50,000 postal employees, said Wednesday that it would work with the special mediator, as well as Peter Simpson, director general of the federal mediation service, in the hope of achieving new collective agreements.

The union has called on Canada Post to address issues stemming from the explosive growth of parcel deliveries, including health and safety concerns and precarious work.

The agency said Tuesday it has made overtures to the union with the aim of mitigating some of those concerns.

But a big issue for CUPW is the perceived overuse of temporary workers.

The union wants Canada Post to provide greater job security through the creation of more full-time positions, arguing that temporary workers are consistently paid less, are not covered by health, dental and sick or disability insurance plans, have no guaranteed hours and cannot plan their futures. 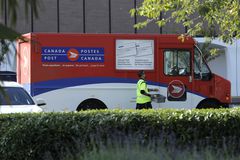