Ottawa is ready to make concessions to the Trump administration on Canada’s protected dairy market in a bid to save a key NAFTA dispute-settlement system, preserve safeguards for cultural industries and avert tougher pharmaceutical patent protections, The Globe and Mail has learned.

That compromise could end the year-old talks, but at a heavy cost. The federal government has committed more than $4-billion to the country’s dairy farmers to buy the lobby’s acquiescence on concessions in previous trade deals.

And the concession may be not enough. Canada tried to offer the United States more dairy market access in May as part of a North American free-trade deal, only to be rebuffed.

Foreign Minister Chrystia Freeland and a team of senior Canadian officials – including Prime Minister Justin Trudeau’s principal secretary, Gerald Butts, and NAFTA czar Brian Clow – arrived in Washington on Tuesday in a bid to reach a deal on the trade pact by the end of the week.

A day earlier, the United States and Mexico unveiled a tentative deal negotiated without Canada as part of a U.S. strategy to finish NAFTA talks. The United States is demanding Ottawa sign on to the agreement by Friday and threatening to ditch NAFTA for a bilateral pact, leaving Ms. Freeland a short window to negotiate changes.

“Our position from the outset has been that we hope for the best but we are always prepared for all scenarios,” she told reporters after an hour-long meeting with U.S. Trade Representative Robert Lighthizer and Jared Kushner, U.S. President Donald Trump’s son-in-law, on Tuesday afternoon.

Sources with knowledge of Canada’s strategy said Ottawa will try to deal on dairy in exchange for compromises from the Trump administration on other areas. Canada’s dairy, egg and poultry sectors operate under supply management, a system of quotas and tariffs that protect Canadian producers from foreign competition by charging levies of up to 275 per cent on imports.

Mr. Trudeau told a business luncheon in Montreal on Tuesday that Canada hopes to sign a deal as long as it is good for the country. “Our position on defending supply management has not changed,” he said. "We will defend supply management.”

Canada’s plan is not to dismantle the supply management system entirely, the sources said. Rather, Canadian negotiators will agree to change one rule that effectively blocked American farmers from exporting ultrafiltered milk, an ingredient in cheesemaking, to Canada and also offer the United States a percentage of the Canadian dairy market.

In return, Canada wants to keep Chapter 19, which allows the countries to challenge each others’ punitive duties at binational trade panels. The system has been an important safeguard for Canadian softwood lumber against U.S. tariffs. Mr. Lighthizer on Monday told reporters that Mexico had agreed to his demand to abolish the chapter in the new deal.

One Canadian official said Ottawa is also pushing to keep current trade provisions that allow it to protect cultural industries, including television and radio, from American competition.

The first official said that Tuesday’s discussions with Mr. Lighthizer were optimistic and there was a willingness from the Americans to compromise. Mr. Lighthizer went out of his way to praise Ms. Freeland and let her know that he respects her, after media reports that he did not like her, the official said.

Mr. Trump has repeatedly attacked Canada’s protected dairy market, starting in the spring of last year when he met dairy farmers in Wisconsin hurt by the ultrafiltered milk rule.

Canada has previously been willing to make a concession on the matter. In May, Canadian officials offered the United States a rush deal on NAFTA that involved agreeing to all American demands on the auto sector, plus granting American farmers more access to the Canadian dairy market, people in government and industry familiar with the deal-making have told The Globe. Some U.S. officials – including Treasury Secretary Steve Mnuchin, economic adviser Larry Kudlow and Mr. Kushner – were inclined to take the deal. But Mr. Lighthizer shot it down, the sources said.

Such concessions may not come cheap. After signing the Trans-Pacific Partnership and a trade deal with the European Union, which combined gave up about 10 per cent of Canada’s market share to foreign farmers, the federal government offered billions in compensation to Canadian farmers.

Defenders of supply management point out that the United States engages in agriculture protectionism by doling out billions of dollars’ worth of subsidies to farmers.

Despite the supply management system, Canada imports more American dairy products than it exports to the United States, even though the American market is 10 times the size of Canada’s. Canadian imports of U.S. dairy totalled $470-million last year, compared with $149.5-million in exports.

The increasing access to dairy being offered to countries as part of trade agreements risks diluting its value, its supporters say.

“This is like death by a thousand cuts,” said Bruce Muirhead, a professor at the University of Waterloo. “At what point is supply management so compromised by the amount of market share that we’ve given up for one reason or another that the system doesn’t work any more?”

Other Canadians, including former Saskatchewan premier Brad Wall, have accused supply management of artificially raising consumer prices, suggesting Mr. Trudeau might find at least some support for weakening it.

Bruce Heyman, a former U.S. ambassador to Canada, said Ms. Freeland could use the tight timeline to her advantage.

“The U.S. really wants a deal. Mexico really wants a deal. Congress really wants Canada to stay in the deal. Canada has an opportunity in the next three days,” he said in an interview. “If Canada walks in and says, ‘Here are the three things that are no-go zones, can we work out a compromise?’ and the U.S. is willing to talk, a deal is entirely possible.”

If Ms. Freeland fails to reach a deal this week, Mr. Trump would have to decide whether to keep negotiating or make good on his threats to bring down auto tariffs and shred NAFTA. Both moves could provoke a battle with Congress and the U.S. business community, which favour keeping current trade arrangements intact.

Laura Dawson, director of the Canada Institute at the Wilson Center think tank in Washington, said much will depend on whether Ms. Freeland can co-ordinate her negotiating strategy with American businesses and legislators in a common front.

“If Canada is out in the wilderness on the things it is advocating, President Trump may roll the dice and put a bilateral deal before Congress,” she said. “But if there are concerns shared by Canada and the U.S. business community, these talks could extend into next week.” 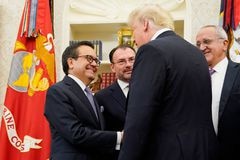 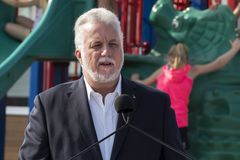 Follow Adrian Morrow, Robert Fife and Eric Atkins on Twitter @adrianmorrow @RobertFife @ericatkins2
Report an error Editorial code of conduct
Due to technical reasons, we have temporarily removed commenting from our articles. We hope to have this fixed soon. Thank you for your patience. If you are looking to give feedback on our new site, please send it along to feedback@globeandmail.com. If you want to write a letter to the editor, please forward to letters@globeandmail.com.
Comments