Canadian and American negotiators were bargaining through the night in pursuit of a North American free-trade deal before the Friday deadline set by U.S. President Donald Trump, separating into working groups to address key disagreements, including the dispute-resolution mechanism at the heart of Ottawa’s bargaining position.

Both Mr. Trump and Foreign Minister Chrystia Freeland said talks this week have made progress and said a deal could be had by the end of the week.

Canada has offered to give American farmers more access to its protected dairy market in exchange for the United States preserving a key dispute-settlement mechanism, keeping safeguards for cultural industries in the deal and averting tougher rules for pharmaceutical patents, sources have told The Globe and Mail.

A senior Canadian official said late on Wednesday the two sides are still far apart on Chapter 19, the process Canada has used to fight back against punitive American tariffs on imports, and provisions that allow Ottawa to protect Canadian culture from U.S. competition.

Still, the official said negotiators believe there is a real chance talks will wrap on Friday with a trilateral deal. Negotiators have broken into teams to focus on Chapter 19, cultural matters, intellectual property and dairy, the source said.

Ms. Freeland met twice with U.S. Trade Representative Robert Lighthizer on Wednesday and planned to meet with him again at 9 a.m. on Thursday.

“I feel that both parties are coming to this stage of the negotiation with a lot of goodwill,” she said outside Mr. Lighthizer’s office. “We’re looking to find compromises.”

“Canada very much wants to make a deal and I think it’s going to be, obviously, very good for Canada if they do,” he said at the White House. “We gave until Friday and I think we’re probably on track. … I love Canada.”

The United States and Mexico unveiled a new trade agreement on Monday, which Mr. Trump wants to present to the U.S. Congress by the end of the week to trigger a 90-day notification period. The aim is to have the pact ready for Mexican President Enrique Pena Nieto to sign before he leaves office on Dec. 1.

The U.S. President has threatened to cut Canada out of the continental trade block and impose 25-per-cent auto tariffs if Canada and the United States cannot come to an agreement. But he has faced pushback from his own Republican Party, which argues he only has a mandate to renegotiate the North American free-trade agreement, not tear it up in favour of a bilateral pact with Mexico.

“NAFTA was a tri-party agreement only made operative with legislation enacted by Congress,” Senator Pat Toomey of Pennsylvania said in a statement. “Any change, such as NAFTA's termination, would require additional legislation from Congress.”

Prime Minister Justin Trudeau’s office announced a Thursday afternoon call between Mr. Trudeau and the premiers and territorial leaders, which will also include Ms. Freeland. The move could be an attempt to preserve a unified front as Canada prepares to make trade-offs in the talks.

Quebec, for instance, is in the middle of a provincial election. The province has both a powerful dairy lobby and a strong attachment to its cultural sector, both of which are hot-button NAFTA issues.

Ontario, for its part, stands to benefit from new NAFTA auto rules that will tamp down investment in Mexico in favour of manufacturing plants in Canada and the United States. And Alberta’s oil companies will continue to benefit from investor protections in the United States and Mexico that Washington initially tried to drop from the pact before backing down in talks with Mexico.

Mr. Trudeau said on Wednesday there was a deal to be had, but warned that Canada would not be pressured into accepting a bad one.

“We recognize that there is a possibility of getting there by Friday, but it is only a possibility, because it will hinge on whether or not there is ultimately a good deal for Canada,” he told reporters in Northern Ontario. “No NAFTA deal is better than a bad NAFTA deal.”

U.S. Commerce Secretary Wilbur Ross had imposed the tariffs in January to protect an American paper mill from Canadian competition. But the U.S. newspaper industry revolted, arguing it was being pushed to the brink of bankruptcy by newsprint prices made needlessly high by the tariffs.

In its unanimous ruling, the ITC determined the U.S. forestry industry “is not materially injured” by Canada’s paper imports.

Mr. Trudeau pointed to the trade action as proof Canada must preserve Chapter 19. If the ITC had ruled in the Trump administration’s favour, Canada’s best recourse would have been to invoke Chapter 19 and get the matter settled by a binational trade panel. Chapter 19 panels have been successfully used in the past to challenge U.S. tariffs on Canadian softwood lumber.

Ottawa is hoping to keep Chapter 19 in a trade-off that would offer U.S. farmers a percentage of the Canadian dairy market, and also change a rule that has made it difficult for American producers to sell ultrafiltered milk, a cheese-making ingredient, into Canada. The dairy compromise, however, would stop short of dismantling supply management, the protectionist system that guarantees returns for Canadian dairy farmers through a system of quotas and tariffs up to 275 per cent on imports.

Ms. Freeland repeatedly cheered Mexico’s largest concession, which will see North American automakers obliged to source 40 per cent to 45 per cent of their content from factories paying at least US$16 an hour. Such a rule would make it harder for Mexico to compete with Canada and the United States for auto jobs by offering rock-bottom wages.

“Our workers have been concerned for a long time … about the way trade agreements can hurt blue-collar workers in high-wage countries,” she said. 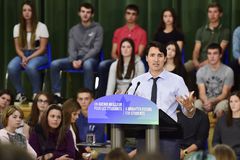 Why I’m skeptical of the latest Canadian dollar rally: This trade deal is all about America first
Subscriber content
August 29, 2018 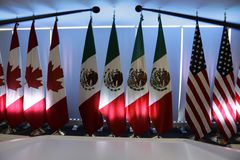 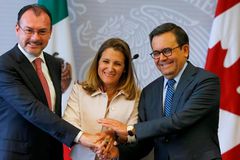