Harnessing the wind and sun have rapidly become two of the cheapest options for generating renewable energy. But winds vary from hour to hour, and the daily duration of sunlight changes with the seasons – something Canada’s electricity grids weren’t designed to accommodate.

The federal government is eager to solve that problem. This fall, the Canada Infrastructure Bank (CIB) announced plans to invest $2.5-billion over the next three years, part of it earmarked for new transmission infrastructure intended to foster increased co-operation between provinces on clean energy. The plans came at the urging of senior executives at large companies such as Suncor Energy Inc. Suncor Energy Inc., BASF SE BASF SE and Stantec Inc. Stantec Inc., all of which endorsed a report containing a lengthy wish list of investments. Those investments included federal money for new infrastructure to facilitate greater electricity transfers between Ontario and Quebec, British Columbia and Alberta, and Manitoba and Saskatchewan.

If it succeeds, the CIB’s enticement could remake Canada’s transmission grids, which today follow a distinct north-south orientation. The reasons for this are rooted in the country’s history, geography and politics, but can be distilled to this: Canadian utilities have generally found trading with Americans more rewarding than doing so with neighbouring provinces.

Is the renewable energy revolution strong enough to overcome old habits? The Canada Energy Regulator, which replaced the National Energy Board in 2019, appears to think so. In its latest projections published in late November, the CER forecast interprovincial transfers could increase significantly over the next 10 years, from roughly 50 terawatt hours in 2019 to slightly more than 60 TWh by 2030 before beginning a gradual decline. That’s a change from last year’s projections, which envisioned interprovincial transfers remaining largely flat over the next 20 years.

Martin Imbleau has a vision. The setting: New York City’s Times Square. The year: 2025. “We look at the picture at Times Square, and it says: ‘Manhattan is being fed by clean energy coming from Quebec.’ ”

It’s not an unusual dream for a man who joined Hydro Quebec just six months ago as head of export initiatives. For the past couple of years, the utility has aspired to become “the Battery of the Northeast” – a vision shared by its political masters, the government of Quebec.

The idea, in short, is to use the utility’s hydroelectric dams and reservoirs as reliable bulwarks to help neighbours across northeastern North America cope with the intermittency of their wind and solar generation facilities. When those intermittent sources are idle, Quebec could send power to its neighbours. And if they’re going strong, it could accept power from them while storing water for later.

“The battery requirements for New England and New York are humungous,” said Mr. Imbleau, vice-president of corporate strategy and business development. Given New York’s ambitious goals to reduce greenhouse gas emissions, he adds, “we feel there’s no other way around but to count on new infrastructure, and hydropower, to balance their system.”

Quebec’s hydroelectric dams provide some of the cheapest power to be found anywhere on the continent. According to estimates released in October by the C.D. Howe Institute, in 2018 Quebec had the lowest normalized system costs of power of any province at $70 per megawatt hour, roughly half of the $143/MWh cost in neighbouring Ontario.

Quebec has exported surplus power for decades. Last year, its net exports totalled 33.7 TWh, down slightly from the record set the previous year. That accounted for 16 per cent of its total sales.

Céline Bak, president of consultancy Analytica Advisors, said the prospects for the “Battery of the Northeast” concept depends on how fast the region moves to intermittent renewable generation. “To the extent that they [pursue] decarbonization of the grid, the need for battery will be greater,” she said, “and that will create an opportunity for Hydro Quebec.”

Recently, the wind has been blowing in Hydro Quebec’s direction – at least in the U.S., where it has signed major contracts with Massachusetts and other New England states, and secured crucial permits.

Similar to other Canadian provinces, Quebec's

It exports far more electricity to the United States than to Ontario and New Brunswick.

Similar to other Canadian provinces, Quebec's

It exports far more electricity to the United States than to Ontario and New Brunswick. 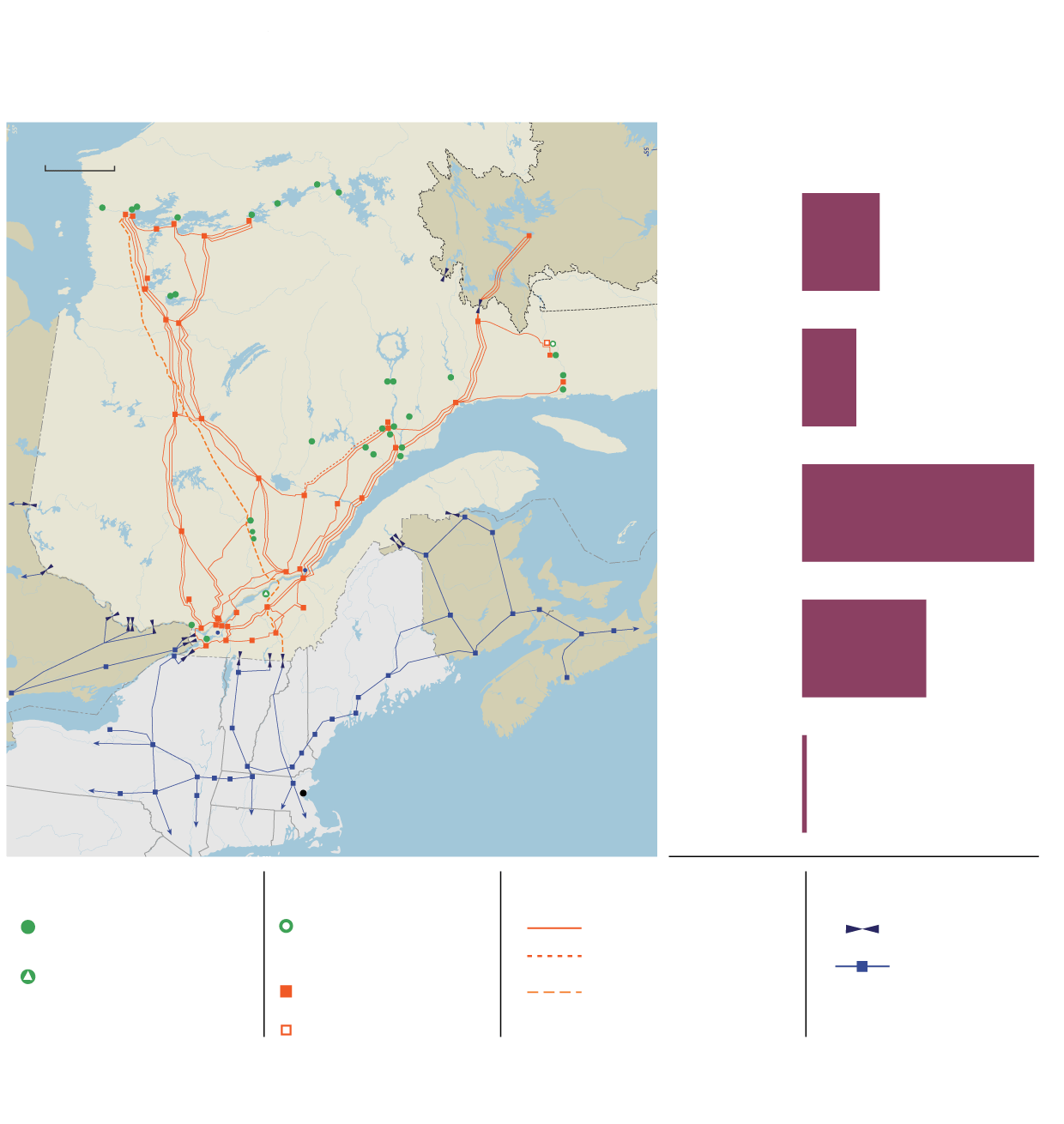 south. It exports far more electricity to the United States than to Ontario and New Brunswick.

But things haven’t worked so well closer to home. Quebec has made several overtures to Ontario in recent years, with lukewarm results. Seven interties already exist between the two provinces. (An intertie is an interconnection that allows transfers between different electric utility systems.) But most have limited capacity and are widely regarded as underutilized.

Theoretically, the two provinces could be ideal partners. Ontario is unique among provinces in that electricity consumption peaks in summer as people crank their air conditioners to beat the heat. Quebec peaks in winter, when residents turn up their electric heat.

Some environmental groups regard Quebec as a silver-bullet solution for Ontario’s electricity troubles. The Ontario Clean Air Alliance, for instance, wants the province to phase out its natural-gas-fired power plants and halt nuclear refurbishments. It says Quebec could supply electricity at rates far cheaper than refurbished nuclear reactors.

“Quebec can provide us with very secure, very low cost power for the long term,” said Jack Gibbons, the organization’s chair. “And if we’re looking at electricity power planning from the perspective of consumers or the environment, there is no good reason why we don’t integrate our power grid with Quebec.”

But that would likely require upgrading interties, which can be expensive. A 2014 estimate by Ontario’s Independent Electricity System Operator (IESO) figured that upgrading just one of them, the Hawthorne-Merivale intertie, would cost up to $325-million and take as long as five years.

Such costs must be weighed against alternatives, such as the Ontario government’s enthusiasm for building new nuclear reactors and refurbishing existing ones. In 2017, the Financial Accountability Office weighed those alternatives and concluded that large-scale imports from Quebec were not cost-competitive with nuclear generation.

Allan Fogwill, CEO of the Canadian Energy Research Institute, said Ontario also has considerable potential to develop its own small hydro projects, and natural gas prices are so low that it’s yet another viable option for “firming up” wind.

The pattern of limited interprovincial co-operation is evident across the country, with notable exceptions. The flow of electricity from Labrador’s Churchill Falls project into Quebec is by far the largest interprovincial arrangement. More recent examples include the Maritime Link, which connects Newfoundland and Labrador to Nova Scotia, and a transmission line under construction between Saskatchewan and Manitoba, called the Birtle to Tantallon Power Line Project, which will facilitate Saskatchewan’s increased purchases of hydroelectricity from Manitoba Hydro.

More typically, though, provinces have evolved as their own private electricity fiefdoms. The single intertie between Alberta and British Columbia, for instance, has been chronically underused. The Alberta Electricity System Operator acknowledges the province is “one of the least interconnected systems in North America.”

This is partly explained by geography. One consequence of Canada’s sheer size and relatively low population density is that its power plants are often closer to major U.S. demand centres than they are to cities in neighbouring provinces. Many of Canada’s large hydropower plants were built, at least in part, to meet U.S. demand.

“Provincial utilities did what was the rational thing: They followed the money,” said François Bouffard, a professor at McGill University’s electrical engineering department.

Electricity generation falls largely under provincial jurisdiction, and all provinces pursued self-sufficiency as they built their electricity systems. They were wary of buying large amounts of electricity from neighbouring provinces, lest they be accused of subsidizing electricity rates elsewhere. Though weakened, these impulses remain.

It needn’t necessarily be so. While the immediate prospects for greater integration between Ontario and Quebec seem dim, other provinces may have stronger and more immediate reasons to partner up.

In contrast with Ontario and Quebec, Alberta and Saskatchewan have relied heavily on fossil fuels to generate electricity. That includes coal, which many governments aim to phase out entirely. Leaning on nearby provinces for cleaner energy sources is one option. Burning more natural gas to generate their own electricity is another.

The southern parts of Alberta and Saskatchewan also happen to possess abundant wind and solar resources. New or improved interties could facilitate access to broader markets, enabling these provinces to build more generation facilities and increase their export revenues.

Ms. Bak said new transmission infrastructure between Alberta and B.C. is best poised to take advantage of the CIB’s offer. But, even here, the lure of the U.S. market looms large.

“If there were an [improved] intertie structure between Alberta and British Columbia, that would build out even more confidence because it would create a pathway to California and other U.S. markets.”

Editor’s note: This article has been updated to fix the title of the Ontario Clean Air Alliance.