The Canadian economy is headed into a much deeper hole in the second quarter than bank economists previously anticipated, as they scramble to slash their forecasts in the face of the unprecedented shutdowns from COVID-19.

However, they predict that a dramatic rebound is in store once lockdowns and closings are eased in the months ahead, aided by huge government programs aimed at supporting the economy and aiding businesses and consumers.

New projections by Canada’s major banks predict that second-quarter GDP will shrink at an annualized rate of roughly 20 per cent to 30 per cent – more than double the pace of contraction that the banks had projected only a week ago. Widening lockdowns, closings and social-distancing measures have substantially amplified the economic fallout for which the forecasters had already been bracing.

But the banks see the economy roaring back as soon as the shutdowns are reversed, flipping the switch on an economic light that will be further brightened by billions in added government spending. Some projections have gross domestic product rebounding by 30 per cent to 40 per cent in the third quarter, on the assumption that locked-down sectors will be allowed to return to work by then.

“Much as the downturn is like nothing we’ve seen before, I suspect the recovery is going to be like nothing we’ve seen before,” said Bank of Montreal chief economist Doug Porter, whose new forecasts, to be released Friday, predict about a 25-per-cent annualized rate of contraction in the second quarter, followed by a 30-per-cent bounce-back from those depths in the third quarter.

“Because we’ve made much more dramatic assumptions in terms of the shutoff, we also think that the restart will be almost as dramatic the other way.”

But economists say that even a strong recovery in the second half of the year won’t be enough to reverse all of the damage inflicted by COVID-19, which is widely expected to send the entire global economy into recession this year. The banks predict that GDP will shrink by anywhere from 2.5 per cent to 5 per cent for 2020 as a whole, before returning to growth of about 3 per cent to 5 per cent in 2021.

The optimism for the rapid third-quarter bounce-back – what economists call a V-shaped recovery, describing the shape of the line on a chart of the quarter-by-quarter economic growth pattern – hinges on the COVID-19 measures being lifted or at least significantly eased in the next couple of months. Should the enforced shutdowns continue much beyond that, they say, the prospects for recovery will face more serious obstacles.

“The longer you shut down the economy, the more likely you are to see the permanent destruction of capacity,” said Stéfane Marion, chief economist at National Bank of Canada, as many businesses may not survive a long-term closing.

On Thursday, National Bank released the most dire second-quarter forecast to date among the Canadian banks, projecting a 32-per-cent annualized rate of contraction. On a non-annualized basis, that’s an 8-per-cent slump from the first quarter to the second – nearly quadruple the worst quarter of the 2009 Great Recession.

Mr. Marion said the dismal outlook stemmed significantly from Ontario and Quebec orders to shut down businesses deemed nonessential – which detailed which sectors would be forced to go idle in the country’s two biggest provinces.

“We’ve never seen a shock of this magnitude," he said. “This is not your usual recession, where every industry is operating at some capacity. Right now, there are some industries operating at zero.”

With the shutdowns already resulting in nearly a million new filings for Employment Insurance benefits as of the beginning of the week, economists are bracing for a spike in unemployment to go along with the dramatic slump in economic activity. The Canadian Centre for Policy Alternatives predicted that the unemployment rate is likely headed for about 14 per cent, from 5.9 per cent in February, based on the number of workers its research has identified as either already laid off or "at immediate risk.”

Again, economists see jobs coming back as businesses are restarted, with unemployment projected to drop to between 6 per cent and 7 per cent later in the year.

The rapid changes in the COVID-19 situation, and in government responses both on the health front and in terms of aid programs, have forced economists to tear up and rewrite their forecasts at an unheard-of pace this month, with forecasts often looking outdated after only a few days.

“The kind of changes we’re talking about on a week-by-week basis are probably bigger than we would make in a year,” BMO’s Mr. Porter said. “The reality is that the information was changing on a day-by-day basis. Each time we would adjust the forecast in a week, we’d probably absorb about five different major events.”

The key to how well these latest forecasts hold up now lies in how long the enforced shutdowns last – whether it’s several weeks or, as some still fear, several months.

“A shift of one quarter in the resumption of normal operating conditions can have a large impact on growth outcomes,” Bank of Nova Scotia chief economist Jean-François Perrault said in a research note. 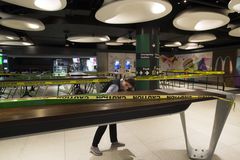