Canada’s home sales jumped 15.5 per cent in September compared with last year, with rising activity and record prices in Toronto and its surrounding suburbs adding to affordability concerns that have become a focus in the federal election campaign.

Sales activity grew 21 per cent in the Toronto region and 45 per cent in the Vancouver area, underpinning the year-over-year increase to 41,819 home sales nationwide, according to a report from the Canadian Real Estate Association (CREA). It’s the seventh straight month that the country’s home sales have grown after hitting a six-year low in February, in part due to tougher mortgage requirements and a tax on foreign purchases of real estate in Vancouver and Toronto.

As sales activity has increased across the country, so have prices. CREA’s composite benchmark home price, an industry representation of the typical home sold, which includes detached houses, townhouses and condos, climbed slightly more than 1 per cent to $629,200 in September, compared with last year.

In the Toronto region, which includes the city and its outskirts, the benchmark home price was up 5 per cent to a record high of $806,700. In the Greater Vancouver Area, prices were down 7 per cent to $986,500, year over year, but were higher than in August, suggesting the market is rebounding from the B.C. government’s anti-speculation policies.

High housing prices became an issue early in the campaign for next Monday’s federal election, with all major parties promising to improve affordability, particularly for first-time buyers.

Nik Nanos, founder and chief data scientist of Nanos Research, said housing continues to be a major issue in the suburban Toronto and Vancouver areas.

“Housing affordability is definitely on the radar for voters, especially in those two regions which are in play, and also just have a tougher housing market,” he said.

Sales activity and prices are especially strong around Toronto, the CREA data indicate.

“We have a situation where those areas are becoming unaffordable,” said Benjamin Tal, deputy chief economist at CIBC. Even in Vancouver, Mr. Tal said: “The fact that prices went down [compared to 2018], doesn’t mean that it became affordable.”

Home prices in the southwestern Toronto suburbs have reached a record high. The price of a detached house in the Hamilton-Burlington region reached $656,300 last month. In Niagara, the price was nearly $450,000.

“If you have your heart set on buying a home, but you can’t afford or qualify for a mortgage financing in an area that you would most like to, you look at your second best. For that reason, people are driving further afield to places where they can qualify for financing,” CREA’s chief economist Gregory Klump said.

Investors are also fleeing to the suburbs, and that interest is contributing to housing boom outside Toronto.

“They are now moving funds into the St. Catharines and Niagara market,” said Brian Hogben, a mortgage broker who serves the Hamilton area. “The upswing potential is still quite large.”

The federal Liberals have proposed expanding a first-time home buyer plan to make it easier for people to buy in the expensive cities of Victoria, Vancouver and Toronto. Currently, Ottawa provides an interest-free loan of up to 10 per cent of the down payment, with a cap on the price.

The Conservatives and the New Democratic Party are proposing to extend the possible amortization period for an insured mortgage to 30 years from 25.

The Conservatives have also proposed to change the test that requires borrowers to prove they could handle home loan payments at a higher rate. It is unclear how they would change the test, which reduced the size of mortgages buyers could get.

Some critics have warned that measures to improve affordability such as lengthening the amortization period could push home prices higher and exacerbate the crisis.

“Lowering monthly mortgage payments by stretching repayment over a longer time period looks great on the surface, yet a surge in new buyers could cause prices to escalate, erasing the enhanced purchasing power,” Phil Soper, president of realtor Royal LePage, said in a recent press release.

In addition to Toronto and Vancouver, sales transactions were up in Calgary, Edmonton, Winnipeg, Ottawa and Montreal. 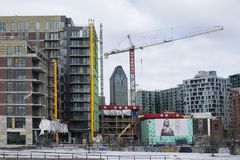