Courtesy of Trevor Tombe, an associate professor at the University of Calgary, the map shows the amount of economic output, or gross domestic product (GDP), generated per person in each Canadian province and U.S. state. It incorporates fresh data on 2018 provincial economic accounts published last week by Statistics Canada.

One observation that leaps out is Canada’s massive productivity gap versus the United States. When figures are adjusted for the different price levels in each country and translated into U.S. dollar terms, even Canada’s most prosperous provinces are also-rans. 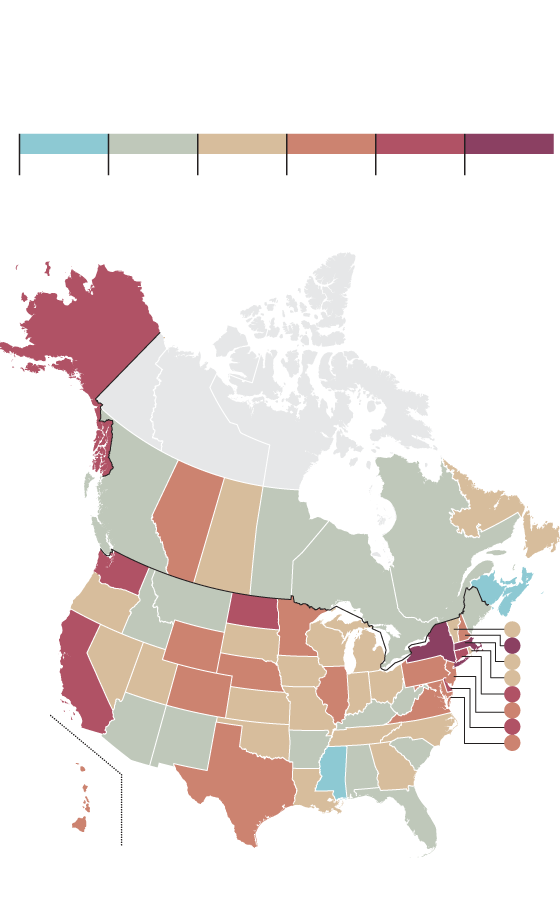 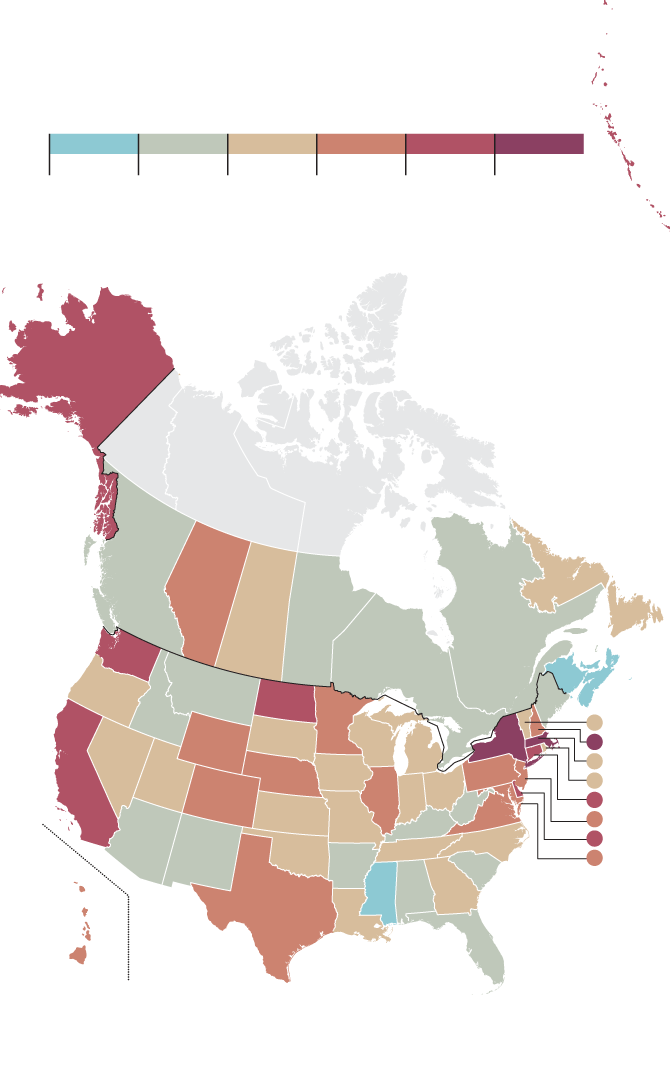 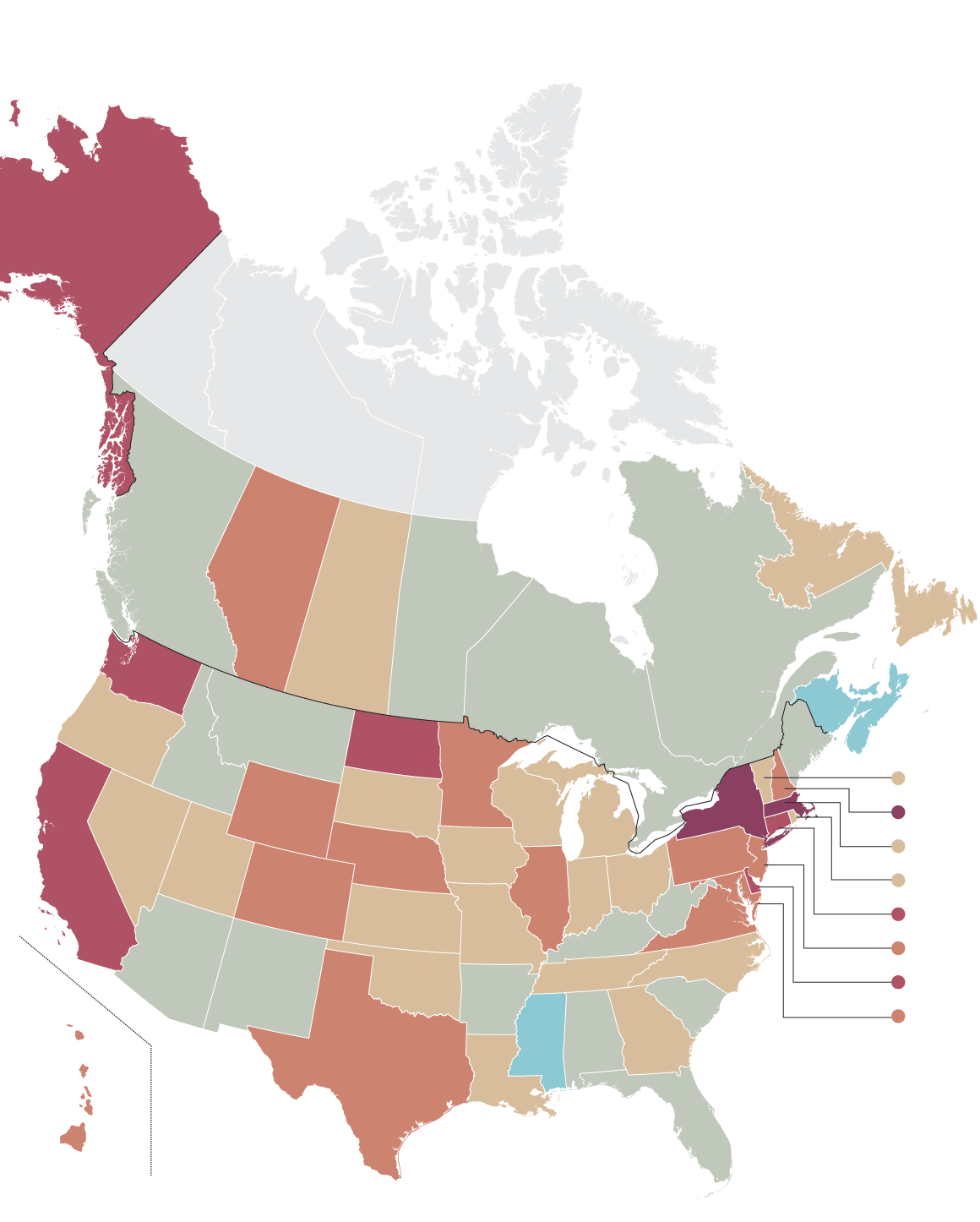 Output per person in Alberta, Canada’s richest province, languishes far behind that in California or New York. It can’t even keep pace with the level in Minnesota.

The productivity gap between the two countries is not a new phenomenon, Prof. Tombe stresses. It has been evident, to some degree, since data began in 1950. But since hitting a low near 15 per cent in 2014, the productivity gap has been steadily expanding and now stands at 22 per cent. That, in large part, reflects the slowdown in Alberta’s oil patch.

The widening productivity gap is putting renewed pressure on policy makers to come up with ways to boost Canadian output. But finding answers is easier said than done.

One challenge is growing regional tension. As the map makes clear, despite the oil sector’s woes, Alberta’s productivity still vastly outstrips that of other parts of the country. It produces nearly 70 per cent more GDP per person than do the Maritime provinces, and roughly a third more than Ontario.

These disparities are generating a lot of political heat. Many Albertans think the province is being unfairly held back by federal government policies while being asked to shoulder an unreasonable portion of the country’s fiscal load.

The map helps demonstrate why the rest of the country may not agree. Even with clouds over the oil patch, Alberta’s per capita GDP of US$64,000 still leaves every other part of Canada in the dust.

Stepping back and looking at things in a continental perspective offers some interesting comparisons. For instance, Alberta’s per capita output looks remarkably similar to the US$62,000-a-person output of Texas, another major oil-producing region. Despite its battles with Ottawa over pipelines and carbon taxes, the province seems to be holding its own with its southern counterpart.

A continental perspective also reveals disparities between U.S. regions that are just as large as, or larger than, those in Canada. GDP per person in New York State, for instance, is more than twice as large as in Mississippi.

“There are many federal policies, both in Canada and the U.S., that aim to narrow regional gaps,” Prof. Tombe says. “The reason those policies exist is because there are higher income regions and lower income regions. … As much as we in Alberta complain about equalization programs and things of that nature, they are not something unique to Canada.”

So what can Canadian policy makers do to narrow Canada’s productivity gap and, ideally, help ease some of those regional gaps as well? Pipeline policy has a role to play, but it is only part of the answer. Trade agreements, innovation incentives and tax reform are also likely to be needed if Canadians want to see a better looking map in future.