Canada’s oil industry faces deep cuts in production in the coming days as demand for fuel dwindles and crude gushes into limited storage capacity, heaping more financial pressure on companies and governments as they hammer out a rescue plan.

Companies will have to reduce output by as much as 11 per cent by April as tanks fill up, according to one estimate.

Gasoline, diesel and jet-fuel consumption has plunged as ground and air transport slows to a fraction of normal traffic in Canada and the United States because of the COVID-19 pandemic. This has pushed crude oil and refined product prices well below break-even levels.

Western Canadian oil production will have to be reduced by about 440,000 barrels a day as available storage capacity within the region gets filled up, Oslo-based research house Rystad Energy said. Canadian capacity is about 40 million barrels, and Rystad estimated that supplies could near that volume by the end of this month at current production rates.

“Those are numbers we think need to come off line in any case," Rystad senior analyst Thomas Liles said. "That could, of course, happen from a policy point of view. It could happen from a corporate point of view as a response to the price. There’s also the possibility that it could happen as the result of staffing issues due to COVID-19 spread. All three of those things are factors.”

Canada’s oil industry has come under severe strain, and the prospect of shutting down output adds urgency to an expected multibillion-dollar rescue package from Ottawa. Unless the government acts, industry experts have predicted mass layoffs in a sector that employs tens of thousands.

Opinion: The coronavirus-induced economic hiatus is a reckoning for Canada’s oil and gas sector

The global oil market has been hammered this month by an economic slowdown and a price war between major producers Saudi Arabia and Russia. Canada’s storage situation mirrors that across the continent. U.S. crude prices are down 60 per cent since the start of the year, and West Texas Intermediate (WTI) settled at US$24.49 a barrel on Wednesday. Western Canada Select heavy oil blend was priced at US$8.84 a barrel, according to NE2 Group.

With economic pain spreading, U.S. Secretary of State Mike Pompeo urged Saudi Crown Prince Mohammed bin Salman on Tuesday to “rise to the occasion” and bring stability back to oil and financial markets that are reeling because of the novel coronavirus and resulting pandemic.

Federal Finance Minister Bill Morneau told a Senate hearing Wednesday that aid for the energy sector is on its way. “I’m not talking about weeks, I’m talking about hours, potentially days,” he said.

The initial focus will be credit support for small and medium-sized companies, and the government is also examining how it can support large producers dealing with the punishing market conditions, he said.

With access to credit key, one proposal would see Ottawa providing a backstop for banks that lend to the oil industry, rather than providing direct loans, an industry source said. The Globe and Mail is not identifying the source because they were not authorized to speak publicly on the matter. Such an arrangement is preferable, the source said, because each company’s needs, debt structure and lending syndicate is different, and new government loans could trigger defaults.

Mr. Morneau said his government has been in hourly contact with the energy sector to gauge its most formidable challenges, and is speaking with energy-producing provinces daily to fully understand the hit to their balance sheets.

Both the federal and Alberta governments are devising a series of measures to help the industry deal with the crisis. Alberta has already announced that it will waive fees collected by the provincial regulator from the industry, and extend oil and gas leases by one year, to give resource companies more time to raise capital and plan ahead.

Jackie Forrest, senior director of research at ARC Energy Research Institute in Calgary, said Canada should reduce daily production by as much as one million barrels with a storage crunch expected in the next few weeks.

Oil sands output was cut by that much in 2016 as wildfires ravaged the Fort McMurray, Alta., area. That showed short-term shutdowns can happen quickly, she said. Long-term closing of oil-sands facilities can put those assets at risk of corrosion and other damage, though projects can be turned down rather than off in some cases.

“Ideally you [companies] prepare for this. You start thinking through these scenarios now because there’s a very real potential that we will have to see some of the production be curtailed,” she said.

The situation is similar around the world as airlines have grounded much of their fleets and as people put the brakes on commuting to work by car. RBC Capital Markets estimates that global oil demand will fall this year by eight million to 11 million barrels a day, with U.S. gasoline a key factor.

RBC said its analysis of GPS data showed traffic congestion in major U.S. cities has dropped by 75 per cent. The U.S. is Canada’s main market for crude – it exported 4.1 million barrels a day there in December, according to the U.S. Energy Information Administration.

Alberta oil production is already constrained by the provincial government, which imposed curbs in January, 2019, to deal with limited export pipeline capacity and a wide spread between WTI and WCS. Premier Jason Kenney said this month that the province would impose deeper curbs on production if needed to “ensure a survival price” for oil and gas companies, but as yet has not mandated such a measure.

The situation is exacerbated by the low WCS price, which makes moving any crude out of Canada by rail uneconomic, Rystad’s Mr. Liles said.

Canadian oil and gas producers have begun to cut output on their own. Suncor Energy Inc. said this week it had reduced output at its Fort Hills oil-sands project. Husky Energy Inc. has said it has started shutting down production that is “cash negative on a variable cost basis at current prices.” 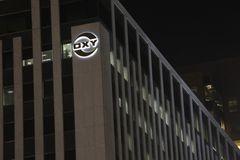 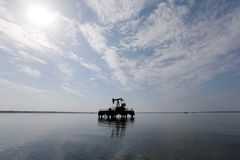