Major petrochemical companies operating in Canada oppose a looming federal ban on single-use plastics and believe product demand should be market-driven, not prescribed by government regulations.

Dow Inc. and Nova Chemicals Corp. said that while they support efforts to reduce plastic waste, they believe bans can lead to an increase in alternatives that are worse for the environment and generate more greenhouse gas emissions. The companies are two of Canada’s largest petrochemical players involved in the production of plastics, with facilities in Alberta and Ontario.

“Bans are limited in their effect because they do not address human behaviour related to waste management or significantly reduce the amount of debris that ends up in the environment,” Dow spokeswoman Adrianne Lovric said.

Nova’s president and chief executive Todd Karran said that while the company supports legislation that “drives all materials to be compostable, recyclable or recoverable," the focus should be on improving recycling programs and supporting sustainable innovation.

The Liberal government is poised to regulate plastics as part of a national plan to reduce the amount of packaging that is overwhelming municipal-waste programs and polluting waterways. With the recent release of a scientific assessment of plastic pollution, which provides the basis for taking regulatory action, Ottawa is on track to meet its 2021 target for a ban on certain single-use plastics.

The federal strategy is expected to include standards to ensure that some products comprise a certain percentage of recycled content, and a move toward waste programs that require manufacturers and sellers to manage the collection and recycling of the plastic they put into the market.

The production of resins, which are derived from hydrocarbons and form the base of all plastics, is concentrated in Alberta and Ontario. Alberta, which accounts for nearly 70 per cent of Canadian natural-gas production, is home to the largest hydrocarbon processing region in Canada. According to 2018 government figures, Alberta’s petrochemical manufacturing industry employs more than 7,500 people directly, with annual exports of $8.2-billion, making it the largest manufacturing sector in the province.

As public awareness increases about the relationship between plastics and fossil fuels, companies are increasingly eyeing plastic waste as feedstock for their chemical plants and introducing recycle-ready resins. These resins maintain their physical properties even after being repurposed multiple times through recycling.

Last fall, Dow announced that it was launching a low-density polyethylene resin made with 70 per cent recycled plastic, and Nova said it was introducing a suite of recycle-ready resins for use in packaging. Also last fall, Shell, which has petrochemical facilities in Alberta and Ontario, declared its ambition to use a million tonnes of plastic waste a year in its global chemicals plants by 2025.

Despite more than $8-billion of new investment in plastic-resin production facilities currently under construction in Alberta, and another $2-billion in Ontario, Premier Jason Kenney is warning Ottawa that regulatory uncertainty is top of mind for petrochemical players.

At a Feb. 25 Edmonton Business Association event, he spoke about a company considering a $10-billion project that would create up to 10,000 permanent and construction jobs in the Edmonton region. Mr. Kenney said the company told him that it was worried about the burden of possible federal regulations.

The Premier’s comments came just days after Teck Resources Ltd. announced it was withdrawing its federal regulatory application for the massive Frontier oil sands mine in northeastern Alberta, citing a lack of clarity out of Ottawa around reconciling natural-resource development with climate-change action.

The International Energy Agency predicts that by 2050, global oil demand for plastic production will surpass oil demand for road passenger transport. The Alberta government is not oblivious to this shift. A major aspect of the province’s effort to diversify the economy away from energy exports is to satisfy the growing desire for petrochemical products.

In an interview, Alberta’s Associate Minister of Natural Gas Dale Nally said he has not yet had any conversations with the federal government about Ottawa’s regulatory ambitions, but said moving aggressively on plastics would constitute “unimaginable” overreach and a flagrant attack on the province’s economy.

“It’s unthinkable that the federal government would be that obtuse that they would make those kinds of shortsighted decisions,” he said.

Mr. Nally would not disclose the name of the company Mr. Kenney was referring to in his remarks last month. However, he said his government is having “real conversations” about the project, which he insisted is “well past the pie-in-the-sky stage.” He also stressed that Alberta’s petrochemical industry is about more than just plastics, running the gamut from developing green tires to making agricultural fertilizers and injecting liquid carbon into cement.

Environment and Climate Change Canada said in an e-mail that the country’s petrochemical sector will play a crucial role in advancing innovative chemical-recycling technologies, which convert plastic waste into feedstock for the next production cycle. The department also pointed to a recent Deloitte study that found that substantially increasing the percentage of plastics that get recycled in Canada would lead to tens of thousands of jobs, while recovering billions in lost economic value and reducing greenhouse gas emissions.

Most plastic in Canada comes from ethane, a component of natural gas. An ethane cracker breaks down the gas – or cracks it – into ethylene, a key chemical ingredient for plastics such as polyethylene. Using crude oil to produce plastic feedstock generates roughly twice as much greenhouse gas emissions as using natural gas.

The majority of plastics produced in Europe and Asia rely on oil, and some producers in China use coal. It is estimated that three or four global-scale ethane crackers are needed each year to keep up with demand.

Mark Plamondon, executive director of the Alberta Industrial Heartland Association, said his group has been courting investment in value-added energy processing, and “multiple companies” are looking at petrochemical opportunities in the Industrial Heartland, northeast of Edmonton. He has not heard from investors who are considering pulling the plug on projects because of planned federal plastics regulations, but cautioned that anything causing uncertainty would be viewed as a knock against Canada.

“Capital is mobile,” Mr. Plamondon said. “You’re always being compared with competing jurisdictions in the world.”

The U.S. shale boom, combined with aggressive incentive programs mounted by state and local governments, has attracted hundreds of billions of dollars in petrochemical investments in the past decade. The flow of money into Canada, meanwhile, has been far slower.

To court investment, Alberta’s then-NDP government unveiled a petrochemical diversification program (PDP) in 2016. The first phase of the program, which provided $500-million in royalty credits, spurred $8-billion in investments in projects that will produce polypropylene thermoplastic, as well as other chemicals. The second phase of the program, which will provide up to $1.1-billion in credits, has continued under the United Conservative government after it won the 2019 election.

Mr. Nally said the government is reviewing phase-two applications and considering all opportunities to diversify Alberta’s downstream mix. “I would absolutely love to build an ethane cracker,” he said, adding that it is not his government’s sole focus.

Alberta is currently home to four ethane-cracking facilities, including two of the world’s largest. Mr. Nally also said that after consulting with industry, he is reviewing the PDP to “see if we can make a really good program even better.” 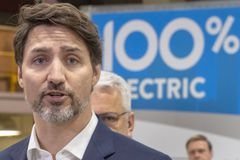 Why Enbridge could be a good pick in the market meltdown
March 6, 2020 Follow Kathryn Blaze Baum and Emma Graney on Twitter @KBlazeBaum @EmmaLGraney
Report an error Editorial code of conduct
Due to technical reasons, we have temporarily removed commenting from our articles. We hope to have this fixed soon. Thank you for your patience. If you are looking to give feedback on our new site, please send it along to feedback@globeandmail.com. If you want to write a letter to the editor, please forward to letters@globeandmail.com.
Comments