Canadian cannabis and psychedelics companies that have been eyeing the U.S. market have a few new reasons to celebrate.

Experts say the growing support for cannabis and psychedelic drugs in the United States could be a boon for its neighbours to the north.

“A lot of the players here have gone through ups and downs in the industry, learned what to do and not to do and are now able to perhaps apply some of those learnings to the U.S. market.”

He pointed to the Safe Banking Act, a Democratic bill with some Republican support stalled in the U.S. Senate. It would allow financial institutions to work with cannabis companies without retribution and could pass under a new administration.

“If you’re a Canadian company looking to get into retail down south, that’s potentially a game-changer for you in terms of access to capital,” Khan said.

Biden and Harris could also be good for cannabis companies because they committed to decriminalizing pot and expunging criminal records related to its possession, he said.

“On the flip side, a Donald Trump victory would mean more status quo and I don’t think that’s necessarily a bad thing for gaming companies because it just gives them that much more time and it allows capital to move back ... into Canadian companies,” said Deepak Anand, the chief executive of Materia Ventures, which produces and distributes medical cannabis.

The U.S. election came as the Canadian cannabis sector is facing turmoil. The optimism that circled the industry two years ago, when cannabis was legalized in Canada, has largely dissipated.

Pot companies now are restructuring and laying off thousands of workers. Industry closures, mergers and acquisitions are materializing and many believe more are on their way.

A U.S. toehold could be a step to reversing those trends, said David Culver, Canopy Growth Corp.`s head of U.S. government relations.

“There’s a lot of eyes in Canada on the U.S. market, and we’re excited about the possibilities there because it will have a very positive impact on my company and many others,” he said.

He believes U.S. election developments signal the growing normalization of cannabis and indicate where policies can be pushed further forward, even during the pandemic.

For example, he said states facing ballooning budget deficits will be “looking under every rock” for tax revenue. Cannabis-friendly policies could create a cash injection while signalling that they are open for businesses in the sector.

When states are ready for cannabis, he said, Canopy has the “crystal ball” advantage because it knows how legalization works from its experience in Canada and can easily deploy strategies it used before.

“This is the right moment to improve financial systems, address social injustices, and realize the potential benefits of sound, evidence-based cannabis public policy,” he said in an e-mail. “Aurora remains focused on and optimistic for the U.S. CBD market and long-term prospects for federal legalization.”

It’s not just cannabis companies that stand to win through the U.S. election.

Companies working hard to normalize psychedelics and get them seen as potential aids in the fight against mental illness can reap rewards too, said Ronan Levy, Field Trip Health Ltd.'s chief executive.

His Toronto-based company, which has been exploring ketamine-enhanced psychotherapy, believes the psychedelic drug industry will grow and may become more significant than the cannabis sector.

Oregon’s support for the growth, administration and sale of psilocybin mushrooms in licensed facilities is a “bellwether,” Levy said.

“We know for a fact that other states were looking to move forward with a ballot similar to Oregon, but got really sidelined by the pandemic ... I think this is really going to drive the industry forward.”

The U.S.'s large population and influence may also change consumer sentiment and hesitation around psychedelics, creating an opportunity for Canadian companies, he said.

From magic mushrooms to gig workers: Other issues voted on in the U.S. election
4:15
November 6, 2020 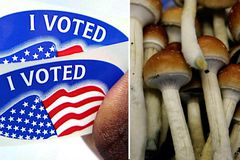