Mark Rendell
Published May 31, 2021 Updated May 31, 2021
For Subscribers
Comments
Text Size
Please log in to listen to this story. Also available in French and Mandarin. Log In Create Free Account

Canadian companies are struggling with supply-chain bottlenecks as the postpandemic economy starts to take shape, squeezing margins and putting upward pressure on prices.

Wholesalers and retailers are reporting months-long delays for shipments from suppliers in Asia. Canadian manufacturers are scrambling to source raw materials, paying elevated prices for scarce commodities and passing those costs along to customers.

Pressure on North American supply chains has been building since last summer. Now rising transportation, storage and commodity prices are showing up in producer and consumer prices, just as large parts of the economy are preparing to reopen and concerns about inflation are on the rise.

The question for importers and central bankers alike is whether these disruptions are temporary, as the network of global manufacturing and trade resets after the shock of COVID-19, or whether capacity constraints and backlogs will feed into more permanent price increases.

“We’re speaking to customers that are saying, ‘We haven’t had an import container in four to six weeks, prices have quadrupled, and our margins can’t really manage that,’ ” said Jon Chiniborch, vice-president of sales and marketing at Pival International, a third-party logistics company based in Montreal. “We’re not expecting this to change over the next six months.”

Costs are rising all along the supply chain. The Bank of Canada commodity price index, which tracks 26 commodities, is at its highest level since 2014. In China, the world’s consumer goods manufacturing hub, factory-gate prices rose 6.8 per cent year-over-year in April, the biggest jump since October, 2017.

Meanwhile, the cost of shipping a container to the West Coast of North America from China has increased more than 300 per cent over the course of the pandemic – that is, if you can secure a spot on a container ship in the first place.

The strong Canadian dollar is helping absorb some of these increases. But margins are being squeezed and businesses are starting to pass costs along to consumers.

“It’s very rare that we will absorb any price increases, [and] as people understand there is clearly signs of inflation everywhere, not just in [the manufactured] product, but in our logistics and our labour,” Sleep Country chief executive officer Dave Friesema told analysts on a call this month.

A survey published last week by the Canadian Federation of Independent Business found that small companies plan to raise their prices by an average of 3.3 per cent over the next year, which is the highest reading since data collection began in 2009.

The bottlenecks are not unique to Canada. Over the course of the pandemic, factory closings, commodity shortages and both natural and man-made disasters – including the six-day blockage of the Suez Canal by a massive container ship in March – have disrupted manufacturing and trade. Auto manufacturing has been hit particularly hard by a global shortage of semiconductor chips, leading several large car makers to suspend operations at factories in Ontario and elsewhere.

But continuing supply-chain congestion is as much about demand as supply. Early in the pandemic, factories slowed production owing to both health concerns and because they expected demand for goods to plummet, as typically happens during recessions. The latter assumption quickly turned out to be wrong.

With lockdowns limiting spending on vacations and restaurants, people began splurging on electronics, home decor and recreational products. Most of these goods are made in Asia, leading to a boom in trans-Pacific shipping and pile-ups at container ports in China and North America.

“You have a scenario where we don’t know how to forecast [demand], we have slowed down production ... then there’s this rising consumer demand, which we’ve never seen before, plus the rising demand of e-commerce,” said Jérôme Thirion, a partner with KPMG Canada Management Consulting, and head of the firm’s national supply chain and operations team. “This is a scenario for which nobody was prepared. Hence the bottlenecks.”

The most visible sign of this is the fleet of container ships bobbing off the coast of California. At peak congestion in February, there were more than 60 ships anchored off Los Angeles, waiting an average of eight days to unload their cargo.

British Columbia’s much smaller container ports have seen less dramatic backlogs. But there has been a marked increase in the number of container ships anchored in Vancouver’s English Bay and off Prince Rupert in recent months.

Peter Xotta, vice-president of planning and operations at the Vancouver Fraser Port Authority, said the delays are caused by both a jump in container traffic – up 20 per cent in the first four months of the year, compared with the previous year – and ships running behind schedule.

“One of the characteristics across the board on the West Coast is that vessels are not showing up when they’re supposed to, mostly because of congestion in Asia,” Mr. Xotta said.

“These decisions reduced potential delays by 30 per cent to 50 per cent,” she said.

The redirection of ship traffic has been great for business at Canadian container terminals, said Robert Lewis-Manning, president of the Chamber of Shipping. But it did lead to congestion across the Canadian transportation system, particularly in the early months of the year.

“It was happening at the same time we were having record grain exports [from late fall through to around March]. So then you get into a battle for the railroads,” Mr. Lewis-Manning said.

“The fall period might be interesting if we see a strong agricultural export market again and continued demand for imports through containers. As businesses reopen this summer, the demand for goods is expected to increase so the fall will likely be busy,” he said.

Further along the supply chain, changing consumer and business behaviour is showing up in unprecedented demand for warehouse space. Vacancy for industrial real estate in the Greater Toronto Area is at an historic low of 0.5 per cent, and lease rates are up 26 per cent since the start of the year, said Garry Watts, vice-president and sales representative at Colliers International.

“It used to be just-in-time inventory. Now with the disruption in the supply chain, we’re seeing companies building and leasing buildings to maintain an inventory, so they can sell from a rack versus an empty rack,” Mr. Watts said.

At the same time, the boom in e-commerce is fuelling demand for massive distribution centres. Amazon alone has leased 12 million square feet of warehouse space across Canada since 2019, and other retailers are scrambling to keep up, Mr. Watts said.

He doesn’t expect vacancy in the GTA warehouse market to increase for at least two years, when several new developments are scheduled to come online. In the meantime, companies are having to look further afield, to cities like Hamilton, for affordable warehouse space.

On the labour side of the equation, costs are being driven by health and safety measures as well as shortages of workers. In cities such as Vancouver, said Mr. Chiniborch of Pival, “the demand on warehousing is so high that the local warehouse associate can go next door and demand $5 or $10 an hour more because he’s a skilled forklift operator, and they’re gone.”

All of this is feeding into worries about inflation. The Consumer Price Index in Canada rose 3.4 per cent year-over-year in April, the fastest annual pace of inflation in nearly a decade. Much of this increase was the result of transitory factors, mainly year-over-year gasoline price comparisons to early pandemic lows. But there was a broad-based 0.6-per-cent increase in consumer prices month-to-month, which is not explained by “base-year” effects.

At a news conference the day after the April CPI release, Bank of Canada Governor Tiff Macklem reiterated the central bank’s position that the current spike in inflation will be temporary, and that persistently high levels of unemployment will pull the rate of inflation back toward 2 per cent later in the year.

When it comes to supply-chain capacity, a lot depends on how much consumers pivot back to spending on haircuts, restaurants and vacations in the coming quarters, and away from goods carried on container ships and stored in warehouses.

“We do foresee that it’s going to shift in the next 12 to 18 months back to normal,” Mr. Chiniborch said. “But consumer spending is still going to be strong for Q2 and Q3. … And when consumables are up, this means strong imports and container demand.” 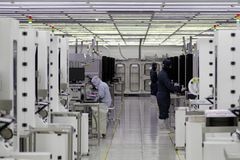 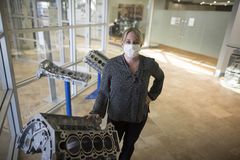