The flow of Canadian money into U.S. and foreign equities has gone into reverse for the first time on record.

Canadian investors have reduced their holdings of international stocks by about $12-billion so far this year, bucking a trend that goes back to at least the late-1980s, when Statistics Canada started tracking cross-border portfolio transactions.

The retreat started with last December’s growth scare and global sell-off. But even as stock markets have regained their footing, and U.S. equities have stormed back to record highs, Canadians have not regained their appetite for non-Canadian stocks.

“Even during the tech meltdown or the financial crisis, we never saw a full 12-month period of net selling of foreign equities by Canadian investors,” said Doug Porter, chief economist at Bank of Montreal. “That is something new.”

U.S. stocks in particular have formed a crucial and growing component of Canadian portfolios in recent years. In the decade since the global financial crisis, waning resource prices and tech-stock supremacy have relegated the Toronto Stock Exchange to perennial underperformer.

Individual investors and fund managers have steadily shifted their focus beyond Canada’s borders as a result. Even mutual funds with domestic mandates have increasingly relied on U.S. stocks to boost returns. The average Canada-focused mutual fund now has roughly one-fifth of its assets in non-Canadian stocks, primarily U.S. tech and health care, according to a recent CIBC World Markets report.

Such heavy weightings alone likely meant U.S. stocks were candidates to sell once Canadians were in the mood to reduce risk.

Canadian portfolio flows into U.S. equities tend to follow the S&P 500 index, with a lag of about one month. In 2017, as Corporate America was reaping the benefits of tax reform and the resulting jump in profits, Canadian investors tracked the S&P 500 upward, with record net purchasing of nearly $70-billion for the year.

In December, 2018, on the other hand, the S&P 500 declined by 16 per cent over a period of three weeks over fears that the U.S.-China trade war would tip the global economy into recession. The following month, Canadians pulled a net $10.9-billion from foreign stock markets.

Canadian investors, however, are not chasing that performance as they typically have. Instead, they’ve been strong buyers of foreign bonds, “which would suggest that Canadians are shielding themselves from uncertainty with debt purchases,” CIBC World Markets economist Katherine Judge said.

Canadians are not alone in their caution toward the world’s largest stock market. Last month, Goldman Sachs forecast that non-American investors would pull a total US$175-billion out of U.S. equities this year, with global trade tensions cited as particularly harmful to international investor sentiment.

Even U.S. investors have sold off domestic equities in favour of safer assets, with the gap between U.S. equity fund outflows and inflows into cash and bond funds widening to its largest since 2008, Goldman Sachs said.

Corporate buybacks have more than offset those outflows, helping to prop up demand for equities and keep U.S. indexes on the rise. And if history is any guide, continued positive returns in U.S. stock indexes will soon see a resumption of inflows, including from Canadian investors, BMO’s Mr. Porter said.

“I don’t think Canadians have lost their appetite for foreign equities.”

Land of oligopolies: A compelling case for a heavy weighting in Canadian stocks Subscriber content

Opinion
Should you jump on Laurentian Bank’s savings account with the 3.3-per-cent interest rate? 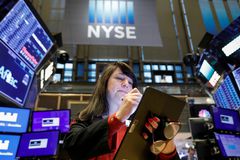