With a devastating war still raging on, the Tigray region in northern Ethiopia has become a land of famine, massacres and brutal destruction. Its suffering has led to allegations of genocide, threats of sanctions and fears of a humanitarian catastrophe.

But some Canadian gold-mining companies see Tigray as something else: a potential bonanza. Their jostling for mineral rights has continued even as the war deepens, with the miners confident that the region holds billions of dollars in gold.

At least two Vancouver-based junior companies have been in contact with the Ethiopian government during the Tigray conflict this year, pushing to secure licences and rights for their projects in the region.

One of the companies, East Africa Metals Inc., has privately written to the government to suggest that its partners are ready to invest US$120-million in Tigray. In the same letter, the company demands improvements to the security of its tenure, so that it can fend off claims from a rival Canadian company.

The lobbying by the Canadian miners has sparked criticism from Canadian and Tigrayan activists, who are concerned that the investments could influence Ottawa’s position on the war and could encourage Ethiopia to prolong its military campaign in Tigray.

East Africa Metals has repeatedly stated, in press releases and social-media comments in recent months, that it is close to resuming operations in Tigray.

In its letter to the Ethiopian government earlier this year, obtained by The Globe and Mail, the company said it has found US$3-billion in gold in Tigray and is “prepared to initiate its exploration and construction programs.”

On its website, the company promotes Tigray as the historic home of King Solomon’s Mines – fabled for centuries for their legendary wealth. It says it has invested more than US$50-million in the region in recent years.

The second company, Parallel Mining Corp., announced on Sept. 22 that the Ethiopian Ministry of Mines had granted it an exploration licence for gold and base metals at a site in Tigray. In an earlier deal in February, the company purchased a 95-per-cent interest in two mining property licences in Tigray from the Ethiopian government, describing their gold potential as “incredible.”

Chinese mining companies are also active in Tigray, partly owing to deals with Canadian miners. East Africa Metals has sold a 70-per-cent interest in one of its Tigray projects to China-based Tibet Huayu Mining Co., and it has reached agreement to sell a 70-per-cent stake in another Tigray project to Zijin Mining Group Co., Ltd.

In total, at least six Canadian-based companies hold active licences in Tigray, covering more than 2,600 square kilometres of the region, according to a leaked report in June by a consultant to a Canadian-funded program that supports Ethiopia’s mining sector.

The six-year, $15-million program, financed by Canada’s Global Affairs department, was launched in 2016. It aims to improve licensing, governance and geoscience in Ethiopia’s mining industry, partly by adapting policies from Canada’s own mining sector.

“Aiding the Ethiopian government in this way has directly benefited Canadian mining interests across the country, but most alarmingly in the Tigray region where the governments of Ethiopia and Eritrea have been accused of engaging in genocidal activity,” said the leaked report by Sidney Coles, a consultant who evaluated the Canadian-funded project for one of its partners, the Canadian Executive Service Organization.

The Ethiopian government wants to expand its mining exports to 10 per cent of GDP over the next decade, compared with less than 1 per cent today. But it cannot fully realize its mining potential without the technological expertise and equipment of Canadian and other mining companies, the consultant’s report said.

It suggested that the Canadian government could be softening its criticism of human-rights abuses in Tigray as a way of “protecting its development aid investment and the interests of Canadian mining companies.”

John Babcock, a spokesman for Global Affairs Canada, denied this allegation and noted that Canadian officials had issued a number of statements of concern about alleged atrocities in Tigray.

In June, the Canadian embassy in Ethiopia tweeted that the Canadian ambassador, Stéphane Jobin, had met with Ethiopia’s Mining Minister, Takele Uma Banti, to discuss the potential for further investment in the mining sector “when conditions allow.” The tweet was later deleted.

Mr. Babcock said the tweet was deleted because it “could have been to be seen to be related to the ongoing conflict in Ethiopia, which was not the intention.”

He confirmed that two Canadian mining companies with assets in Tigray have been assisted by Canada’s trade commissioner service, although he did not name them. Both companies have suspended operations in Tigray since the beginning of the war last November, he said.

East Africa Metals and Parallel Mining did not respond to e-mailed questions from The Globe about their Tigray operations. From their public statements, however, it is clear that they have continued to pursue licences and other activities in Tigray since the beginning of the war.

In May, for example, East Africa Metals said it had “productive meetings” with Ethiopian officials and expected that commercial activity in Tigray “will normalize in the near future.” It also announced plans for a $2.7-million exploration program in Tigray.

In a series of tweets from June to September, the company repeatedly suggested that it was close to resuming its drilling and mine construction in Tigray.

And in its letter to the Ethiopian government in March, company president Andrew Lee Smith said the company’s partners are ready to invest US$120-million in the construction of two mines in Tigray. “Drilling companies have been contracted and fully pre-paid, equipment has been mobilized to Ethiopia and has been in storage since February 2020,” he said.

Mr. Smith’s letter complained that Parallel Mining was seeking an exploration licence on a site in Tigray where East Africa Metals already owns the exploration rights. He threatened to launch legal action against the government if it did not recognize his company’s rights at the site. This, in turn, would damage Ethiopia’s reputation and cause “embarrassment” to the Canadian government, he said.

Activists are criticizing the Canadian government and the mining companies for their activities in Ethiopia. “Canada has been more interested in promoting and facilitating Canadian mining investment than in reinforcing human rights, justice and equality,” said Jamie Kneen, communications co-ordinator at MiningWatch Canada, an independent Ottawa-based group.

“No one should be investing where there is a significant risk that they may be benefiting from, rewarding, or contributing to serious human-rights violations,” he told The Globe.

Teklehaymanot Weldemichel, a Tigrayan scholar at the Norwegian University of Science and Technology, said the Ethiopian government has been desperate for revenue to pursue its expensive Tigray military campaign, and the Canadian investments could be a source of that revenue. Many Tigrayans have been disappointed in Canada’s pursuit of mining prospects in the region, he told The Globe in an interview.

Fesseha Tessema, an adviser to the Tigray People’s Liberation Front, the insurgent militia that controls much of the region, said the Canadian government has been relatively quiet on the Tigray conflict, compared with other countries, and the influence of the mining companies could be the reason.

“There can be only one logical reason for Canada’s silence on Tigray: lobbying by its mining companies,” he told The Globe in an interview.

Zecharias Zelalem is Special to The Globe and Mail 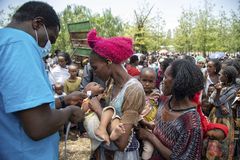