Companies in Canada’s oil patch are slashing capital budgets and warning of job cuts as the spread of the coronavirus and a crude production spat between Saudi Arabia and Russia glut global oil supplies and send prices plunging.

Calgary-based Cenovus Energy Inc. cut its capital budget by 32 per cent Tuesday, putting possible expansions at both Christina Lake and Foster Creek on hold and suspending the majority of its planned capital spending at the company’s Deep Basin and Marten Hills operations.

The Cenovus decisions follow moves by Ovintiv Inc., formerly Encana Corp., to reduce its capital budget and rein in spending. Late Tuesday, MEG Energy Corp. announced it would cut its 2020 capital spending by 20 per cent to $200-million.

Cenovus said in a statement it will continue “modest spending” on engineering and permitting for a potential diluent recovery unit, but it doesn’t intend to sanction any new projects and will look for more operational and capital spending reductions “if necessary.”

Ovintiv’s stock price fell by more than 70 per cent and Cenovus lost half of its share price value Monday as a global oil price war sent crude prices diving to their lowest levels in four years, battering energy stocks and threatening to deepen the economic downturn in Alberta. Both companies’ stock prices recovered slightly Tuesday.

The TSX Composite Index fell by more than 10 per cent on Monday. Western Canadian Select crude prices crept back past $20 Tuesday after a $17.80 low on Monday, reflecting a gentle uptick in share prices for Canadian producers including MEG Energy and Frontera Energy Corp., but the overall picture was far from a general recovery.

That has led Alberta’s Premier and Energy Minister to crisis talks with the energy sector. They met with large and small-scale producers, drillers, pipeline companies and the oil service sector this week to understand the extent of the damage.

Speaking with The Globe and Mail during a brief break between meetings, Energy Minister Sonya Savage said while she didn’t want to paint a grim picture, the industry is cutting capital expenditures, scaling back drilling programs and can expect potential job losses.

"We are in a very, very uncertain time and a very precarious situation," she said.

“We don’t know where the price is going to go and for how long.”

To deal with languishing prices, Cenovus has suspended its crude-by-rail program. That means the company will no longer take advantage of Alberta’s special production allowance program, implemented by the United Conservative government to try to boost oil activity in the face of mandated production cuts. The scheme allowed companies to exceed their production limits as long as crude was shipped out via rail.

While companies wrestle with capital plans, they are keeping their eye on an unsteady global energy situation as Saudi Arabia and Russia raise the stakes in a production standoff that has caught Canada in its crossfire. The spat began after OPEC+ countries gathered to address the fall in crude demand because of the coronavirus, but they couldn’t reach a deal.

Saudi Arabia announced Tuesday it will raise its crude supply to a record high in April as it appeared to reject Russian overtures for new talks. The clash of the two oil titans sparked the 25-per-cent slump in crude prices on Monday, triggering panic selling and heavy losses on Wall Street’s main stock indexes, already hit badly by the coronavirus outbreak.

Amin Nasser, chief executive of Saudi Aramco, said the oil giant would increase supply to 12.3 million b/d next month for customers inside the kingdom and abroad. That’s 300,000 b/d above its maximum production capacity, indicating Aramco may also free up crude from storage.

“It is frustrating, because we have done so much in Alberta to turn the economy around, to get our sector healthy, to get Albertans back to work, and these are events completely out of our control,” Ms. Savage said. 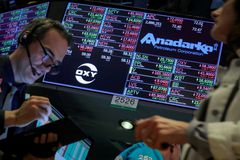 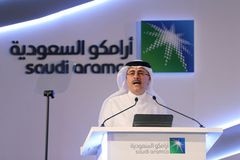 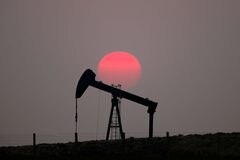