In a rare united front between environment and energy, oil well drillers in Western Canada are exploring the emerging geothermal market in an effort to put oil rigs back to work, pivoting to green technology while fossil fuel markets struggle with extreme production curtailments and a dearth of activity in the sector.

As the federal government works on postpandemic economic stimulus plans, industry groups, geothermal and oil drilling companies have created an alliance with Clean Energy Canada to promote development of the renewable technology in Canada. The group hopes to highlight the sector as one ripe for incentives and investment, which can create jobs for displaced oilfield service workers.

Energy-service companies are the contractors who do the actual drilling, fracking and other jobs for oil companies that call the shots. They are the first to feel the pinch when capital is cut. They came into the pandemic-induced energy crisis still hurting from the oil price plunge of 2014 and the resulting recession, which put demand for their services at historic lows.

The geothermal process extracts heat in the form of hot water or steam from several kilometres inside the Earth. The heat is used to generate electricity through large power turbines. Unlike solar or wind energy, it can provide continuous electricity to the grid.

Oil drilling rigs are flexible enough to be used in the geothermal sphere. In addition to oil and gas, they’re already used for uranium and potash, and in a few geothermal operations.

Geothermal alliance member Kevin Krausert, president and chief executive officer of Alberta-based Beaver Drilling Ltd., doesn’t expect oil and gas drilling to pick up in Canada over the next 18 months. He sees geothermal as an opportunity to create new lines of business and put people back to work.

“It pivots the whole tired narrative of energy versus the environment. This is a clear example of oil and gas and environment building a new energy future for Canada where oil and gas is a part of the solution,” Mr. Krausert told The Globe and Mail.

Rather than an energy sector that pits oil and gas against renewables, Mr. Krausert wants to see an integrated system where technologies like geothermal can be used to run oil sands operations and reduce their per-barrel emissions.

"We’re partnering with groups we haven’t partnered with in the past, because we all share the same goal.”

“We can use our Canadian ingenuity and our experience and our resources to transition to this clean energy economy. This proposal to develop a strong Canadian geothermal sector is creating a great opportunity for Alberta and for Canada to move forward on expanding its clean energy sector and jobs,” she told The Globe.

He said geothermal has never been a major player in Canada, and could be left behind altogether unless there is political will to encourage investment or expansion of the green fuel.

He has high hopes the co-operation between the environmental movement, the oil industry and his own sector will change that, billing the agreement as a triple victory for the environment, the economy and jobs.

“At the end of the day, the oil and gas service contractors and people in the green movement realized that this is a great win-win-win. This is a case where you can have your cake and eat it too,” he said.

That’s not to say geothermal will replace oil and gas as the bread and butter of the drilling sector.

Mark Scholz, president and chief executive of the Canadian Association of Oilwell Drilling Contractors, said he supports the co-operative effort, but emphasized it won’t save the drilling industry. His association continues to pursue liquidity and support measures from Ottawa.

“During these times, where there’s not a lot of opportunities for a drilling rig contractor in this market - particularly when you have negative pricing - if we can somehow create this new market, it’s going to certainly benefit drilling contractors down the road and also in this economy,” he said.

“At the end of the day, our objective is we want to put more rigs to work, full stop. We want to get our people in the field and we want to use their equipment. If this creates an opportunity, we’ll take it.”

Alberta Energy Minister Sonya Savage told The Globe in a recent interview that although oil and gas remains the province's main economic driver, diversifying the energy sector will be important as Alberta recovers from the health crisis.

“If we’re looking at and pursuing some of these other things – helium, geothermal, hydrogen – nobody should fear that. You need both,” she said. 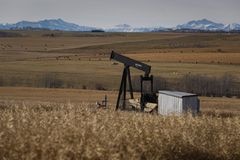