Canadian universities funded by Huawei Technologies Co. Ltd. have shrugged off a decision by the University of Oxford to stop taking research money from the Chinese telecommunications giant, saying that move and other recent developments have not changed their relationships with the company.

Oxford, one of the world’s leading academic institutions, said on Thursday it “will not pursue new funding opportunities” to underwrite research or for donations, citing “public concerns raised in recent months” related to the company’s partnerships in Britain.

Similar concerns have dogged Canadian universities since a Globe and Mail investigation last May revealed that Huawei had established relationships with leading research-intensive universities in Canada to create a pipeline of intellectual property the company is using to fortify its market position in next-generation, 5G wireless communications. The company has committed about $50-million to 13 universities and nearly 100 professors and their graduate students to work on Huawei-funded projects, which have also qualified for millions of dollars in government grants. Many of the academics, whose work is underwritten by Canadian taxpayers, assigned all intellectual-property rights to Huawei. Canada’s Department of Global Affairs has routinely granted export permits to Huawei to transfer the research to China.

Canadian universities told The Globe they will not follow Oxford’s lead of their own volition. “We’ve not had any change with regard to working with Huawei Canada,” said Vivek Goel, vice-president of research and innovation with the University of Toronto, whose faculty of electrical and computer engineering signed a $3-million funding deal with Huawei in 2016. He said unless and until the federal government directs it otherwise, the relationship remains intact.

“We’ve said previously we rely on the federal government to signal which companies are appropriate to work with and we’ve had no change in that signal,“ Prof. Goel said. He noted Canadian telecommunications providers continue to use Huawei equipment and the company remains eligible for government programs including research and development tax credits and matching grants for research work it sponsors from the Natural Sciences and Engineering Research Council.

“We will continue to evaluate all research projects and research investments with domestic and international partners on their merits and are prepared to accept and act on advice and direction from the government of Canada on issues of national security," University of Waterloo spokesman Nick Manning said.

Canada and Britain are reviewing whether to follow their partners in the Five Eyes intelligence-sharing network – the United States, Australia and New Zealand – and ban or scale back use of Huawei’s equipment in domestic 5G networks. Japan’s largest carriers and the Taiwanese government have also said they will not use Huawei’s 5G technology, and the Czech Republic, Norway and Germany are reported to be considering doing the same.

“What Canada needs are innovation and cyberstrategies that not only serve our prosperity and security objectives but also guide publicly funded institutions in how they should perform to those objectives," said Jim Balsillie, former chairman and co-chief executive of Research in Motion Ltd. (now BlackBerry Ltd.), who is a leading advocate for policies favourable to Canadian-based innovators. "It is irresponsible to pass decisions affecting national interest off to individual institutions or researchers. Alongside transferring billions of dollars into these organizations every year, the Canadian government needs a strategy to ensure these publicly funded institutions perform to national priorities.”

Three former Canadian intelligence chiefs have warned that using Huawei products and 5G technology in telecommunications networks could provide China with the capacity to conduct remote spying and modify or steal information or even shut down systems.

The chiefs of six U.S. intelligence agencies told the U.S. Senate intelligence committee in February that Huawei’s 5G technology could be used for espionage and to “exert pressure and control” on U.S. infrastructure. Officials with the Canadian Security Intelligence Service warned research vice-presidents from a group of Canadian universities last fall to be cautious about their relationships with Huawei amid growing cyberintelligence concerns.

Tensions between Canada and China have heightened in the past two months over another Huawei-related issue: the arrest in Vancouver of the company’s chief financial officer, Meng Wanzhou, daughter of company founder Ren Zhengfei, at the request of U.S. authorities who want her to face charges related to sanctions against Iran.

China warned of “serious consequences” against Canada if Ms. Meng is not released and arrested two Canadians, former diplomat Michael Kovrig and entrepreneur Michael Spavor. A Chinese appeals court ruled this week that Canadian Robert Schellenberg, previously sentenced to 15 years in jail for drug smuggling, should face the death penalty.

Huawei is under pressure elsewhere. U.S. prosecutors this week launched a criminal investigation into Huawei over allegations it stole U.S. trade secrets. Earlier this month, Poland arrested a Chinese employee of Huawei and a former Polish security official on spying allegations. That followed a call last month by Huawei chairman Ken Hu for the United States and its allies to prove it poses security risks and is a pawn of Beijing’s ruling Communist Party.

This week, China’s ambassador to Canada, Lu Shaye, said his country would retaliate if Ottawa banned Huawei from supplying 5G gear. Canadian universities have expressed concerns the diplomatic rift with China could negatively affect enrolment of Chinese students, who account for one-third of all foreign-student enrolments in this country. 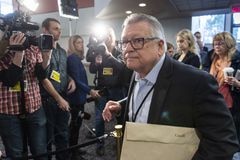 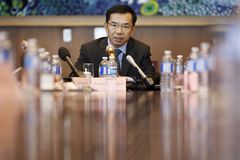