Catalyst, a Toronto-based fund controlled by financier Newton Glassman, snapped up a portion of a 10-per-cent stake in HBC from the Ontario Teachers’ Pension Plan Thursday, according to a Catalyst spokesperson. Catalyst is known for diving into distressed investments, and frequently uses litigation as part of its business strategy.

The spokesperson said Catalyst will argue that the current $9.45-a-share offer for HBC from Mr. Baker and his partners undervalues the company’s real estate and the potential for a turnaround at its department stores, which include its namesake chain, Lord & Taylor and Saks Fifth Avenue. The fund will make its pitch to a committee of HBC’s independent directors, who are currently assessing the buyout offer. Catalyst’s thesis is that HBC, which was founded in 1670, can use technology more effectively to win a larger share of the online shopping market.

The fund controls publicly traded distressed-lender Callidus Capital Corp., which it took public five years ago at $14 a share and now trades at 46 cents. However, Catalyst partner Gabriel de Alba, who is responsible for the HBC investment, successfully oversaw the restructuring of European real estate company Geneba Properties NV, which owned warehouses and light industrial buildings in Germany and the Netherlands. Catalyst invested $101-million in Geneba in 2012 and made a 19.5-per-cent annualized return when it sold the company in 2017.

Catalyst joins a growing list of institutional investors and analysts opposed to selling HBC at the price Mr. Baker is offering. Last week, Stamford, Conn.-based Land & Buildings Investment Management LLC slammed Mr. Baker’s bid as “woefully inadequate.” Land & Buildings is asking the company to explore all “strategic alternatives,” including a sale. Jonathan Litt, founder of Land & Buildings, said in a letter to HBC’s special committee that the offer should be raised to $18 a share.

Toronto-based HBC announced financial results after Mr. Baker tabled his offer in early June, and reported 2.4 per cent growth in sales at Saks and a $275-million quarterly profit, due in part to a $817-million gain on the sale of Lord & Taylor’s New York flagship building.

CIBC World Markets Inc. analyst Mark Petrie reviewed the chain’s performance and said in a report that HBC owns iconic properties and “with an improving retail business under competent leadership, we believe this is not adequately reflected in the $9.45 offer.” He said: “In our opinion, a range of $10.25-$11.25/share would more appropriately reflect today’s value.”

HBC shares closed Monday at $9.81 on the Toronto Stock Exchange, up 8 cents. The stock has consistently traded above Mr. Baker’s offer since shortly after the bid was announced, a sign for some investors that the buyout offer will be sweetened. Mr. Baker gained control of HBC in 2008 when the company was private, then took it public in 2012 by selling shares for $17 each.

Back in January, the Ontario Teachers’ fund agreed to sell an 18-million-share stake in HBC to Mr. Baker’s group for $9.45 a share. The transaction failed to close as scheduled this month and the pension plan subsequently sold its position into the public markets in trades done last Thursday by TD Securities Inc. 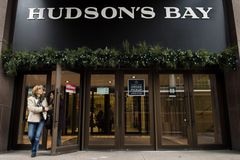 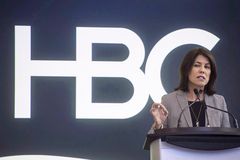