Coronavirus information
The Zero Canada Project provides resources to help you make the most of staying home.
Visit the hub
Gabriel Crossley and Kevin Yao
BEIJING
Reuters
Published July 15, 2020 Updated July 16, 2020
For Subscribers
Comments
Please log in to listen to this story. Also available in French and Mandarin. Log In Create Free Account

China’s economy returned to growth in the second quarter after a deep slump at the start of the year, but unexpected weakness in domestic consumption underscored the need for more policy support to bolster the recovery after the shock of the coronavirus crisis.

Asian share markets and the Chinese yuan fell, partly reflecting the broad challenges facing the world’s second-largest economy as it grapples with the double-whammy of the pandemic and heightened tensions with the United States over trade, technology and geopolitics.

Gross domestic product (GDP) rose 3.2 per cent in the second-quarter from a year earlier, the National Bureau of Statistics said on Thursday, faster than the 2.5 per cent forecast by analysts in a Reuters poll, as lockdown measures ended and policy-makers ramped up stimulus to combat the virus-led downturn.

The bounce was still the weakest expansion on record, and followed a steep 6.8 per cent slump in the first quarter, the worst downturn since at least the early 1990s.

Those risks were partly reflected in separate retail data that showed Chinese consumers kept their wallets tightly shut, pointing to a bumpy outlook at home and overseas, as many countries continue to grapple with the COVID-19 pandemic – led by surging infections in the United States.

Though June indicators and GDP numbers largely beat expectations, Rodrigo Catril, a foreign exchange strategist at NAB in Sydney, said they also revealed “the China consumer remains behind in terms of the recovery story.”

“It’s very much a story of government stimulus-led recovery, which is very much focused on the industrial side. The consumer remains very cautious. That cautiousness is something the market is looking at in terms of countries where the consumer plays a bigger role, so that’s obviously relevant for the U.S. as well.”

Retail sales were down 1.8 per cent on-year in June – the fifth straight month of decline and much worse than a predicted 0.3 per cent growth, after a 2.8 per cent drop in May.

Domestic job losses have been one of the worries for consumers, as many businesses struggled to stay in the black.

Wanda Film, for example, China’s largest cinema chain operator which has more than 600 cinemas, on Tuesday warned of a first half net loss of 1.5-1.6 billion yuan ($214-228 million), after the coronavirus kept its cinemas shut for almost the entire period.

In the first half of the year, the economy contracted 1.6 per cent from a year earlier, underscoring the sweeping impact of the virus which first emerged in China late last year and has killed over 583,000 people worldwide.

The rising tensions with the United States and the pandemic have added to structural issues that China has been facing for years, including demographic changes, overinvestment, low industrial productivity and high debt levels.

On a quarter-on-quarter basis, GDP jumped 11.5 per cent in April-June, the NBS said, compared with expectations for a 9.6 per cent rise and a 10 per cent decline in the previous quarter.

The government is expected to offer more support on top of a raft of measures already announced, including fiscal spending boost, tax relief and cuts in lending rates and banks’ reserve requirements.

But debt worries have kept a leash on China’s stimulus tap. Net fiscal stimulus unveiled so this year amounted to just over 4 trillion yuan ($571.76-billion), much restrained compared the spending burst in other major economies including the United States and Japan.

The Institute of International Finance estimates China’s total debt rose to 317 per cent of gross domestic product in the first quarter of 2020, up from 300 per cent in late 2019 and the largest quarterly increase on record.

The industrial economy offered some hope for the nation as it tries to regain its footing, with output in the vast sector rising 4.8 per cent in June from a year earlier, the third straight month of growth, the data showed, quickening from a 4.4 per cent rise in May.

Fixed asset investment fell a less-than-expected 3.1 per cent in the first half from the same period in 2019, moderating from a 6.3 per cent decline in the first five months, while real estate investment growth also quickened to 8.5 per cent in June, thanks to the credit boost.

While the International Monetary Fund has forecast China to expand 1.0 per cent for the full year, the only major economy expected to report growth in 2020, many analysts caution about the outlook.

“Domestic demand will drive China’s recovery ahead, but external demand could be a risk to the growth outlook given the possibility of large second round of coronavirus infections overseas,” said Oshimasa Maruyama, chief market economist at SMBC Nikko Securities in Tokyo. 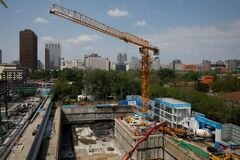 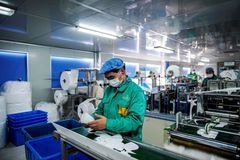